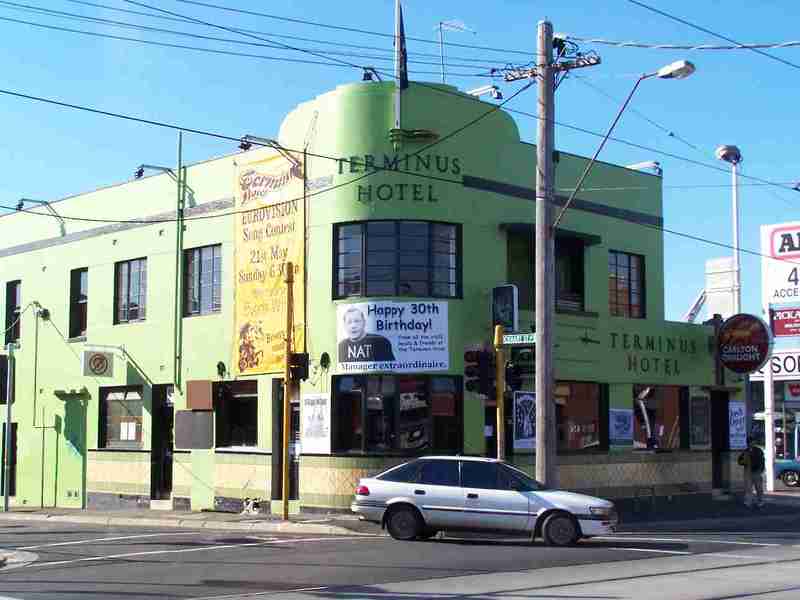 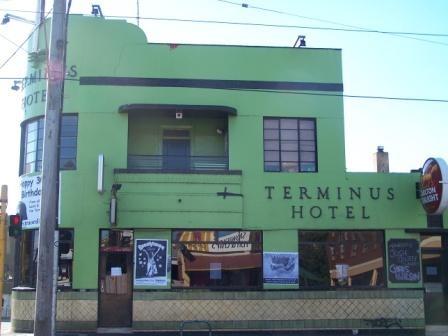 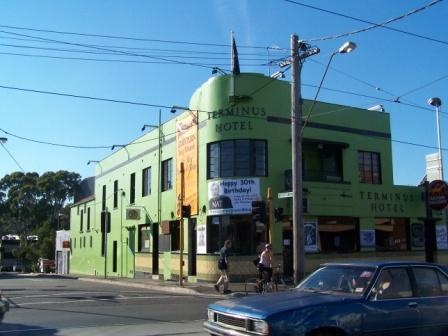 This building is not shown on Clement Hodgkinson's Plan of Simpson's Road of January 1853. In 1858 the Clement Hodgkinson map of Collingwood and East Melbourne showed the Brickmakers Arms hotel situated one block to the east of the present building.

By 1864, this brick hotel was owned by Joseph Shedy, and operated by lens Schmidth, the licensee who became owner in 1865. By 1867 Robert Dehnert, a prominent brick maker in the locality and land owner who later bought out Augustus Fritsch's brickyards immediately to the east of this building, had erected the present Brickmakers Arms on the Flockhart Street corner.

By 1869, Williams Dehnert was licensee, and by 1881 Henry Bossen had purchased the property. However, by 1890, Robert Dehnert was again owner and licensee. In 1923 the hotel's name was changed to The Terminus, and the building was later remodelled in the Moderne style.

Dehnert's house, on the north-west corner of Victoria and Flockhart Streets was demolished in 1988.

The former Brickmakers Arms Hotel is a double-storey building occupying the corner of Victoria and Flockhart Streets. The hotel is rendered and has a curved corner, and a flagpole is fixed to the curved and stepped parapet above. Windows are multi-paned steel-framed casements with horizontal glazing bars, except for those to the side elevation to Flockhart Street which are the original double-hung sashes. The dado of the ground floor is tiled with distinctive horizontal bands of cream, green and black tiles set in a diaper pattern. A recessed loggia on the first floor facing Victoria Street has a curved projecting balcony and a curved concrete hood. The parapet on the corner, and the first floor facade to Victoria Street, bear the present name of the hotel in raised letters.

The former Brickmakers Arms Hotel is of local architectural and historical significance. Although the original 19th century building has been altered, it is a rare surviving building associated with the brick making industry in Abbotsford, which once occupied all the land along both sides of Flockhart Street, but which had relocated to the eastern and northern suburbs by the 1880s. A hotel has occupied this site continuously since 1866. The present building displays typical features of the Moderne style such as steel-framed windows, curved corner, and horizontal facade treatment, notable for its tiling. The building is substantially intact to the extent of the inter-War refurbishment, and being prominently sited at the eastern end of Victoria Street it is a local landmark.