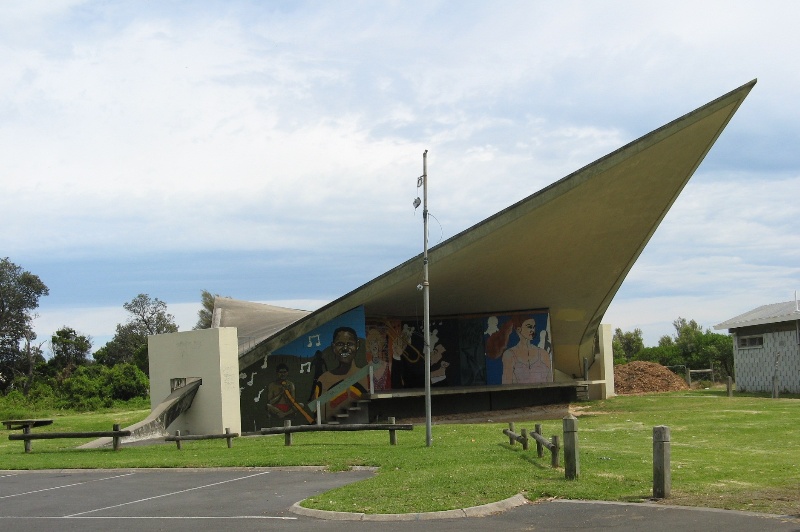 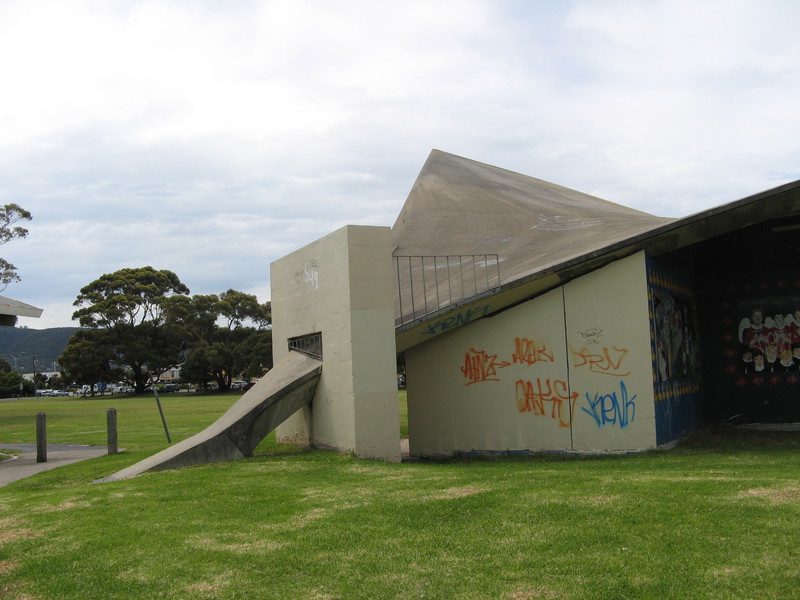 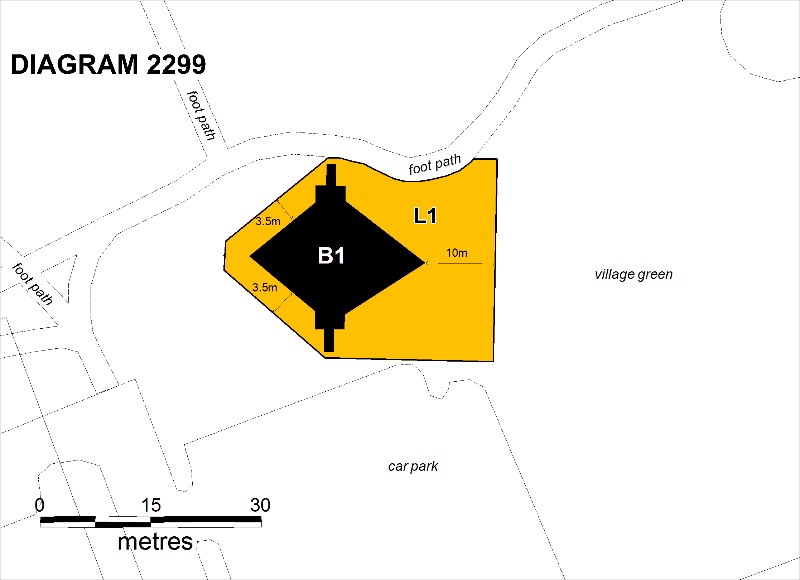 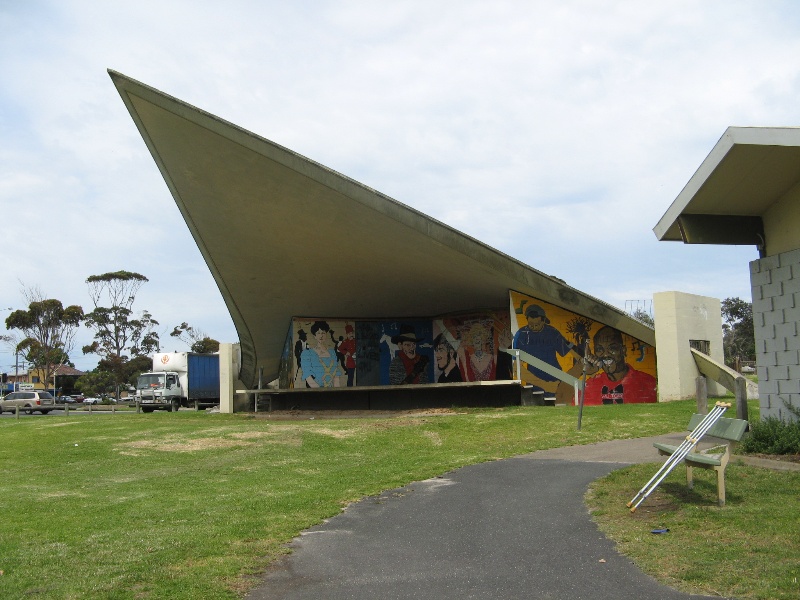 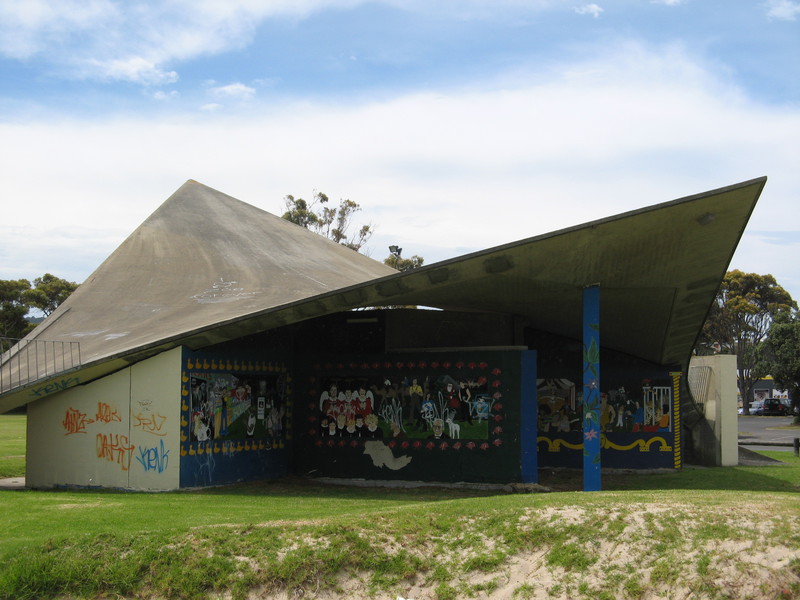 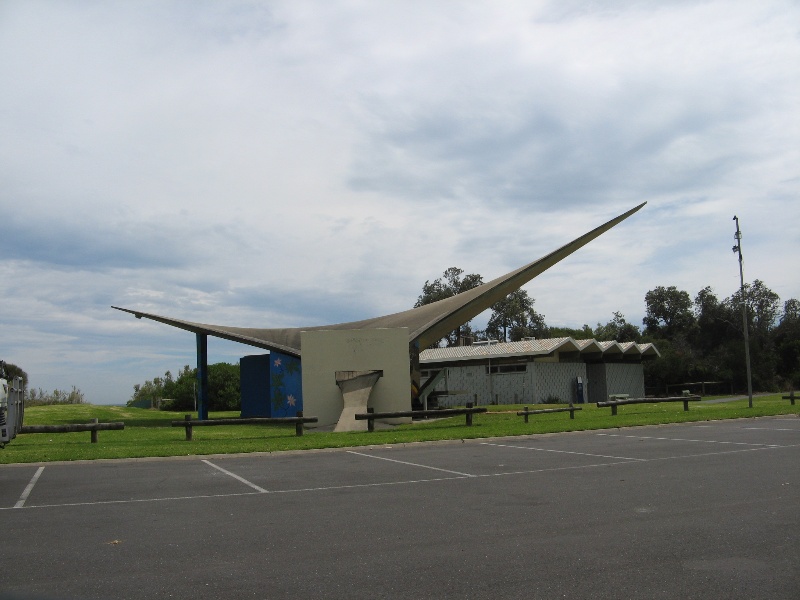 The Rosebud Sound Shell, located on the Rosebud foreshore, is a reinforced concrete structure with a self-supporting hyperbolic paraboloid-shaped roof sheltering a stage and amenity rooms.

The Sound Shell was commissioned in 1967 by the Rosebud Foreshore Committee from the local architect Ronald Murcott and was completed in 1969. Rosebud had become a popular holiday camp site and recreation area, and the sound shell was part of a series of improvements made along the foreshore in the 1960s. Murcott had an interest in the unusual roof forms popular in the post-war period and their potential to span large spaces. He had already designed a church and a car park with roofs in the form of a hyperbolic paraboloid (or hypar), a special form of double-curved shell, the geometry of which is generated by straight lines, which makes it fairly easy to construct. He used the same form for the sound shell, in this case of reinforced concrete construction. Murcott was assisted in the design by the engineer Dr John Brotchie of the CSIRO Division of Building Research, an expert in the analysis of concrete shell structures, and J L van der Molen, a local pioneer in the application of computer technology to the design of concrete structures. The builder was Trevor J Luck.

The Rosebud Sound Shell has a free-standing reinforced concrete shell in the form of a hyperbolic paraboloid above a stage on one side and several enclosed rooms (formerly toilets and storage facilities) at the rear. The roof plan is roughly a diamond-shape, measuring 23 metres by 21 metres. The thickness of the shell varies from 762 mm along the central axis to 508 mm where the lower corners touch the ground. On the stage side the roof rises to a height of 8.8 metres and is slightly lower, 4.9 metres at the rear. The walls below the roof are of concrete block construction. These have now been painted with murals. Since the structure was completed barriers have been added at the lower corners to prevent access to the roof.

The Rosebud Sound Shell is of architectural, aesthetic and scientific (technical) significance to the State of Victoria.

The Rosebud Sound Shell is of architectural significance as an outstanding example of the dynamic architectural forms which became popular in the post-World War II period. It is significant as a rare example of a hyperbolic paraboloid form, a much publicised motif in international architecture from the early 1950s to the late 1960s, and the only known example in Victoria executed in reinforced concrete. It is an innovative example of a sound shell, a building type which in the 1950s and 1960s replaced the bandstand, which had been popular in the nineteenth and early twentieth centuries for performances in public parks.

The Rosebud Sound Shell is of aesthetic significance for its highly unusual expressionist form, which is an example of the dynamic roof shapes derived from structural concepts which were developed in the post-war period. This free-standing sculptural example is a prominent foreshore landmark.

The Rosebud Sound Shell is of scientific (technical) significance as a rare example of a structure with a hyperbolic paraboloid shape, a curved surface generated by straight lines. It is significant as one of the first concrete structures in Australia to have been designed with the aid of a computer program for structural analysis, which has since become the norm.