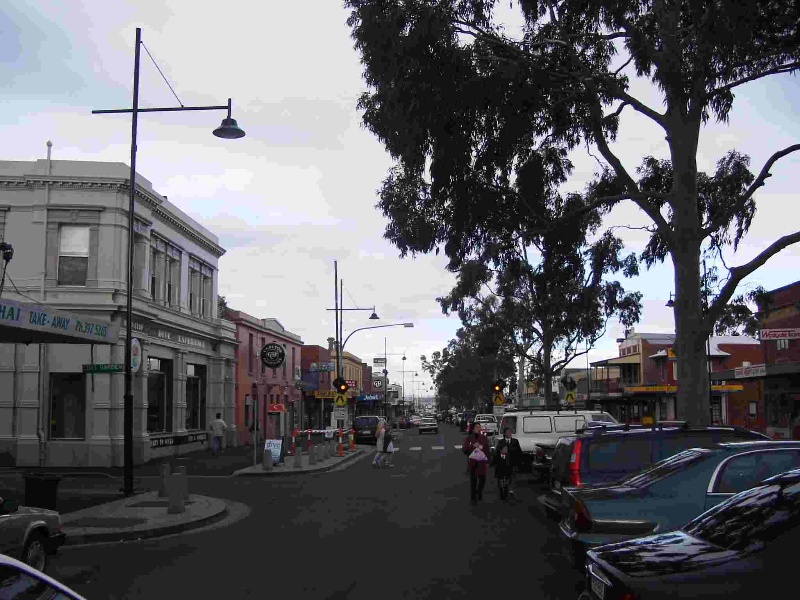 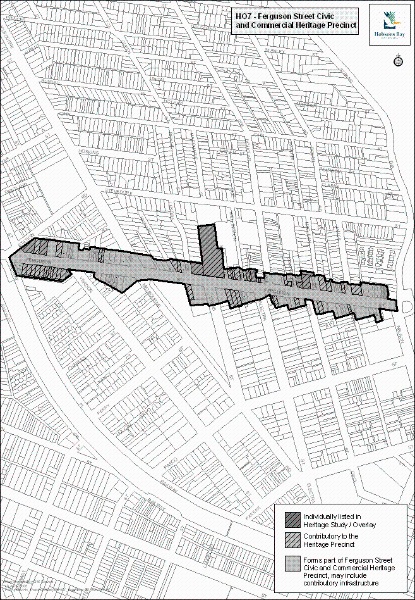 The Ferguson Street Civic and Commercial Heritage Precinct, which comprises all land in HO7 and generally includes properties with frontage or side boundary to Ferguson Street, Williamstown.

The Ferguson Street Civic and Commercial Heritage Precinct is of local historic, social and aesthetic significance to the City of Hobsons Bay.

Historically, Ferguson Street formed the northern boundary of Williamstown as originally surveyed by Hoddle in 1837 and is significant for its ability to illustrate key phases in its development as a city from the mid-nineteenth to the mid-twentieth century. This is demonstrated by:

- The presence of some of the earliest surviving commercial buildings such as the Rose of Australia Hotel (c1860), which is related to the early development of Williamstown when it was the main port of Melbourne.

- The historical associations of individual buildings such as Punshon's Federal Stores and the former "Bracklyn" with prominent citizens in nineteenth century Williamstown.

- The houses interspersed with commercial buildings from the late nineteenth to mid-twentieth century, which illustrate the transition of Ferguson Street from a residential area to the principal commercial centre of Williamstown, replacing Nelson Place whose fortunes declined along with those of the port during the same period.

- The confirmation of Ferguson Street as the civic and commercial heart of the city by the construction of the City of Williamstown Municipal Offices and Town Hall complex between 1919 and 1927, which was the first purpose-built complex constructed by this municipality.

- The small commercial centre at the western end of the street, which demonstrates how self-contained centres were developed in proximity to railway stations in the era before car based transport.

Aesthetically, Ferguson Street contains many individually significant buildings as well as groups of buildings, which date from the key periods of development during the late nineteenth and early to mid twentieth century. These include:

- Individually significant and landmark commercial buildings such as the former Melbourne Savings Bank, the Rose of Australia Hotel and the City of Williamstown Town Hall and Municipal offices.

- The Victorian, Edwardian and inter-war shops, which are related in terms of their siting, scale and form and provide a sense of cohesion and unity to the street. Some retain original or early detailing such as shop fronts and awnings.

- The cohesive group of predominantly Victorian era residences to the west of Verdon Street.

Please note that some heritage places within this precinct may also have an individual citation in this Study. There is a separate citation 'Ferguson Street Maritime Residential' for the houses at 1, 2 and 4 Ferguson Street and the Verdon Street Heritage Precinct for the properties at Nos 154-160 Ferguson Street Williamstown.