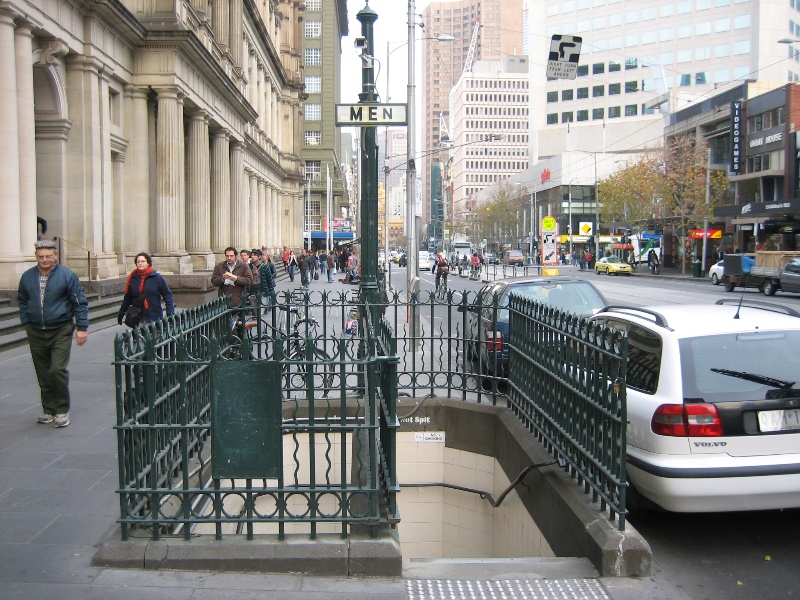 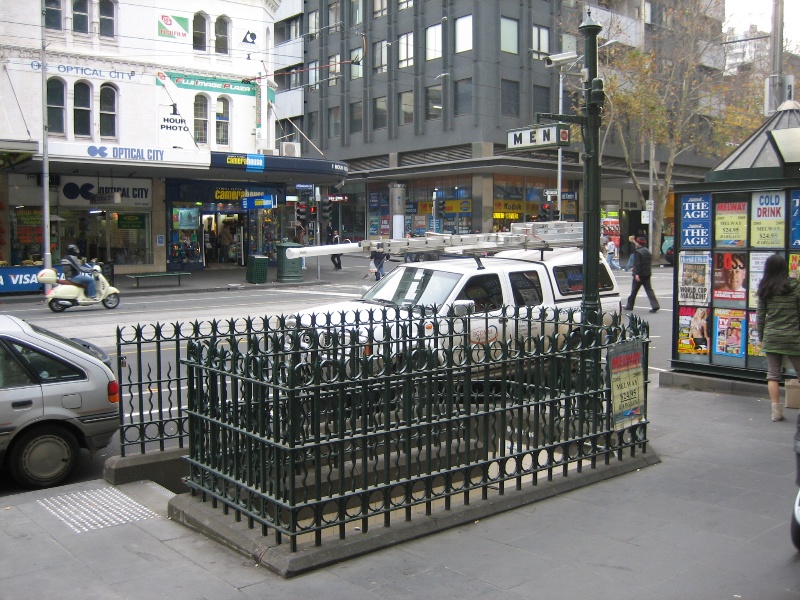 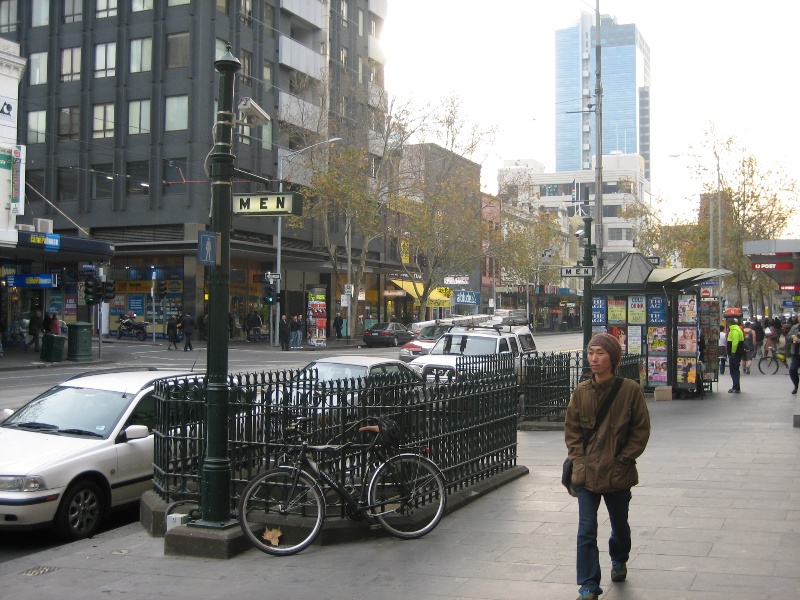 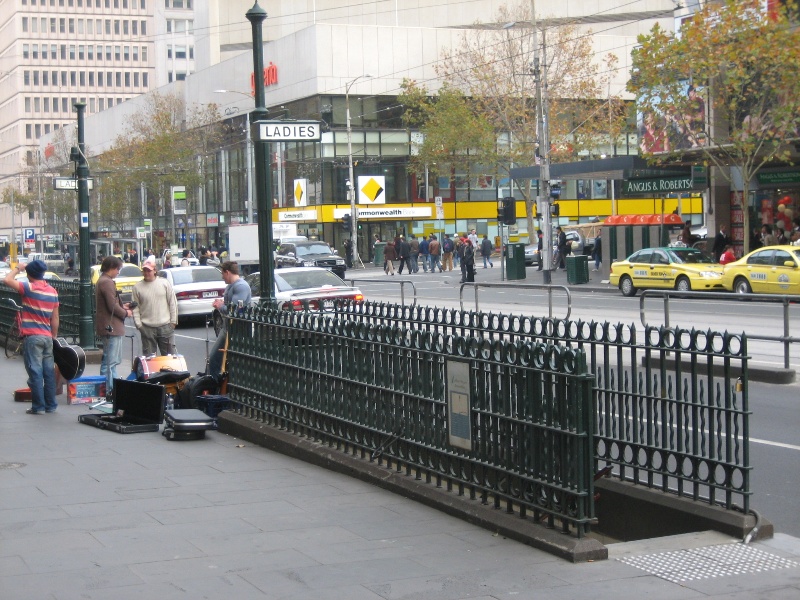 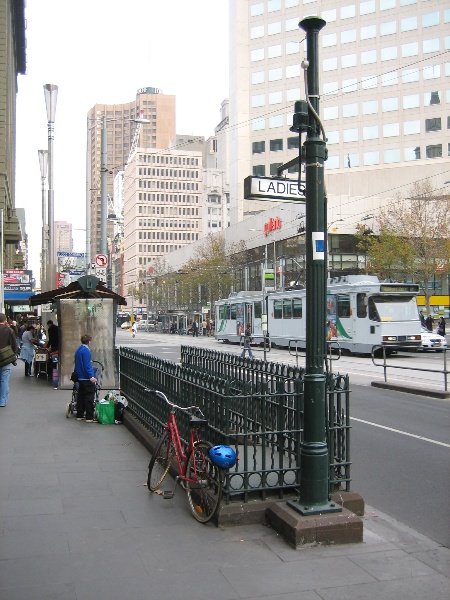 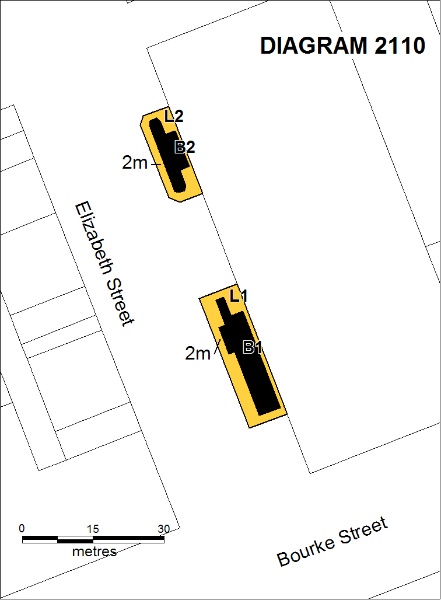 The underground public toilets in Elizabeth Street outside the former Melbourne GPO, the men's built in 1910 and the women's in c 1927, are part of a group built in Melbourne in the early twentieth century in response to increasing public demand for toilet facilities in the city that were both sanitary and discreet. The first public toilet in Melbourne, a urinal for men only, had been built in 1859, but these street level toilets were regarded as indecently public, and without an underground sewerage system, the waste discharged into the gutters. Underground toilets were removed from public view and so better satisfied contemporary perceptions of decency. Following the establishment in December 1890 of the Melbourne & Metropolitan Board of Works, responsible for building and maintaining an underground sewerage system, and with the precedent of similar facilities already built in Scotland, England and Sydney, the first underground public toilet in Melbourne was opened in Russell Street in 1902. It included facilities for women as well as men. This was followed by one for men only in Queen Street in 1905, a men's and women's in Elizabeth Street opposite the Victoria Market in 1907, a men's in Swanston Street in 1909, and the men's outside the GPO in 1910. The women's was not added here until seventeen years later, reflecting the lesser importance attached to such facilities for women in the city at the time. At least six other underground toilets were built by 1939 in prominent positions in and around the city. The facilities outside the GPO are still in use.

The underground public toilets in Elizabeth Street are of a similar type to the others built in the city during the first decades of the twentieth century. Above ground elements consist of separate entry and exit stairs each for the men's and women's, surrounded by wrought iron railings and gates, with bluestone kerbing and cast iron sign posts (possibly modified). Below ground the female toilet measures 13.8m long and 3.45m wide and has eleven cubicles, eight basins and eight stools and a long mirror. The male toilet measures 4.8m long and 3.45m wide and has four cubicles, two basins and one urinal. The interiors have been continually updated since they were built and no original internal fittings survive.

The underground public toilet in Elizabeth Street near the GPO is of historical and architectural significance to the state of Victoria.

The underground public toilet in Elizabeth Street is of historical significance as one of the oldest surviving public toilets in the state, reflecting an important era of sanitary, technological and social reform in the early twentieth century. It is of historical significance as a reflection of an era of public health reform and of municipal responsibility for the provision of such public facilities, and of changing attitudes to public decency, in the early twentieth century. It is associated with a major engineering achievement, the development of Melbourne's underground drainage and sewerage system, and the advances in sanitation and public health made possible, following the establishment of the Melbourne Metropolitan Board of Works in1891.

The underground toilet in Elizabeth Street is of architectural significance as an early example of an unusual building type, and of early twentieth century civic design. Although the interiors have been altered the remaining railings, gates and cast iron columns are of interest as examples of street furniture of the period.