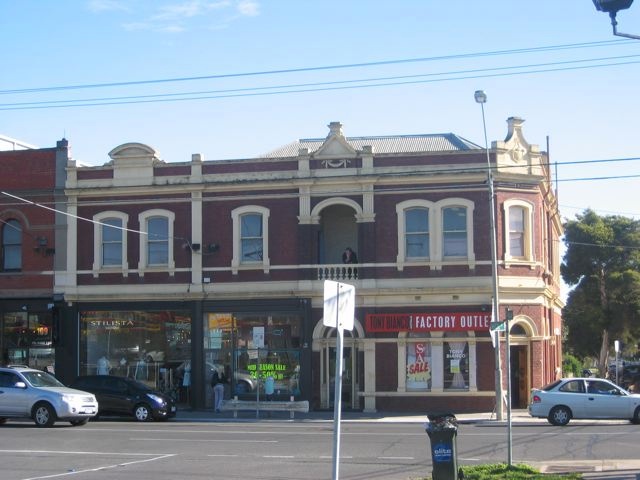 What is significant?
The former Prince Alfred Hotel, constructed c.1864 and re-built in 1890 to a design by the architects Upton & McKay, at 111-13 High Street Preston is significant. The building was probably built in two stages incorporating an earlier single-storey hotel/building on this site, as the ground floor bricks are a different bond and type to those of the upper level. The hotel building included a shop at the south end facing High Street, but all of the ground floor of the building is occupied by shops now. The two shops at the south end on High Street have shopfronts of recent origin. The corner portion of the ground floor and the upper level retain their original facades, which are designed in a Free Classical-style. The facade facing High Street has a recessed balcony, an element that was popular on hotel building throughout Melbourne around the end of the nineteenth century.

What was probably the former entrance to the residential quarters on the upper level survives on the High Street elevation and inside of this doorway is a timber stair with moulded timber balusters of early origin, which leads to the upper level. The corner entrance of what was probably the former main bar of the hotel survives and is the entrance to a shop. A relatively plain parapet, with pediments above the entrance, the original shop at the south end and the corner, conceals the building's hipped roof that is clad in corrugated galvanised steel sheeting.

Later alterations and additions including the shopfronts of recent origin are not significant.

How is it significant?
The former Prince Alfred Hotel at 111-113 High Street, Preston is of local historic and architectural significance to Darebin City.

Why is it significant?
Historically the former Prince Alfred Hotel and shop is significant as a representative example of a typical Victorian-era commercial building that is associated with the development of the first commercial centre in Preston in the mid to late nineteenth century and that may contain remnants of the original building constructed c.1864. The significance of the building is enhanced by its rarity value as one of the few nineteenth century commercial buildings in Preston. The de-licensing of the hotel in the 1920s illustrates the strength of the temperance movement, which had particular connections to Preston because of the strength of the Methodist church in the community. (AHC criteria A.4, B.2, D.2)

The hotel and adjoining shop is architecturally significant as a representative example of a medium sized hotel and commercial building in the Free Classical style by the architectural firm of Upton & McKay. Although the use has ceased the original function can still be interpreted through the architecture, which includes rare surviving internal features such as the staircase (AHC criterion D.2)