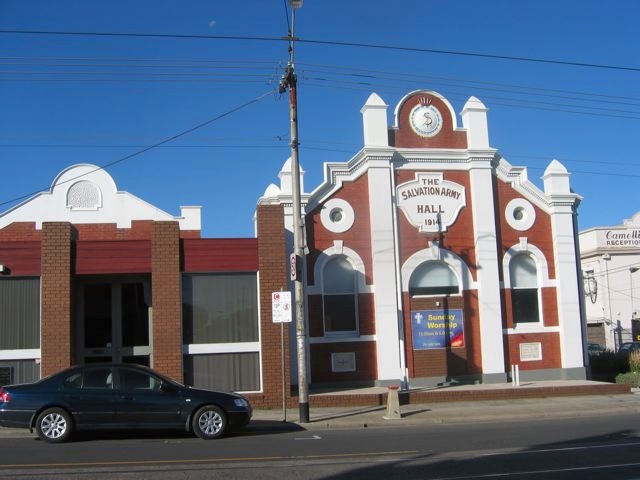 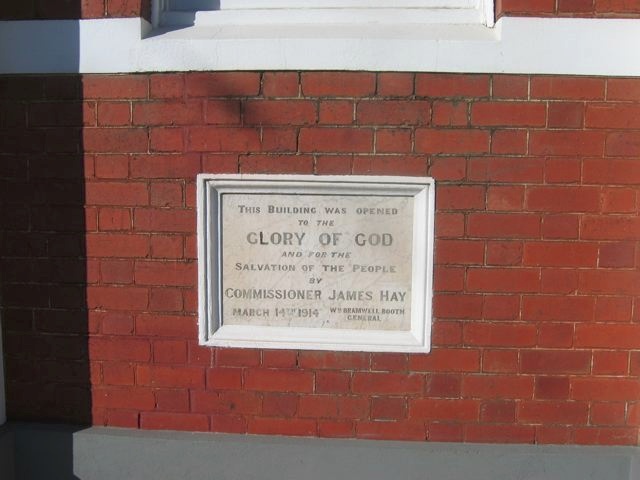 What is significant?
The Thornbury Salvation Army Corps complex at 710 High Street (corner of Gooch Street) comprises the brick Citadel constructed in 1914, the adjacent brick Sunday School constructed a few years later, and a gabled weatherboard hall at the rear. The Citadel is set back a short distance from the High Street boundary, and it is designed in a Free Classical-style. The west (High Street) elevation is divided into three bays by pilasters. Towards the top of the central bay is a Salvation Army insignia with a crown and the words Blood and Fire. The bays that flank the central bay have arched windows, also with a vermiculated moulding. There is a marble stone below each of these windows. Below the insignia in the central bay is a pressed cement shield with the words The Salvation Army Hall 1914. Below this shield is the Citadel's former entrance, which has an arch with a vermiculated moulding around its intrados. The lower part of the arch has been unsympathetically bricked up with brown coloured bricks. The upper parapet of the Sunday School remains intact and can still be seen from High Street.

The Modernist alterations to the front of the Citadel, the Modernist building to the north of the Salvation Army Hall and other post-World War Two alterations and/or additions are not significant

How is it significant?
The Thornbury Salvation Army Corps complex at 710 High Street, Thornbury is of local historic, architectural and social significance to Darebin City.

Why is it significant?
Historically, the complex provides evidence of the importance of the Salvation Army as a community organisation in the twentieth century and illustrates an important period of expansion of the Army in Melbourne during the early twentieth century. This complex is significant as it provided the base for the establishment of the Army's activities in Thornbury and enabled its expansion into surrounding areas. It is also significant as an illustration of the suburban development of Thornbury in the early twentieth century. (AHC criteria A.4, D.2)

The Salvation Army Hall at 710 High Street, Thornbury is architecturally significant as a relatively intact example of a suburban temple designed in a Free-Classical-style, a style relatively uncommon in metropolitan Melbourne, where Gothic Revival was typically the preferred style for churches up to the mid-twentieth century. The use of the Free Classical style reflects the independent philosophy of smaller denominations such as the Salvation Army, which saw itself as 'not a church'. It is a good representative example of the complexes constructed by the Army in prominent 'high street' locations during the early twentieth century. (AHC criterion D.2)

Socially, it is significant as a church complex that is known, used and valued by the people of Darebin. The evangelistic and social welfare work of the Army was of great importance, particularly to working class people, in the twentieth century. (AHC criterion G.1)