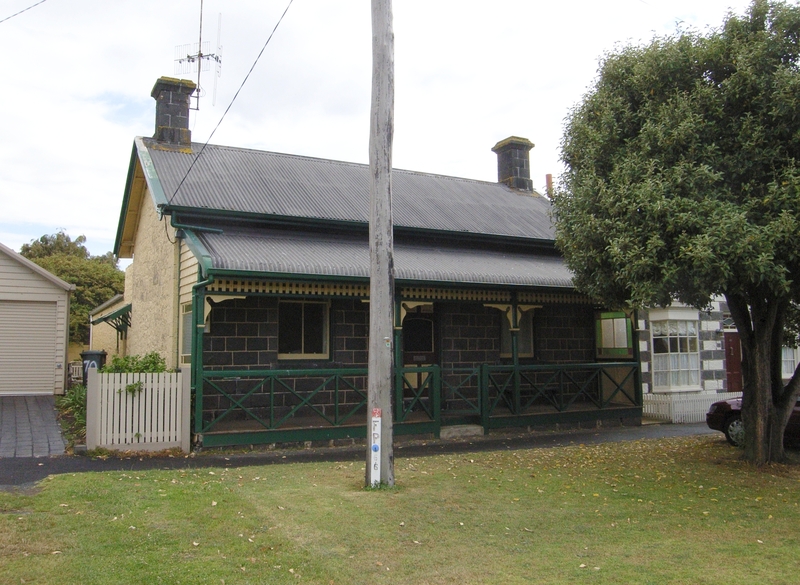 What is significant?
Graceton is located on the southern side of the street grid of Port Fairy and faces the dunes of the South Beach. The earliest section, towards the rear along the west boundary of the block, is built in part of nogged timber framing with limestone rubble infill. It now forms the kitchen, pantry and a small bedroom of this single storey cottage of four principle rooms. Samuel Cock, stonemason, may have built this section soon after his emigration in 1854. By 1858 he had purchased the land and, in 1870, re-mortgaged it for a considerable sum, which suggests that, by about 1858, he had constructed the front bluestone wing. It has a notable semicircular fanlight with coloured glass and surviving four-paned double hung sash windows. The detached privy in the north-west corner of the site probably dates from the same time. William Powling purchased the cottage in 1879 and sold it to Margaret Denny in 1887 (with the conveyance not effected until 1939). The bull-nose timber verandah was added in 1913 when the front door was also changed. The Denny family, local fishermen, occupied the house from 1887 to1963. A modern detached bathroom dates from the 1960s. From the 1970s, Graceton has been used as a holiday cottage. The cottage retains a high degree of integrity from the late nineteenth and early twentieth century periods, but has no original decoration, and is in good condition.

How is it significant?
The cottage, Graceton, at 68 Campbell Street, Port Fairy is of architectural and historic important to the State of Victoria.

Why is it significant?
Architecturally, the cottage demonstrates a range from humble vernacular construction techniques, specifically nogging, to the more formal details of arches, niches, elaborate plasterwork and the late Georgian fanlight. Historically, as part of a group of similar cottages (and one of several surviving within Port Fairy) Graceton reinforces the modest seafaring character of a pioneering town of national significance.
[Online Data Upgrade Project 2001]