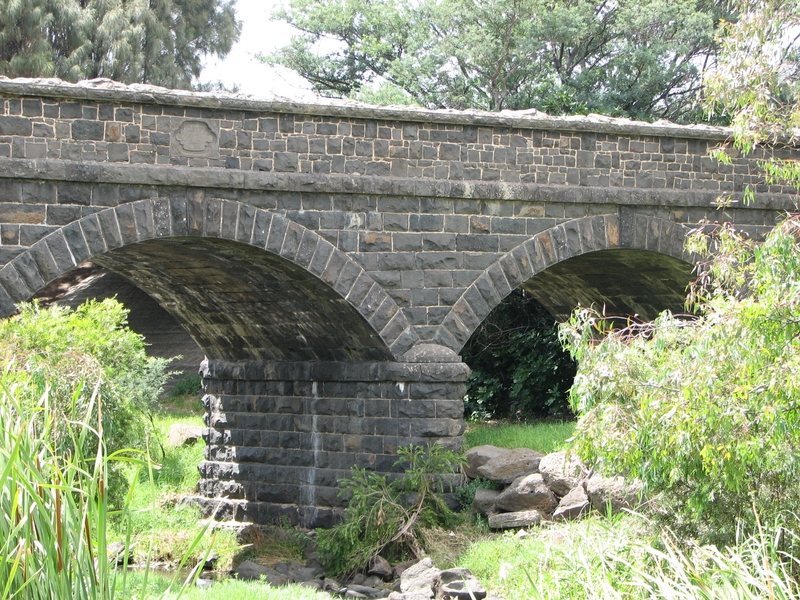 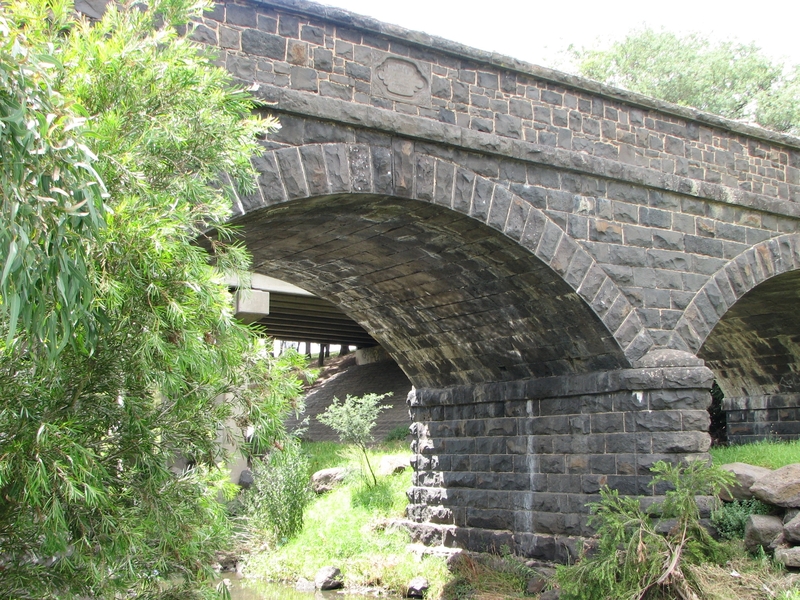 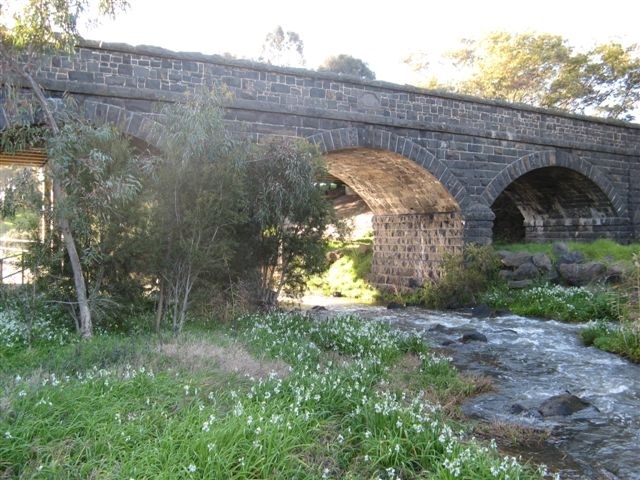 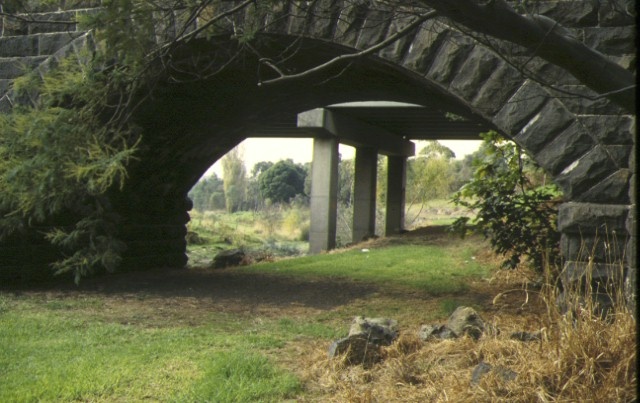 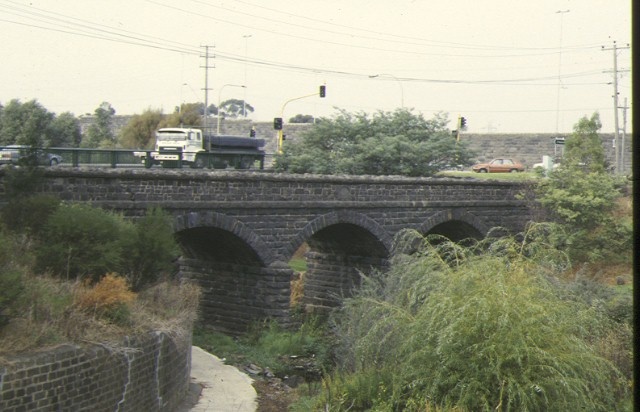 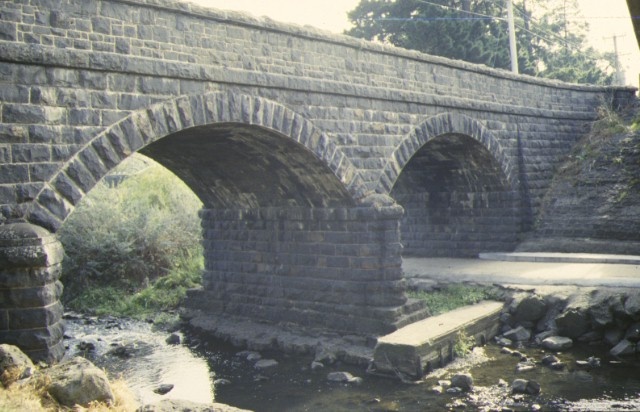 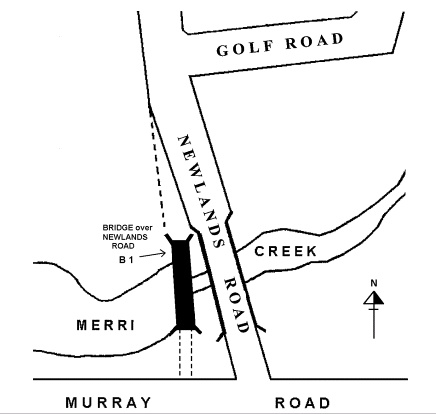 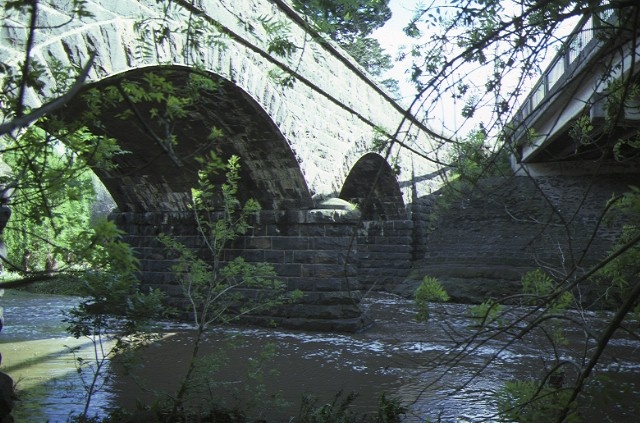 The Bridge, over Merri Creek was constructed in 1865 by convict labour from nearby Pentridge Prison. It was built under the administration of William Champ, the third inspector General of Penal Establishments in Victoria who had earlier been the first Premier of Tasmania. During his time as Inspector General he was responsible for the building of much of present day Pentridge Prison, transforming it from a makeshift stockade to the central penitentiary for Victoria. His name is inscribed on a foundation stone of the bridge. The bluestone for the bridge was quarried from within the Old Penal Reserve along the Merri Creek. Newlands Road Bridge was originally built as a road bridge and was open to traffic up until 1961 when a new concrete bridge was opened along side it. Newlands Road Bridge is a triple span bluestone segmental arched bridge with integral balustrades and parapets. Each span is 9.1 metres and the bridge is in total 27.4 metres long. It is currently used as a pedestrian bridge across the Merri Creek. The bridge runs in a north-south direction and follows the course of an old section of Newlands Road.

The Bridge, over Merri Creek is of historical, social and architectural importance to the State of Victoria.

The Bridge, over Merri Creek is historically and socially important for its close connection with Pentridge Prison, as one of only a few examples existing of public works constructed by penal labour. The bridge is an important indication of penal reform in Victoria, being built when there was a new belief that prisoners should work to reform themselves. The bridge is historically and socially important for its associations with Inspector General William Champ, first Premier of Tasmania, noted prison reformer in nineteenth century Victoria, and the man responsible for much of the existing buildings, walls and gates of modern Pentridge Prison.

The Bridge, over Merri Creek is architecturally important as an early example of a substantial bluestone bridge. It demonstrates skilled stonemasonry in its construction with prominent voussoirs to the arches, substantial piers with carved breakwaters, rusticated bluestone string course at road level, and capping stones to the parapet walls. The bridge is important for its contribution to the complex of visually linked prison related structures, which include the Murray Road Bridge and the Pentridge Prison walls.