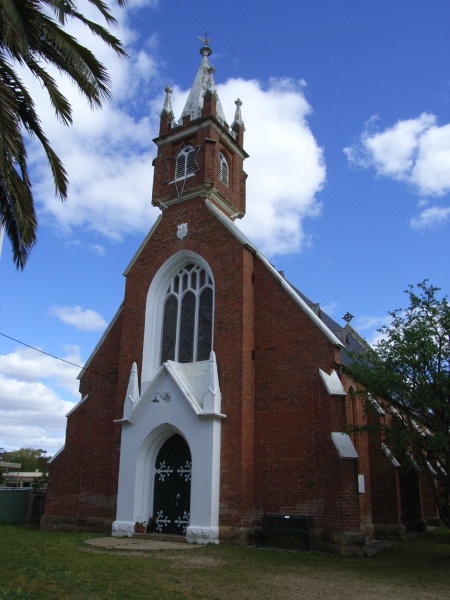 St John's Anglican Church of 1868, the former Christ Church of 1854, now known as Budd Hall, and the two palm trees at the front of the church are significant. The later additions to Budd Hall constructed in brick in 1972, and the vicarage are not significant.

St John's Anglican Church complex is of local historical, aesthetic and social significance to the City of Greater Bendigo.

St John's Anglican church demonstrates a long and continuous occupation of the site originally reserved for the Anglican Church, the only one of the denominations in Heathcote to do so.

The earlier building of 1854, formerly known as Christ Church is historically significant as one of few remaining churches from the era of initial gold discovery and mining in the Heathcote district. Its later name change to Budd Hall in 1894 demonstrates an association with the long serving incumbent Rev. Theodore Budd.

St John's Anglican Church of 1868 has historical associations with prominent Melbourne Anglicans Bishop Dr. Perry at the dedication and opening of the church in 1869, and Archbishop Frank Woods at the celebration of the church's centenary in 1969. Criterion H

St John's is one of a large body of churches and other major buildings designed by the prominent German Bendigo architects Vahland and Getzchmann. It is one of three known churches designed by the practice with a central tower or bellcote, a feature derived from the architectural tradition of many German churches. St Johns demonstrates aesthetic significance in the composition of the front elevation evidenced by the brick articulation, porch detailing, recessed window, and highly unusual bellcote that appears to hover over the church. The palm trees contribute to the setting of the church and hall. The interior is significant for its memorial stained glass windows, furniture and fixtures in timber, and the unglazed terra cotta floor tiles. Criterion E

Although altered by the addition of a brick front, Budd Hall demonstrates a vernacular approach to church buildings that was soon replaced by the Gothic Revival style that was adopted as almost universally appropriate to church buildings. Aspects of the vernacular style remain in the leaded glass windows and the remaining stone walls as well as the one room form of the building. Criterion D

St John's Anglican Church and Budd Hall are of social significance for the Heathcote community as a place of continuous worship for over 150 years. Criterion G