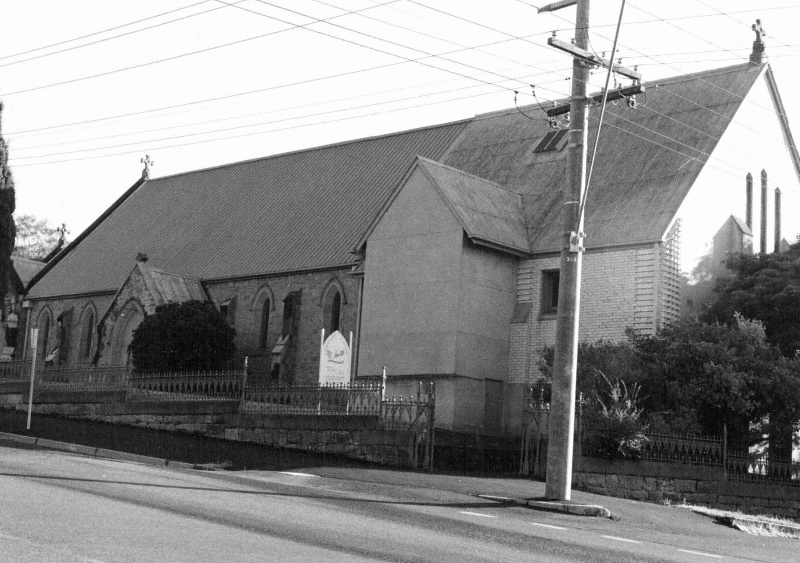 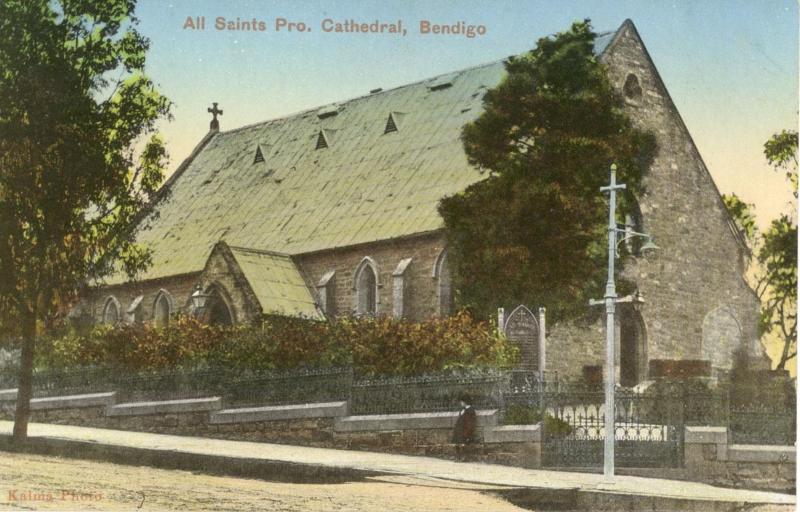 All Saints' Church (formerly All Saints' Cathedral), located on the corner of Mackenzie and Forest Streets in Bendigo, is part of a wider area of related buildings which together form a religious and secular precinct of outstanding aesthetic value. It is situated on high ground immediately above the site of the first Government Camp on the Bendigo goldfield and is in close proximity to a number of buildings of acknowledged cultural value. The location of the church is associated with the beginnings of Christian worship on the Bendigo Goldfields. Anglican ministry was initially provided in early 1852 by the Revd. John Herbert Gregory as part of the recently commenced Goldfields Mission of the Church of England. He delivered his sermons from the rear of a horse drawn wagon on All Saints' Hill. This was later replaced by a tent, then a canvas roofed, slab walled church, followed by a stone church in 1856. The Revd. John Gregory named his tent church 'All Saints' and the site then became known as All Saints' Hill. It served other public functions, particularly as a place of meeting, and accommodated the mass gatherings of miners objecting to licence fees in 1853 that led to the Red Ribbon Rebellion movement.

The Church of England school, completed on the site in 1855 (prior to completion of the church), was the location of the first Lutheran service held on the Bendigo Goldfields.

The original stone church, designed by W Burgoyne and built in 1856 by Simeon Bros suffered major storm damage in January 1858 and was extensively repaired and rebuilt in 1858 under the supervision of the young architect W.C. Vahland to the original plan. A new brick chancel was added to the western end in 1860 and replaced in 1871.

The greater part of the 1858 structure, together with the new Chancel at the eastern end added in 1935 and the guild hall at the western end added in 1938, are in situ. The 1935 Chancel was the result of a failed attempt to replace the original church building with a structure compatible with All Saints' promotion from Pro Cathedral to full Cathedral. The new Chancel contained three stained glass windows designed by Christian Waller and made by Napier Waller depicting figures from the Old Testament, the New Testament and contemporary ministry. These windows are now located in the Art Gallery of South Australia. A number of important memorial windows remain in the church including nine lancet windows by Melbourne firm Ferguson and Urie in the Nave, a triangular War Memorial window by Brooks Robinson & Co., unusually a one off design and one of only two in Victoria dedicated to parishioners who served in World War II and Korea, and a large and very fine memorial window by William Montgomery in the 1871 Chancel which includes a portrait of the Revd. John Garlick, to whom the window is dedicated.

All the internal fittings and furnishings in the church with the exception of the organ and a Credence Table have been removed.

The cast iron fence of 1885 designed by W C Vahland, facing both Forest and Mackenzie Streets defines the church enclosure while a brick and wrought iron fence of the early

twentieth century defines the Mackenzie Street boundary of the School and Master's Residence.

The All Saints complex is significant to the City of Greater Bendigo for its aesthetic, cultural, historical and archaeological significance at a Local level while two windows are aesthetically significant at a State Level.

All Saints' church, designed by Fredrick Burgoyne, is aesthetically, culturally and historically significant as the last remaining example of an early (1856/1858) Early English Gothic Rudimentary style church in Bendigo constructed of local Ordovician stone. It includes a later (1871) red brick Chancel with a large geometric tracery window by William Montgomery, containing a portrait of the Revd John Garlick as well as the Archbishop of Canterbury. The Nave contains nine stained glass lancet memorial windows by Ferguson and Urie. A triangular window, one of only two in Victoria which includes a dedication to those who fought in the Korean War, designed by William Kerr- Morgan of Brooks, Robinson & Co is to be found in the entry porch. These windows are of State significance. The cream brick eastern end of the church is the only physical evidence of the aspirations of the congregation as the church progressed from the role of Pro- Cathedral to full Cathedral status but its significance is reduced by the condition of its crypt and foundations, and that it is such a small fragment of the intended structure. The church is also culturally, historically and aesthetically integral to the undocumented but well-defined religious precinct.

Anglicanism was introduced to the Bendigo Goldfields at the site of All Saints' in February 1852, just three months after the official discovery of gold. Either as a Parish Church, Pro Cathedral or Cathedral All Saints' has played an important role in supporting Anglicanism in Bendigo and, at times as the central Church in the Diocese of Bendigo, to the region, to the present day.

All Saints' contributed to the social and cultural development of the City through its support for a number of church related associations such as the All Saints' Women's Guild and Mothers' Union, as well as secular organisations such as the Boy Scouts and Girl Guides who occupied the site. A Chinese Mission, established at All Saints' in the second half of the nineteenth century, ministered to local Chinese Anglicans, as does the Church of True Light today. All Saints' was the parish church for a number of influential citizens who played an important role in the social and cultural development of the city.

Continual occupation of the site dating from the beginnings of the Bendigo goldfields suggests that there is a strong likelihood of substantial archaeology on the site, particularly in and around the location of the original Parsonage. Excavation of this area would assist in our understanding of the site's use over time.