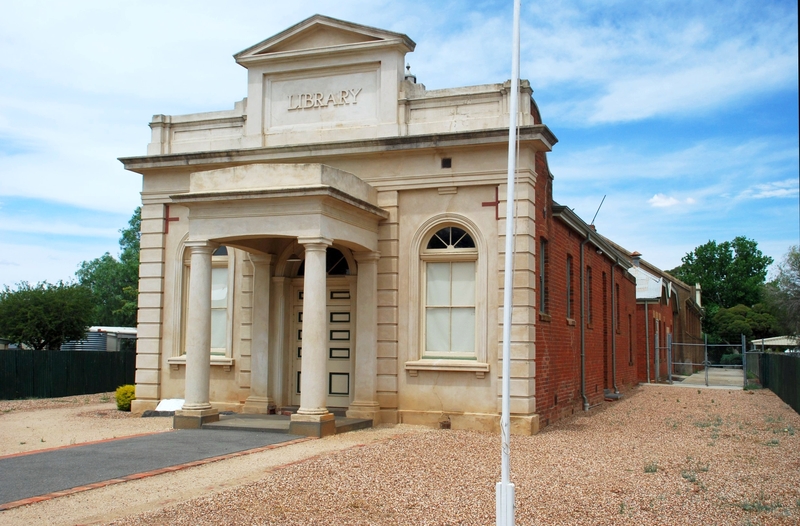 THE ATHENAEUM AND MEMORIAL HALL SOHE 2008 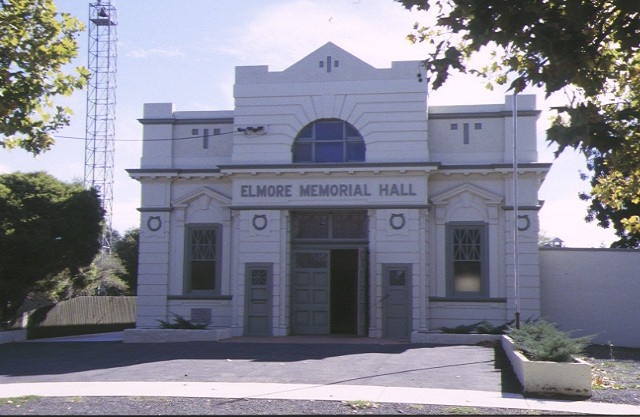 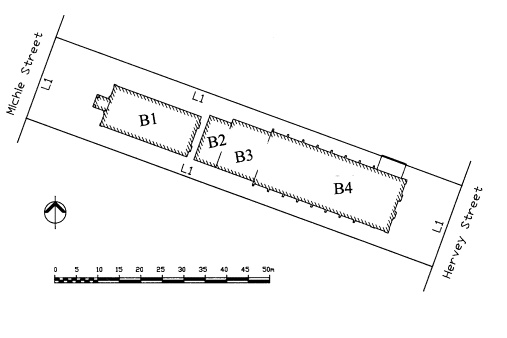 The Elmore Athenaeum and Memorial Hall complex comprises the original 1869 building, the 1885 Athenaeum, the 1912 Supper Room and the 1924 Memorial Hall.

The 1869 building was originally constructed as a school and used as such from 1869 to 1875, after which it was used as a library, then later (and currently) as a kitchen. This brick building retains its original form and its original timber ceiling.

The Athenaeum and Free Library, comprising a public hall with two ante-rooms used as a free library and reading room, was erected in 1885 alongside the 1869 building. It is a single storey brick structure, with the finely executed Michie Street facade of a formal classical composition compressed for small scale work in the Italianate Transition Classical style designed by prominent Bendigo architect WC Vahland. It was built by G Galbraith of Sandhurst. The simple well proportioned three bay rendered facade is simply articulated with rusticated piers, a simple cornice and parapet and pedimented name plates. The centrally located double entrance doorway has an attached Doric porch, flanked by semi-circular windows. The building has a timber trussed roof with corrugated iron roofing and T. & G. timber lining board ceiling. The walls are load bearing cavity masonry comprising modified colonial bond pattern externally and hard plaster internally. The internal floor comprises conventionally carcassed timber flooring.

The adjoining supper room, designed in a sympathetic style to the kitchen, but larger in size, was constructed in 1912. It currently has a false ceiling. A lean-to structure used as a kitchen, (now demolished), was attached to the east side of the 1869 and 1912 buildings.

The architectural style of the 1924 brick Memorial hall with rendered facade has been inspired by the architectural language of the 1885 Athenaeum building. The architect has not been identified; the builder was G Arblaster of Elmore. A cream-brick toilet block has been attached to the south east corner of this hall. The original outside toilets have been demolished.

The Elmore Athenaeum and Memorial Hall Complex is of architectural and historical importance to the State of Victoria.

The complex is architecturally important as a rare, generally intact hall complex with all three public buildings used as halls for the Elmore community still surviving on the one site. The 1885 Athenaeum building is a significant example in the formal Italianate Transition Classical style, compressed for small scale work, by the prominent Bendigo architect WC Vahland.

The complex is historically significant for its associations with important Victorian cultural institutions such as Free Libraries, Athenaeums and Mechanics Institutes, which from the 1860s increasingly played an important social and cultural role in communities. The different stages and development of the Elmore Athenaeum and Memorial hall complex reflect the growth of the town.