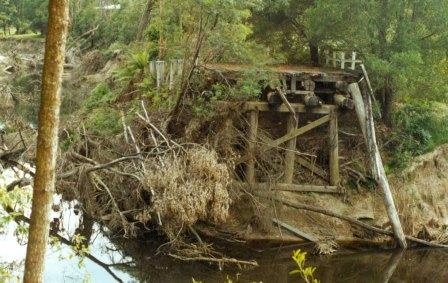 The Cabbage Tree Creek Bridge which dates from 1938 is historically and scientifically significant at State level, as the most intact and substantial surviving example of an innovative design of highway motor bridge which originated on this same Princes Highway in 1930. It was constructed just before World War Two halted bridge construction and created a watershed in Victorian highway-bridge design. It was also the last all-timber bridge to be built on the Princes Highway East. The bridge is of a standard type of longitudinally-timbered motor deck first introduced by the CRB in 1930, with the bituminous surfacing that became normal on timber highway motor bridges. The five-span all- timber simple-beam bridge is approximately 42 metres in length, with six stringers per span, a deck width of six metres, and a height of approximately seven metres. The bridge at Cabbage Tree Creek is a rare and representative artefact illustrating this important phase of Australian transport history. In this bridge type, which became the new standard Victorian timber bridge after 1931, a variation in the then standard cross section was made with timber decking planks being fixed longitudinally instead of transversely. Decking was supported by 9 inches x 6 inches cross-beams spaced at 4 feet intervals along the round-timber stringers, allowing free air flow for greater timber longevity and enabling easy and cheap deck maintenance, and allowing half the bridge to carry traffic while under repair. That design, commonplace though it may appear today, represented a major advance in the technology of building timber-beam bridges for Victorian motor-highway conditions. This innovation was introduced by Victoria's Country Roads Board, and would later be widely used in other states. The bridge is also of aesthetic significance, being situated in pleasant creek-valley bushland a short distance from the modern highway route, and accessible and visible to passing motorists. In contrast with the modern highway crossing, the bushland setting reminds one of the quieter era of rural motoring between the two World Wars.
Classified 'State': 06/10/1997

File Note: Destroyed by flood 1998
Show more
Show less
All information on this page is maintained by National Trust. Click below for their website and contact details.