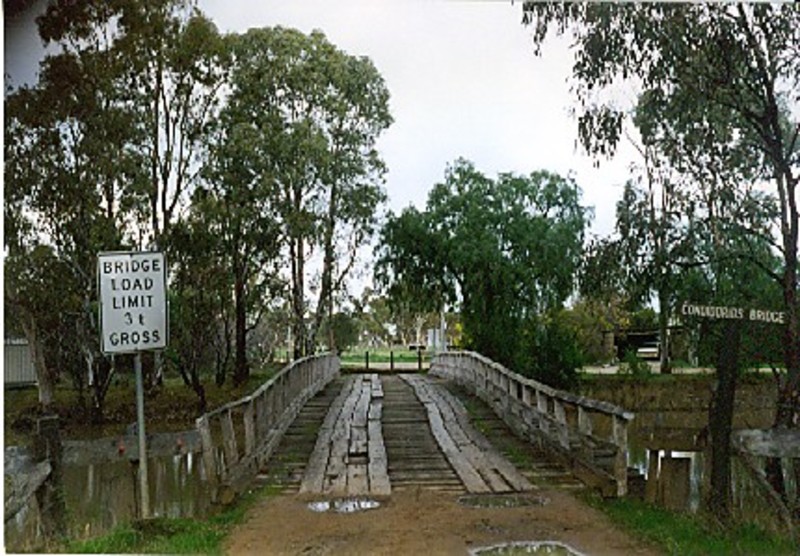 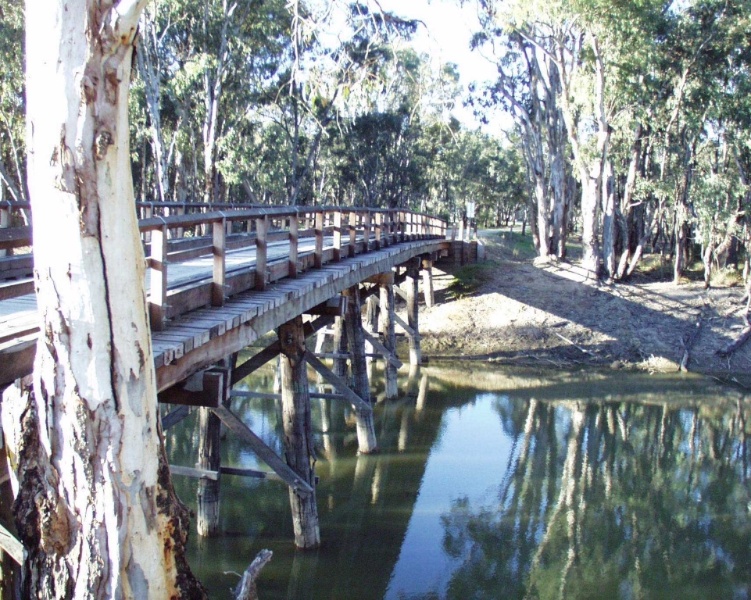 This highly unusual all-timber bridge was constructed over the Gunbower Creek near Koondrook township in 1906, which dating alone gives it considerable historical significance today. As a substantial square-timbered all-timber bridge in a Victorian colonial tradition, Condidorios is in a very select class. Two other of its structural features in combination make it a very rare, and very probably unique structure, among Victoria's surviving timber road bridges. Firstly, along with a fast-dwindling group of old timber road bridges, Condidorios Bridge has been built with square stringers sitting directly on the timber crossheads, without the use of corbels. Even rarer is this bridge's deck design, with pier heights rising towards the middle of the stream to provide a definite hump-backed shape, allowing small watercraft to pass below. With three rare features in combination (squared stringers, no corbels, "humped" deck profile), Condidorio's Bridge stands alone among Victoria's very few surviving turn-of-the-century all-timber road bridges. Its transverse-timber deck with running planks are also rapidly becoming scarce in Victoria. The bridge also has the advantage of being situated in an attractive natural riverland environment. Its interesting humped elevation makes for a fine riverland silhouette in a significant tourist setting. The bridge is currently in use for pedestrian purposes, and could be a strategic part of a proposed local heritage walk. Condidorios has a very definite niche in local history, having long connected the twin towns of Koondrook-Barham with the large and popular riverland flora and fauna reserve of Gunbower Island, and it has carried huge tonnages of Murray River red gum from island saw mills and sleeper-hewers down the decades. This bridge could still have a significant social role to play in carrying light local and tourist traffic to Gunbower Island in a traditional way, if restored for that purpose.
Classified: 20/06/1997