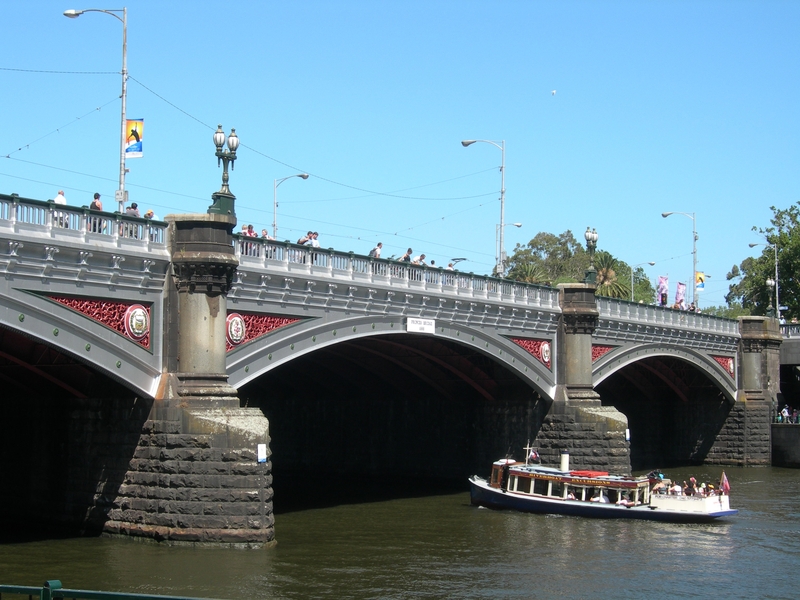 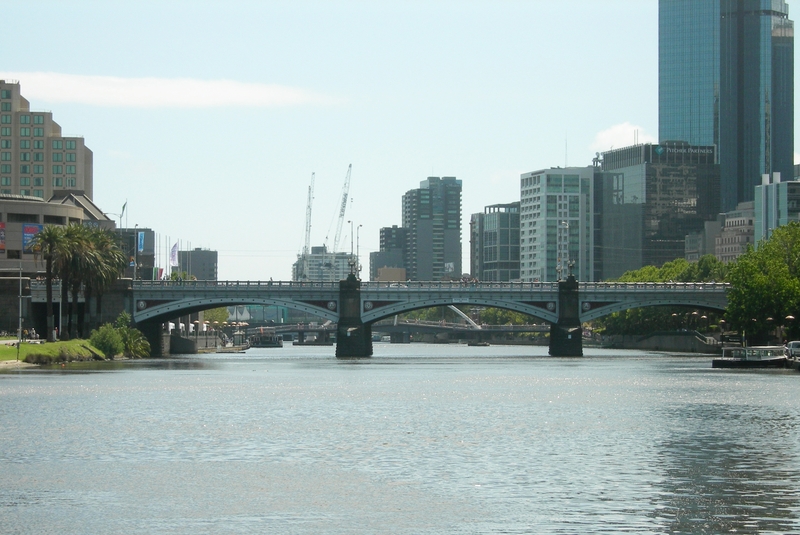 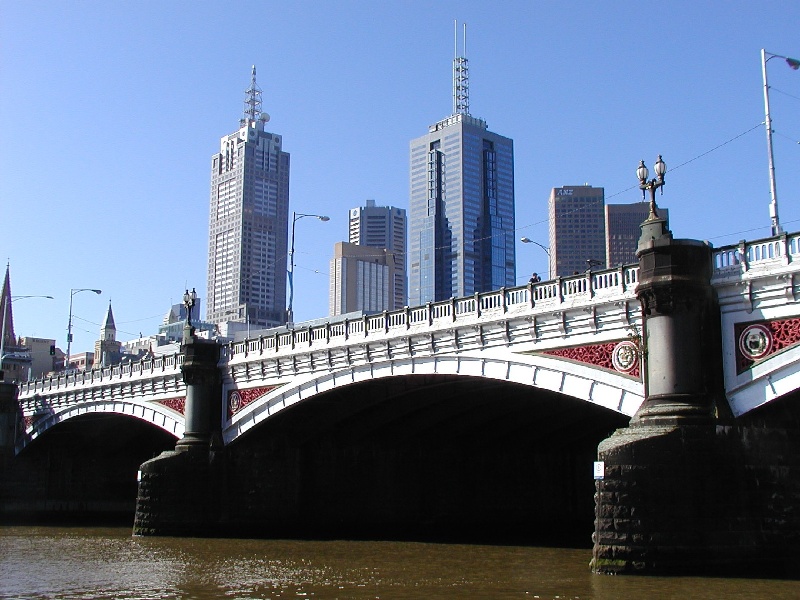 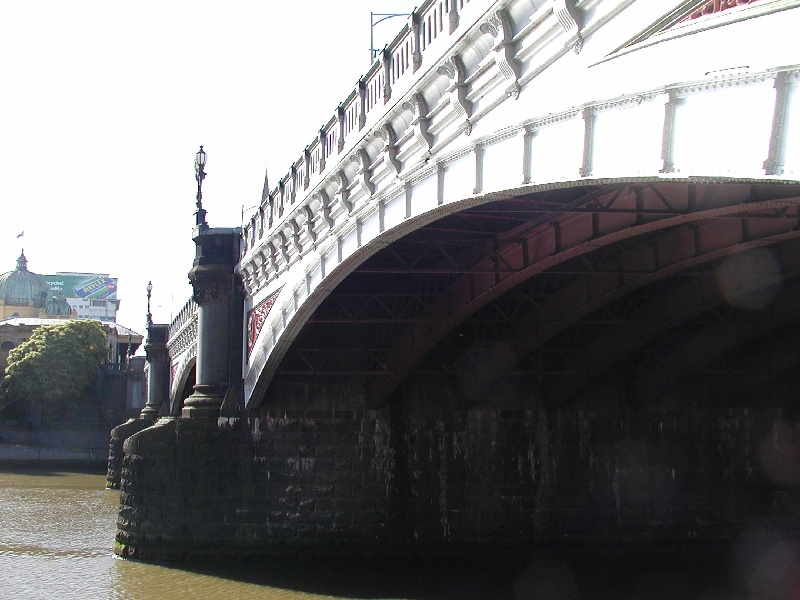 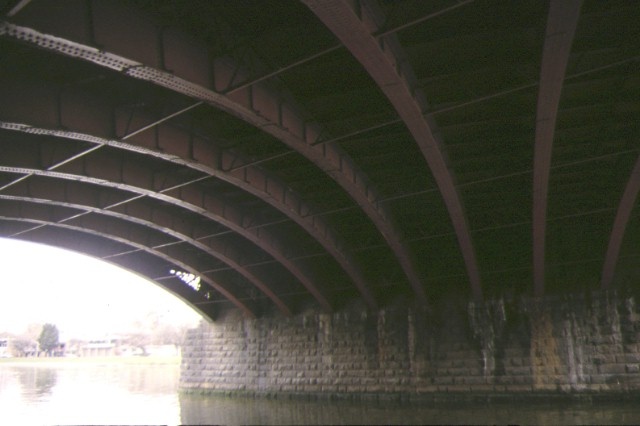 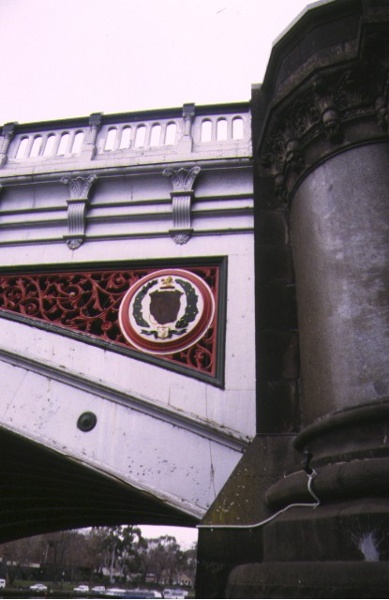 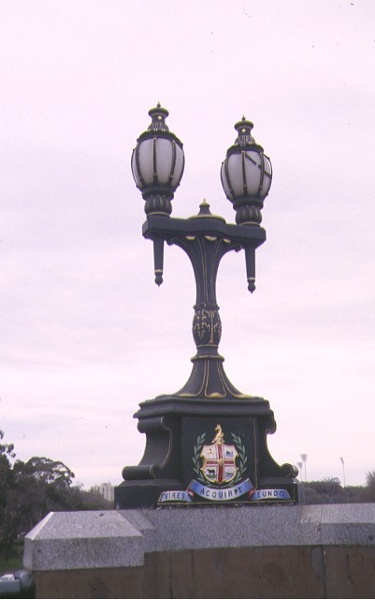 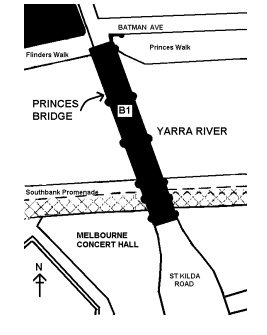 Princes Bridge was designed by Jenkins, D'Ebro and Grainger and constructed in 1886-88 by David Munro. The bridge, completed in 1888, was the third bridge across the Yarra at that location. The first two bridges had been built in 1845 (timber) and 1850 (stone) in response to the need for a permanent river crossing into the city. The earlier bridge was named after the Prince of Wales, later Edward VII, and the name has survived through to the current bridge. Princes Bridge is a three span curved iron plate girder bridge with coursed rock-face bluestone block-work piers, abutments and wing walls. The upper sections of these have dressed granite and sandstone details. The decorated cast iron spandrels feature coats of arms, including those of the State of Victoria, the City of Melbourne, the Royal Arms and six of the seven municipalities that contributed to the cost of the bridge. For no apparent reason, that of the Shire of Malvern was omitted. The mouldings and cast iron balustrade along the top of the bridge and the lamp standards crowning the giant half columns are notable elements.

Princes Bridge is of historical, social, architectural and aesthetic importance to the State of Victoria

Princes Bridge is of historical significance for its role in the early establishment of main thoroughfares in and around the city. It is the third bridge at this site since the first timber bridge was built at this location in 1845. In 1885, seven municipalities agreed to contribute to the cost of the bridge, including South Melbourne, Prahran, St Kilda, Malvern, Brighton, Caulfield and Moorabbin, and its construction provided an important link between the city and ships anchored in Port Phillip Bay. These early thoroughfares, and in particular river crossings contributed greatly in forming the shape of the city. The bridge played a significant role in linking port, recreational and industrial facilities with the city, facilitating the economic, suburban and demographic development of Melbourne. Built between 1886 and 1888, the bridge is of historical importance as it represents a boom period in Melbourne, when a tremendous increase in traffic partly stimulated the requirement for a new, larger bridge.

Princes Bridge is of architectural significance for its substantial size and for the skilled stonemasonry demonstrated in the construction of the abutments and piers. Architectural details of particular note are the arched girders and the cast iron spandrel panels which contain the coat of arms of each municipal council, except Malvern, who contributed towards the cost of construction. The bridge represents a notable example of the work of contractor David Munro. Munro was also responsible for the construction of Queens Bridge and Sandridge Railway Bridge and who was a prominent contractor and speculator during Melbourne's boom period of the 1870s and 1880s.

Princes Bridge is of aesthetic and social significance as Melbourne's grandest bridge and as an important and prominent landmark. It is a contributory element in the distinct series of bridges which cross the Yarra within the city vicinity. The bridge is a symbolic entrance to the city of Melbourne and lies on the main axis of Swanston Street, St Kilda Road and the Shrine of Remembrance.