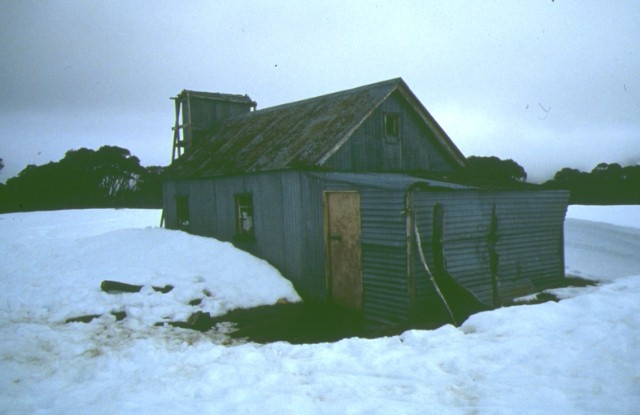 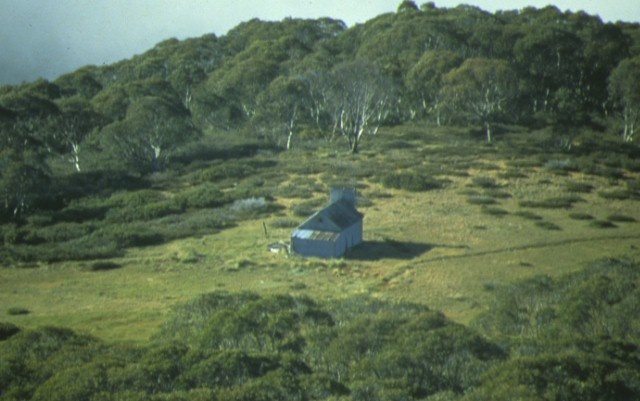 Spargos Hut was built in 1928-29 as a base for summer gold prospecting activities by William (Bill) Spargo, head of the Country Roads Board road gangs in charge of the reconstruction of the Alpine Road from Harrietville to Omeo. Spargo, who was born in Bairnsdale in 1888, was the son of a gold miner. He built his hut near Golden Point in the Mt Hotham ski village, just outside the Bogong National Park. It has been described as a hut built of corrugated iron with a wooden frame, which has never been altered. The annexe, eight feet wide, was built over permanent water. The whole of the interior of the hut was lined with hessian. Many of the locations for Victorian alpine huts and clubhouses of the 1920s and 1930s were chosen by Spargo, including Cope Hut on the Bogong High Plains built by Spargo in 1929 and classified by the National Trust, The Alpine Club, University Ski Club and Edelweiss Ski Club at Mt Hotham. All these locations were chosen because of their proximity to natural springs in the early 1940s Spargo achieved fame (but not fortune) when he discovered the rich gold reef, the Red Robin at Mt Hotham. In 1946 Spargo married an English widow, Evelyn Piper. The couple were later divorced after which Spargo left Mt Hotham, selling the hut to Harold Maddison, proprietor of the Porepunkah Hotel. From that time Spargo lived on Stradbroke Island in Queensland where he died in 1959. The hut, which is now owned by Nancy Sullivan, Maddison's daughter, has survived virtually intact, protected by its inaccessibility.

Spargos hut has both architectural and historical significance for the following reasons:

(1) As an intact example of the high country huts erected from the 1880s until the 1950s, mainly as cattlemen's and skiers' huts. Not many of these huts remain and, of these, few are intact. Spargo's hut has been protected by its inaccessibility.

(2) Spargos hut is an unusual example of the type, having been constructed as a base for summer gold prospecting activities.

(3) The hut has technical interest for its use of simple building materials, corrugated iron and wood, and for the construction of its annexe over a permanent spring.

(4) The hut has significance for its associations with the legendary bill Spargo, who chose the locations for and built a number of important Victorian alpine huts and clubhouses during the 1920s and 1930s. These include Cope Ht on the Bogong High Plains, the Alpine Club, University Ski Club and Edelweiss Ski Club at Mt Hotham. These were all located near permanent springs. The Drift Chalet at Mt Hotham (now owned by the CSIRO) used as a water supply a tunnel dug by Spargo as part of his gold seeking activities.