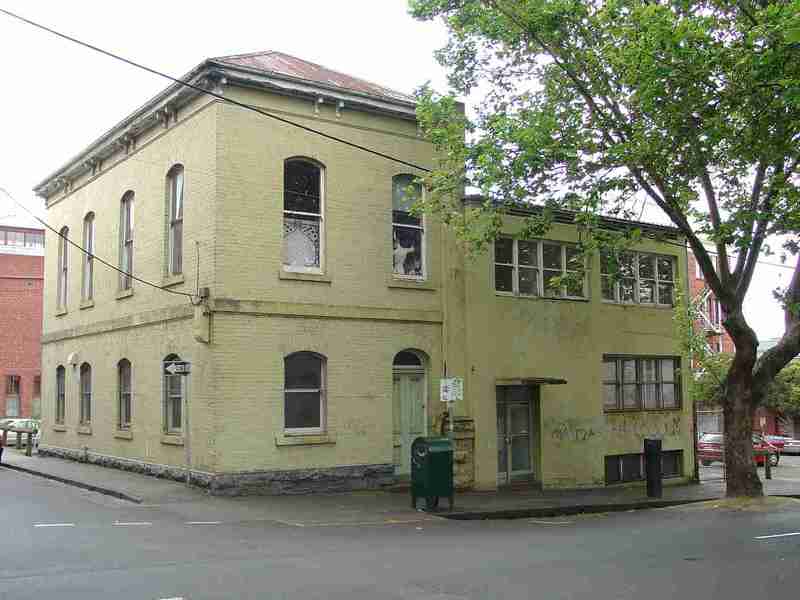 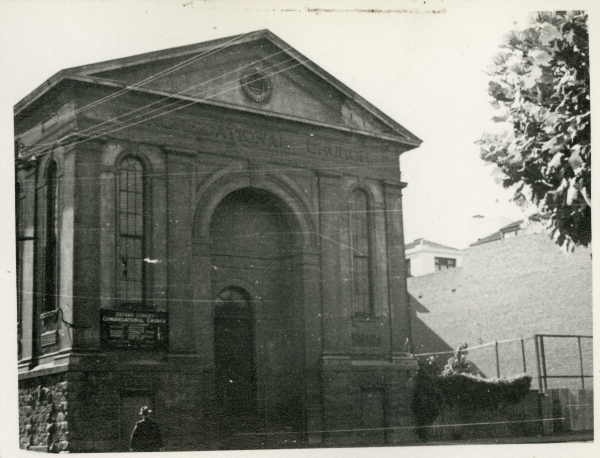 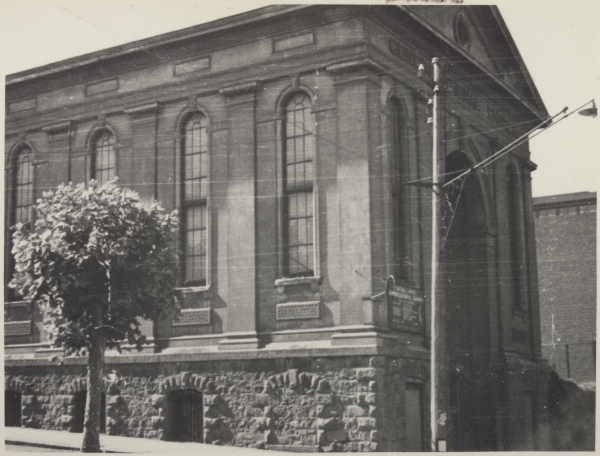 The former Congregational church hall is the final remnant of the church's presence on this site and is important in this respect. The remnant bluestone plinth and pilaster base are also of note, having their origins in the 1883 church and possibly the 1854 chapel.

The pattern of streets, determined by the government's pre-auction survey, yielded large allotments in a gridiron pattern ideal for speculation and intense subdivision.

Subdivision of these allotments commenced in 1848 (lot 73) and 1849 (lots 52 and 53), and by 1853 the whole of the area, bounded by Smith, Johnson and Wellington Streets and Victoria Parade, was built upon. The area was originally known as East Collingwood. It fell outside of the Melbourne Building Act 1849 and was rapidly developed in a relatively unplanned manner by speculators, as a place of small shops and cottages, many of timber.

By the early 1860s, Wellington Street rivalled Smith Street as a commercial precinct and many of the boot and brewing premises established on the Collingwood Slope had spread to the Flat and beyond. While the area contained predominately working class housing and manufactories of varying types, the southern area near Victoria Parade included some grander houses including Portia and Floraston, as well as a number of churches, schools and Dr Singleton's Dispensary in Wellington Street.

In 1883, Foy and Gibson established what was to become a retail and manufacturing empire in the area, when they opened a shop in Smith Street. From then until the 1920s, the entire block bounded by Smith, Wellington, Peel and Stanley Streets (originally occupied by houses, small factories and hotels) underwent a transformation into an industrial landscape which remains externally substantially intact. This major expansionary phase brought woollen mills, clothing manufacture, hosiery, bedding, metal goods and cabinet manufacture to the Heritage Overlay Area at a scale unprecedented in Melbourne at the time; this is reflected in the substantial warehouses which remain today. The Foy and Gibson complex is on the Victorian Heritage Register and hence is not in the Heritage Overlay Area but forms a major part of the history and context of the Heritage Overlay Area.

By the early 1890s the first phase of development in the area as a whole was almost complete but has since been eroded by mostly post-Second War development.

The MMBW plan of 1898 shows street trees in approximately the locations of the existing plane trees in Peel St as part of the urban fabric extant by the turn of the century. No trees were shown in Stanley St.

The main development period evident in the heritage overlay is that of the Victorian era. There is also a contribution from some well preserved Edwardian-era and inter-war factory buildings and individually significant places of all eras.

. Chimneys of either stucco finish or of face brickwork (with moulded caps);

- In an attached and mainly two-storey form with the elements described above for residences; and

Also a significant landmark within the heritage overlay (but not part of it because of its listing on the Victorian Heritage Register) is the Foy and Gibson complex with:

. One, two and up to five floor levels

. Less than 40% of the street wall face comprised with openings such as windows and doors, symmetrically arranged on the street facade.

. As a remnant area of substantially 19th mixed commercial, residential and industrial development that once typified the area and is distinguished by its high integrity with many surviving original shopfronts;

. For the contribution provided by well preserved Edwardian-era and inter-war factory buildings;

. For the area's historic context created by the massive and substantially intact former Foy and Gibson factory/ warehouse complex, a red brick and rendered complex dating predominantly from the late nineteenth and early twentieth century. The complex is characterised by a strong sense of mass and a consistency of materials (predominantly red brick with rendered dressings). The former Foy and Gibson complex is of particular significance: this retail and manufacturing empire, established in 1883, was an early example of a new type of retail venture which was based on the earliest department stores in Europe and the United States. The complex was also considered to be technologically advanced for its large scale use of steam and electric power;

. As a destination for many Melbournians who were employed here (particularly, the former Foy and Gibson complex), and to members of the community who travelled both from within the local area, and from further afield, to shop there and at the Foy and Gibson stores;.

. For the early street layouts, together with most original bluestone kerbs and guttering survive. These elements provide an appropriate setting for this collection of buildings and the mature Platanussp. street trees further enhance the period expression of the Heritage Overlay Area; and

. For key buildings of individual historical and architectural significance.