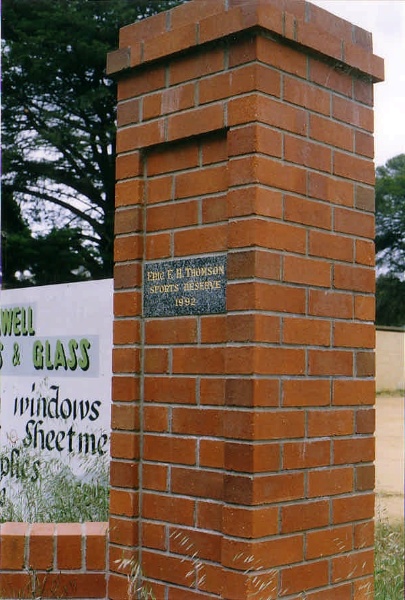 The Eric F.H. Thomson Sports Reserve, 42-58 Brunel Street, Great Western, has significance as an important historical and social recreational location in the township. The reserve was established in 1915 as a result of the formation of the Great Western Garden and Park Reserve Committee in 1914. The sports ground was developed soon after. Both the reserve and gate piers (particularly the plaque) have significance as a memorial to Eric F.H. Thomson. The Thomson family were well known and highly successful vine growers and wine makers at the Concongella vineyard in the 20th century, producing "Bests Great Western Wines".

The Eric F.H. Thomson Sports Reserve and brick gate piers, Great Western, are historically and socially significant at a LOCAL level. The reserve is associated with the establishment of the Great Western Garden and Park Reserve in 1914 and the subsequent development of a sporting oval and associated recreational buildings and areas. Both the reserve and gate piers are associated with and commemorate the contribution of Eric F.H. Thomson, local vine grower and wine maker of the famous Concongella vineyard at Great Western.