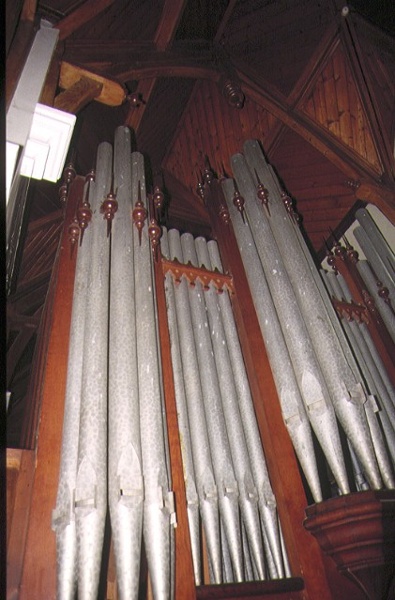 The pipe organ in St Augustine's church, Inglewood, was built by master organ-builder George Fincham in 1878 and was installed in St Augustine's church in the same year. Fincham, the son and grandson of London master organ-builders, was Victoria?s leading organ builder in the latter half of the nineteenth century, building approximately ninety new organs in the state.

The Organ is a two-manual organ of thirteen stops and remains virtually intact. It belongs to a group of organs built between 1874 and 1882 and which characterise Fincham's 'second period'. Apart from the introduction of electronic blowing, the organ still retains its original mechanism, pitch and cone-tuned pipeworks.

The Fincham pipe organ in St Augustine's church, Inglewood is of scientific (technical), aesthetic and historical significance to the state of Victoria.

The Fincham pipe organ in St Augustine's church, Inglewood, is of scientific (technical) and aesthetic importance as an intact example of a Fincham organ and a manifestation of Fincham?s outstanding skills and craftsmanship. It is important in particular for its intactness including original mechanical key, stop and combination actions, its original manual, and the preservation of the original natural finish of the 'spotted' metal display pipes.

The Fincham pipe organ in St Augustine's church, Inglewood is of historical significance for its association with pioneer master organ-builder, George Fincham who dominated Victoria's organ building industry from 1864. The instrument is historically important as an outstanding example of a Fincham pipe organ, issuing from the 'second period' (1874-1882) in George Fincham's career.