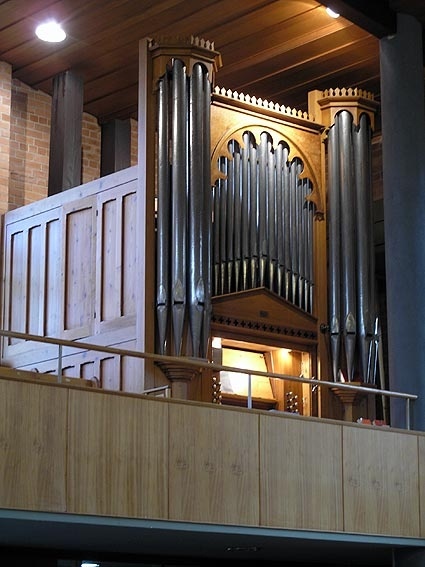 This organ was built by William Stone of St Kilda for the Congregational Church in St Kilda, and was officially opened on 20 March 1879. The old prefabricated iron church was sold in about 1888 and the organ was then moved into the new St John's Congregational Church in South St Kilda. William Stone played an important part in the growing organbuilding industry in Victoria. He was born c1830 in England and had undertaken an apprenticeship and worked in organbuilding in London before emigrating to Tasmania, where he established his own business. He arrived in Victoria in 1872 and opened a factory in Patterson Street, St Kilda in about 1875. By 1882 he employed his two sons and had built three organs, as well as having contracts for the tuning and repair of others. The organ was purchased for ₤1200 in 1973 by the congregation of The Avenue Presbyterian (now Uniting) Church in Blackburn, at the instigation of the church's organist Dr W Ralph. The church was designed by the Melbourne architect Keith Reid and built in 1959-60. The organ was restored and re-erected by members of the congregation under the direction of Dr Ralph. Laurie Pipe Organs were responsible for regulating the action and pipework. A recital was given in October 1979 to mark the centenary of the instrument.

The Stone pipe organ is installed in a gallery at the rear of The Avenue Uniting Church. It is a well-designed instrument with an attractive pine case, and exhibits a generous use of good materials and high quality workmanship. It is largely intact, retaining its original pipework, action, soundboards and windchest, console and case. All of the metal pipework is of spotted metal (a mixture of tin and lead) including the front pipes. The organ has an unusually bright and clear sound and is thus a fine example for the period. The builder's nameplate is attached above the keyboard. Work carried out in 1973 included stripping of dark varnish from the case timbers, the removal of gold paint, probably not original, from the front pipes, and the raising of wooden supports in the side towers to cover the pipe tops. It has two manuals, thirteen speaking stops, three couplers, and a mechanical action

The Stone organ is of historical significance to the state of Victoria.

The Stone organ is historically significant as an outstanding example of colonial organbuilding, and demonstrates the growth and quality of the industry in Victoria in the second half of the nineteenth century. It is the only organ built by William Stone, who played an important part in the growing organbuilding industry in Victoria in the 1870s, which is known to survive intact. It exhibits an excellent overall design, a high quality of workmanship and has an unusually clear sound.