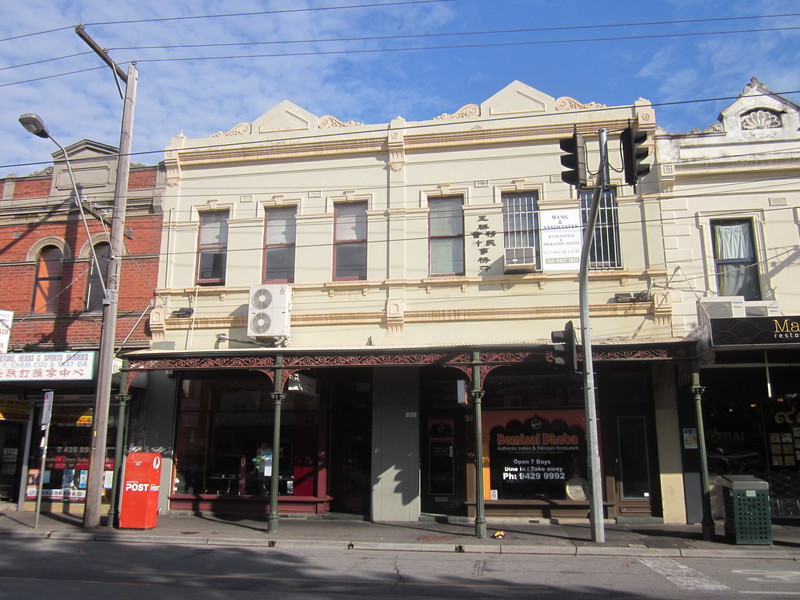 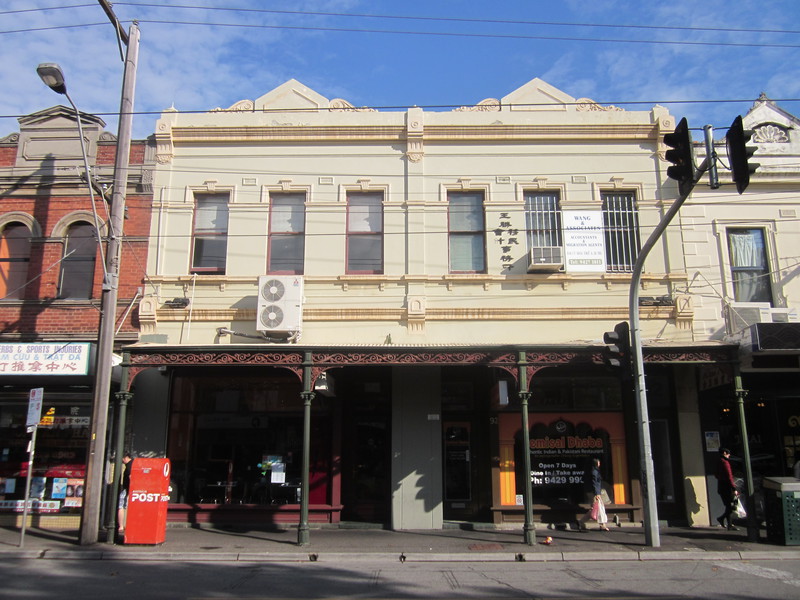 What is significant?
The property at 92-94 Victoria Street, Richmond, dates from the 1880s, and comprises a terrace pair of wider than usual two storey rendered brick Victorian shops and combined residences. The street facade has a rendered and overpainted first floor with moulded pilasters and moulded stringcourses. There are three double hung sash windows to each terrace, with the upper stringcourse incorporated into the window architrave, while the lower is incorporated with the window sills. There is also a moulded trapezoid shaped keystone set in the window heads and the sills are supported by moulded brackets. The pilasters are disengaged at the lower stringcourse, finishing in a moulded divider lug; there is another divider lug at the cornice line. Above the cornice, the parapet has two triangular pediments flanked by scrolled mouldings. The parapet conceals a pair of gable roofs, hipped at the southern ends, clad in corrugated galvanised steel and punctuated by a central chimney. The ground level shopfronts have what appear to be original aprons including bluestone plinths, and timber framing for the shop windows, including fanlights, although the framing/arrangement of the shopfronts may have been reconstructed sympathetically. The recessed entries also appear to be original; there is an additional entry door at the west end of no. 92, providing access to the first floor accommodation. The shops have a slightly convex shaped verandah canopy supported by cast iron columns with scrolled capitals and a lacework frieze. The verandah appears to have been rebuilt although the cast iron posts may be early elements.

How is it significant?
The property at 92-94 Victoria Street, Richmond, is of local historical and aesthetic/architectural significance.

Why is it significant?
The property at 92-94 Victoria Street, Richmond, which dates from the 1880s, is of local historical significance. It is located in an area of Victoria Street where commercial development began to be concentrated in the mid-nineteenth century, and was consolidated by the 1880s. The street subsequently continued as a local retail and service precinct for Richmond and Abbotsford residents, with a diverse mix of businesses, and a changing commercial character reflecting waves of immigration in the post WWII period. The property is also significant for its association with the major firm of funeral directors, John Allison/Monkhouse. John Allison, undertaker, was first connected with the property in 1883, continuing the business started by Henry Allison in North Melbourne in the 1850s. The subject building was the company's headquarters for many years. The property is additionally of local aesthetic/architectural significance, being distinguished by the comparatively high level of external intactness to the original design. The terrace pair is also unusually wide, in the Victoria Street context, with a finely detailed first floor facade. Elements of note to the first floor include triangular pediments with scrolled consoles, and moulded stringcourses incorporating decorative sills and architraves to the six windows. The timber-framed ground floor shopfronts with recessed entries appear original, including the bluestone plinths, or may have been sympathetically reconstructed. The survival of the additional entry door at the west end of no. 92, which provides main street access to the first floor accommodation, is also of note.