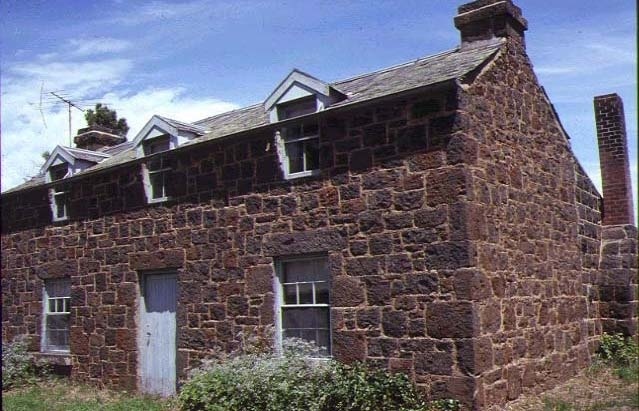 Source: Victorian Heritage Register -
Historic Buildings Council - Statement of significance: Cameron Hill (Later known as Brisbane) is a one and a
half storey farmhouse built in stages. The earliest part with its slate roof was most probably constructed in the
late 1850's when its site was owned by archibald and Ewan Cameron or in the early
1860's when it was owned by John Ritchie, Scottish early settler, Carpenter, Building contractor and vigneron.
The first addition was in the 1880's, a basalt (ashlar) extension with a simple lean-to roof, was added in the
1950's. The original house is largely intact and in good condition. Cameron hill has both architectural and
historical significance: 1) It is a rare
1) It is a rare surviving example of the one and a half storey vernacular
farmhouse in Victoria
2) The farmhouse, begun in the late 1850's or early 1860's and constructed of rubble basalt with three centrally
arranged attic dormers, is a universal vernacular type found in profusion in scotland and northern england in
the mid-nineteenth century. A basalt extension was added in the 1880's.
3) A ractangular outbuilding of rubble basalt, which also appears to have be been constructed in two stages in
the 1850's/1860's and in the 1880's, is also of significance.
4) The house has historical significance for its association with the Ritchie family. John Ritchie Junior, Scottish
born farmer, building contractor, carpenter and vigneron and his father, possibly one of Port Fairy's earliest
settlers, owned the property from the early 1860's.
5) More recently, it is associated with the Harvers, a well known Geelong farming family.

6) Finally, it has associations with the early history of
farming and the wine growing industry in the Geelong district, a most important region in colonial Victoria.