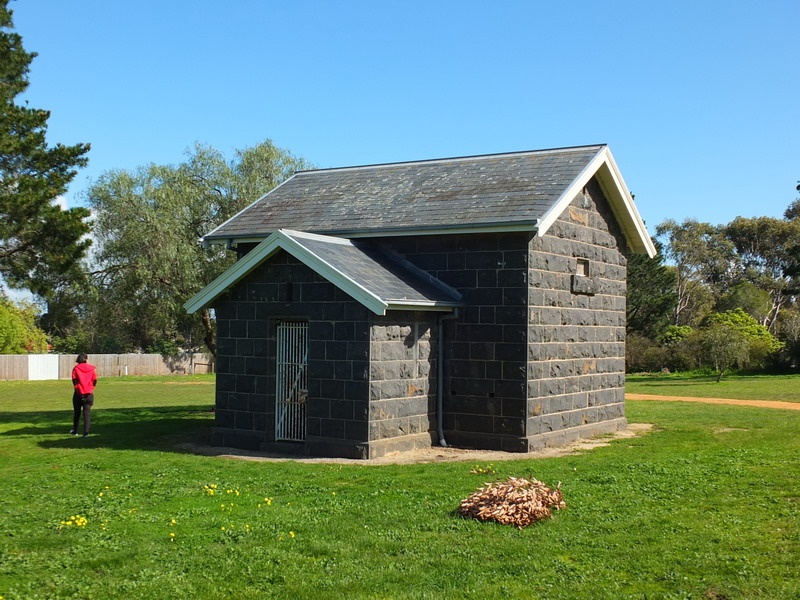 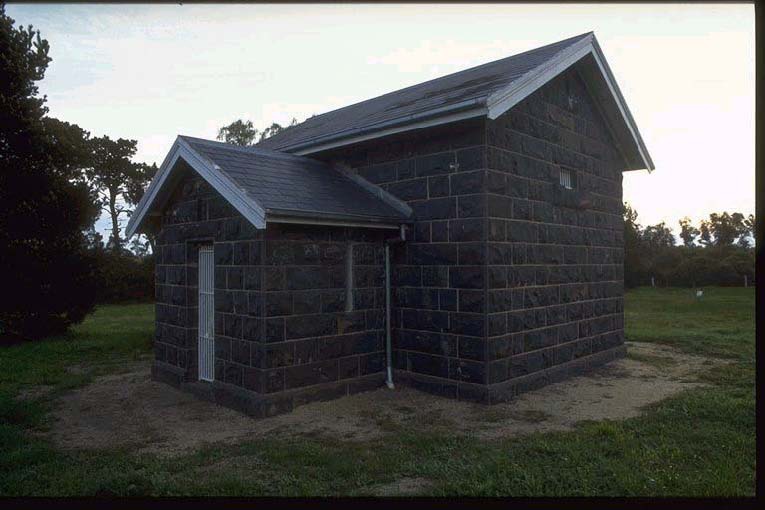 The former lock up, Victor Street, Bannockburn, has significance as a rare surviving example of a 19th century bluestone lock up and a physical legacy of early law enforcement in the Golden Plains Shire. Initially built at Lethbridge in 1860 and dismantled and relocated to its present site in 1869, the austere building is a representative example of standard Public Works Department design as expressed in the gabled forms clad in slate, square coursed basalt wall construction (with each block being numbered), moulded timber bargeboards, broad eaves, small window openings with iron security grilles, narrow ventilation openings in the gable ends and the iron grille gate in the front porch. Internally, the original function of confinement and imprisonment is reflected in the rudimentary and intact fabric, including the cobbled stone porch floor, timber-lined ceilings, timber floors to the cells, solid vertically-boarded cell doors and white-washed stone walls. The relocation of the building to its current site has not diminished its significance. The lock up functioned on the existing site for almost one hundred years. It is in good condition and is predominantly intact.

The former lock up at Bannockburn is architecturally, historically and socially significant at the local level. It represents one of only two surviving 19th century lock ups in the Golden Plains Shire.

The former lock up at Bannockburn is historically significant (Practice Note Criteria A & B) for its associations with the evolution and development of law and order (and particularly a police presence) in Bannockburn for almost a hundred year period between 1869 and c.1967. The building is a physical legacy of the 19th century court system, when the Magistrate's Court sat in the Bannockburn Shire Hall with a visiting police magistrate, and the lock up serviced prisoners awaiting trial.

The former lock up at Bannockburn is architecturally significant (Practice Note Criteria D & E) as a predominantly intact and rare surviving example of a standard Public Works Department austere lock up design of the late 1860s in the Golden Plains Shire. Although relocated from Lethbridge in 1869, it still reflects the original exterior and interior design and construction. The only other surviving lock up of similar design and construction in the Shire is at Smythesdale.

The former lock up at Bannockburn is socially significant (Practice Note Criterion G) as a symbol of 19th century law and order in the town. While no longer functioning for its original purpose, the lock up is recognised and valued as a tangible link to the town's public infrastructure heritage.