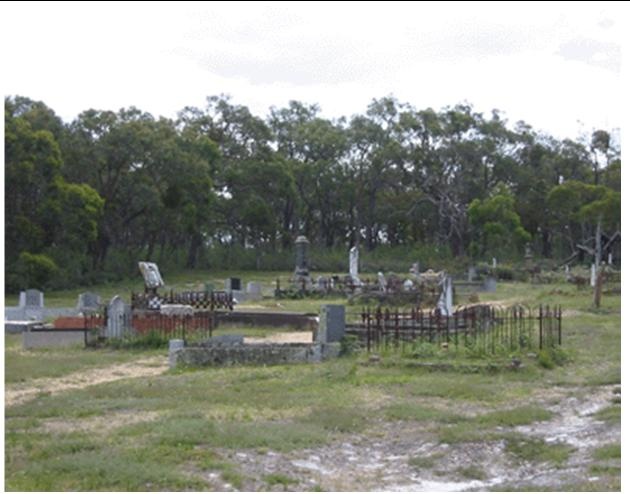 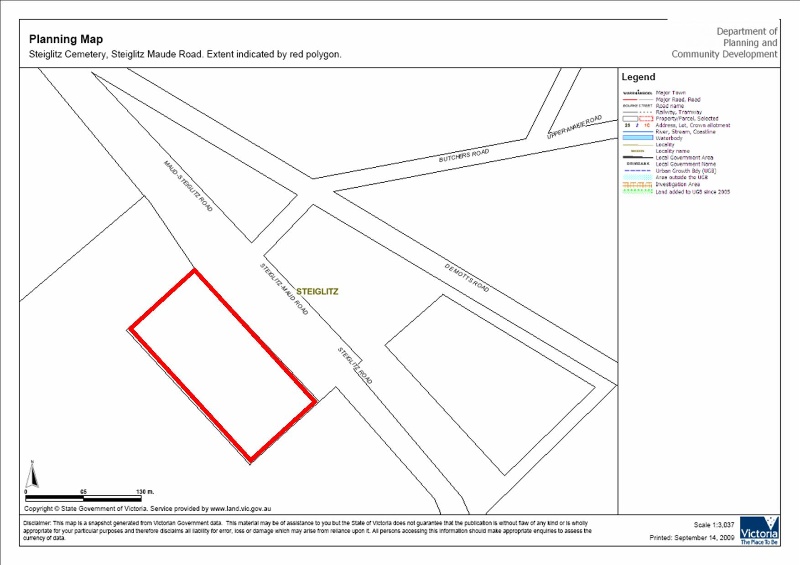 The Steiglitz General Cemetery is situated on allotment 68C Parish of Durdidwarrah, on the Steiglitz Road, approximately two km south of the former gold mining settlement of Steiglitz. A site for a general cemetery was proclaimed in 1860. It replaced an earlier cemetery, located on high ground above the Sutherlands Creek, on the Steiglitz-Meredith Road. According to one account, the original burial ground was not suitable due to the condition of the soil. The first trustees of the Steiglitz General Cemetery were elected in October 1860 and included local townsfolk: Benjamin Goulden, Archibald Weir, Michael Fitzgerald, James Western and John Anderson. The cemetery comprises approximately 5 acres and is divided into denominational areas, with clusters of graves widely distributed across the reserve and large spaces in between. Some of the graves have been delineated by elaborate wrought or cast iron fences. Interior plantings are minimal, but include a mature Cedrus deodara (Cedar) and Cupressus sempervirens (Italian Cypress). A post and wire fence defines the perimeter of the site, enclosing the cemetery from the surrounding bushland.

The Steiglitz General Cemetery is of historical, social and architectural (aesthetic) significance to the Golden Plains Shire.

The Steiglitz General Cemetery is of historical significance as an enduring record of those who have lived and died in the local community, as a reflection of the passing phases, ways of life and death, particular events, and as documentary evidence of the districts prosperity and hardships.

The Steiglitz General Cemetery is of architectural (aesthetic) significance for its range of tombstones, memorials and iconography reflecting the aesthetics of different periods and groups within the community, and for its typical interior plantings of Cedrus deodara (Cedar) and Cupressus sempervirens (Italian Cypress).