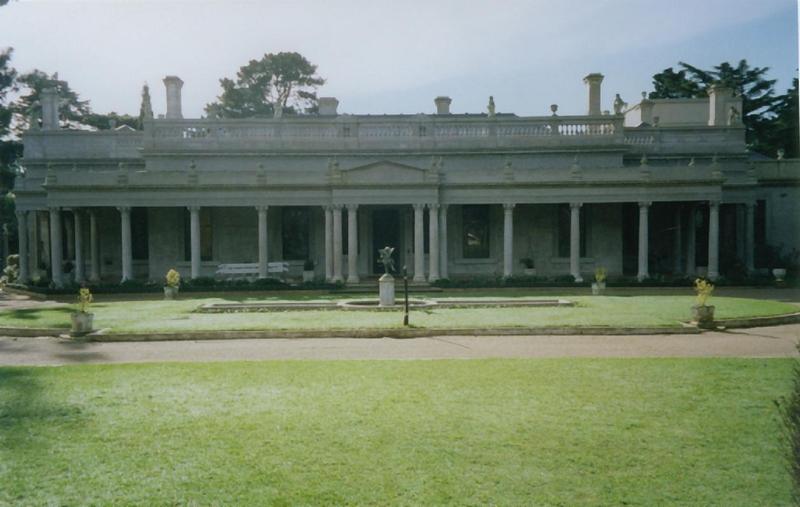 A fine villa erected by James Butchart c. 1863 with the proceeds of his business enterprises on the gold fields, in a free Anglo-Palladian mode with most elegant colonnaded verandah along the main south-west front, using columns of the composite order; & sun-moulded by a balustraded parapet & urns; though there has been some alteration to the interior and one end of the building it retains its full effect and is set in spacious grounds.
House Classified: 03/09/1973

Garden Significance:
Beleura, built c.1863, enjoyed as a summer retreat by a succession of owners, with the nucleus of the estate purchased in 1916 (after subdivision) by the Tallis family, then progressively enhanced and embellished until the death of John Tallis in 1996, is of significance:
- architecturally, as a fine villa erected by James Butchart c.1863 with the proceeds of his business enterprises on the goldfields, in a fine Anglo-Palladian mode with most elegant colonnade verandah along the main south-west front, using columns of the composite order, and surmounted by a balustraded parapet and urns; though there has been some alteration to the interior and one end of the building it retains its full effect and is set in spacious grounds;
- as an ensemble, comprising house, outbuildings, garden, grounds, interiors, contents and archival material, which evocatively encapsulates the life of the distinguished theatrical and musical Tallis family; although at times eccentric, all phases of this enhancement and embellishment (which sensitively retained the nineteenth century architectural features) are important in telling a story of wealth and pleasure;
- for its garden, which retains features from three main periods: the nineteenth century drives, rear courtyard and predominantly coniferous specimen trees; the early twentieth century input of the Tallis family such as the enclosure of the pleasure grounds and the incorporation of a formal pool designed by Harold Desbrowe Annear; and the highly individual embellishment of John Tallis, an unusual example of a mid-twentieth century formal garden based on the owner's direct experiences of the Mediterranean, which has a layout based on the original carriage loop and a design (including the rear courtyard and vegetable garden) that responds strongly to the main axis of the house;
- for its drives and outer grounds, which provide a still-generous context for the house and garden, and retain plantations of Cupressus macrocarpa, Pinus radiata and Eucalyptus citriodora; some features of the Beleura grounds (such as the original drive, now Tallis Drive, and some specimen trees) are now outside the current ownership but these still contribute to the importance of the property;
- for the relationship of Beleura to neighbouring summer retreats such as Nyora, Earimil (later Kamala), Manyung and Heronswood; these properties had their genesis in generously-sized crown allotments and now provide a precinct second only in importance in Victoria to the collection of hill stations at Mount Macedon.
Classified: 04/05/1998
File note 27/06/2011: G13011 amalgamated & filed with B0012