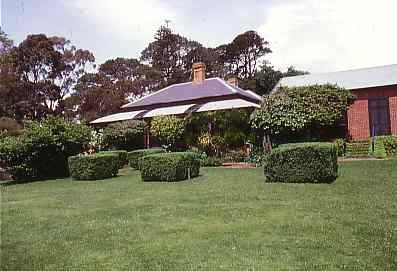 "The Briars" is of State significance being a fine example of an early pastoral property, with its homestead, garden, farm buildings and related rural lands and having both aesthetic and historic significance. The occupation by the pioneers Captain James Reid (1840-1846) and Alexander Beatson Balcombe (1846-1874) is of particular significance as is the continuing association with the Balcombe family which provided continuity of farming practice and preservation of much of the historic character.
Classified: 03/08/1961

Garden Statement of Significance
The ornamental garden, orchard and driveway plantation are of historic, aesthetic and scientific significance, both independently and for their integral contribution to the overall cultural significance of the "The Briars" property. The ornamental garden contains historic plantings including both bush and climbing roses, old varieties of Camellia japonica, Buxus specimens, and a number of other ornmental trees and shrubs. The orchard contains old and rare varieties of fruit trees including pear, mulberry and olive. The two major areas for fruit trees, the first to the east of the house beyond the kitchen garden area, and a larger area to the north-west of the house, which is possibly a later planting. The plantings performed both a functional and aesthetic role. An avenue of conifers and several stands of elm planted along the old drive still remain. In the area between the work sheds and the house there is a windbreak planting of predominantly conifers and also parts of the original hawthorn hedges which defined the paddock boundaries. The ornamental garden is characteristic of, and contains many features of a well-developed Victorian garden, with some elements predating the final garden layout. Many of the native plant specimens in the garden form its framework.
Garden Classified: 'Regional'
File note 14/08/2012: G13132 (The Briars Garden) amalgamated & filed with B0017
See also L10039