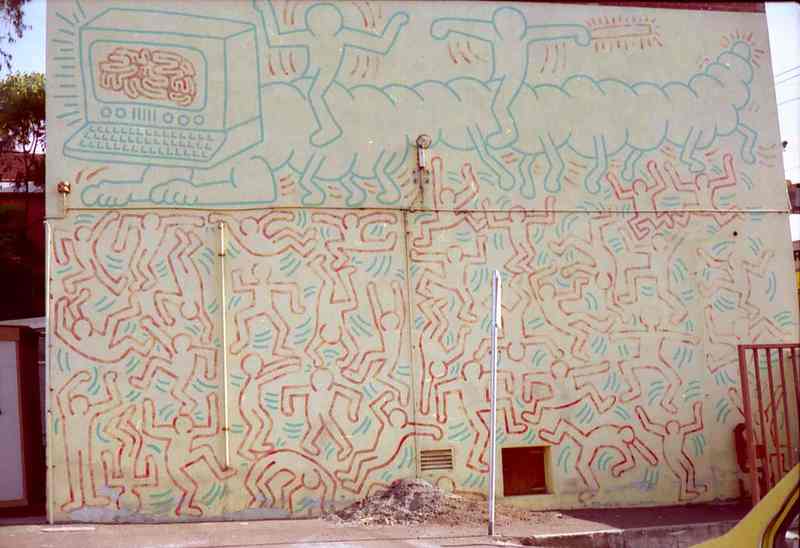 The Collingwood Keith Haring mural is one of only about 30 surviving similar outdoor works by Haring worldwide and his only surviving major outdoor work in Australia. The artist's highly individual and recognisable style appealed to and greatly influenced a generation of artists here and abroad and continues to do so. This work was created at a time when the artist was beginning to enjoy international success. Haring died at only 32 but left an impressive legacy of murals, painted steel constructions, prints and a large body of images which have been reproduced in various manners. The mural is entirely by Haring's hand, but the involvement of student assistants reflects his artistic and personal philosophy and his social awareness, exemplified by his art workshops for children, his campaign for Aids awareness and the establishment before his death of a charitable foundation.
Within 10 years of completion, deterioration of the wall occurred and the mural faded badly. Given the exposure of the Collingwood mural to the elements, the question arose whether the artist would have accepted deterioration of the mural or have condoned some sort of restoration. At that time the Haring Foundation noted that the artist left no clear instructions. In the mid 1990s, a preservation treatment was carried out to prevent further deterioration of the paint and the wall, but follow up maintenance was not carried out and further work is required. The Haring Foundation, which initially supported preservation of the mural, later recommended its replication by artisans. However, experts in paint technology, conservators and heritage groups feel there is technology available now that is better able to preserve the mural and furthermore they advise the mural cannot physically be repainted as the Foundation envisages without detriment to the artist's original concept.
The National Trust supports the preservation of as much of the original mural as possible using best international practice and relying on the advice of recognised experts in paint technology and historic preservation practice. The Collingwood mural is an important part of Victorian and Australian artistic heritage and deserves the best possible care.
Classified: 04/08/1997
Statement Revised:May, 2012