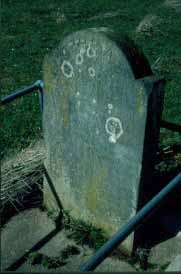 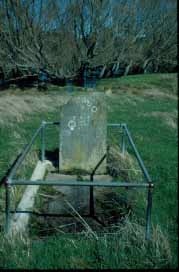 John White's lone grave at Carlsruhe, dates from his death in 1849, and is of State significance for the following reasons: - its importance in the course or pattern of Australia's cultural history as tangible evidence of life in this area during the first years of settlement in the 1840s. * - it has importance for its association with pioneer settlement in the area which had a significant role in the human occupation & evolution of the State - Its importance in demonstrating a distinctive way of life, custom, and design no longer practised and in danger of beign lost. It is of exceptional interest as a rare example of an extant late 1840s headstone as very little cultural fabric from pre-1850 remains in Victoria. - its potential to yield information that will contribute to an understnding of Australia's cultural history. * Its importance for information contributing to a wider understanding of Australian history, by virtue of its use as a reasearch and reference site. * Its importance for information contributing to a wider understanding of the history of human occupation of Australia. For example by providing information about the age and family of John White: and, in the epitaph, demonstrating the sentiment of the day. It also provides an example of the technical and craft skills and materials available. * For its value as a historical record, an individual memorial, its continuity and security, for the manner in which it inspires a respect for the dead, as a social document, and for its role in education and recreation. - its importance in demonstrating the principal characteristics of: (1) A class of Australia's cultural places, being late 1840s lone graves. * Its importance in demonstrating the principal attributes which are characteristic of the class. These are: the simplicity of the headstone, use of stone and a sentimental epitaph.