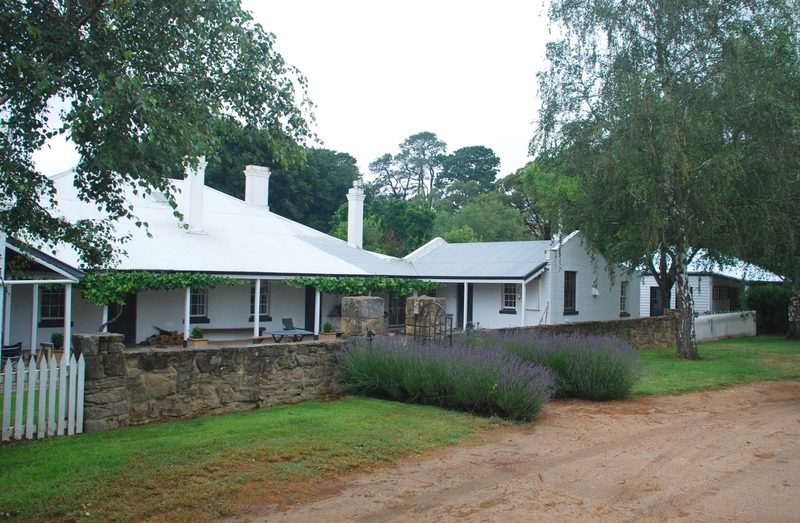 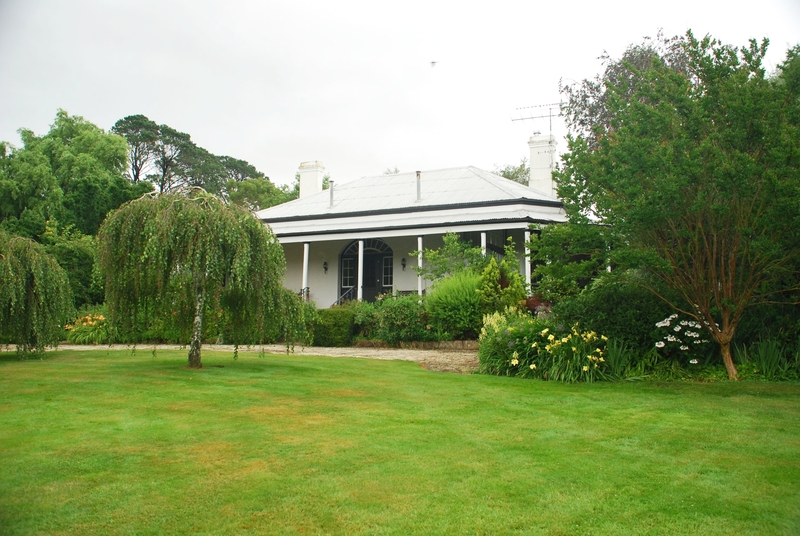 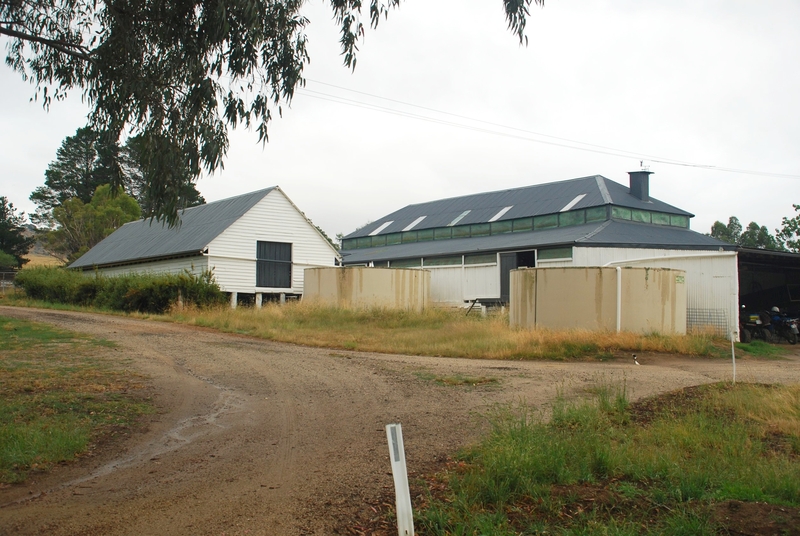 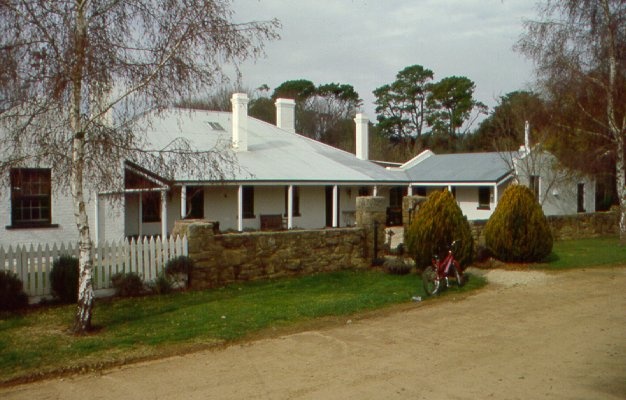 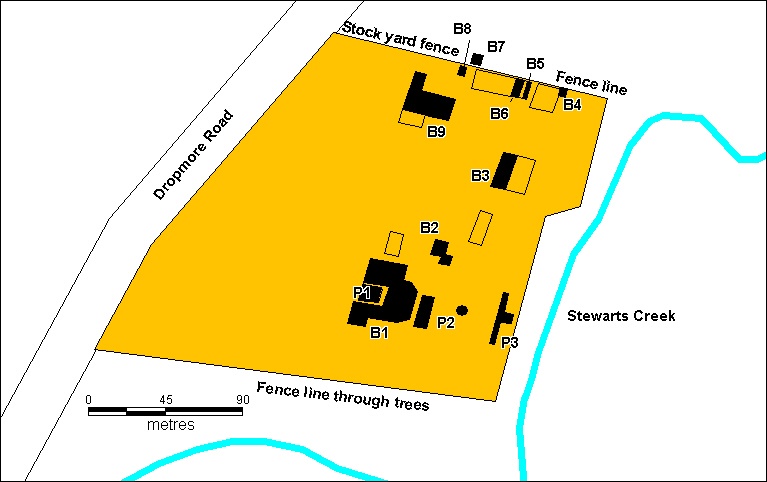 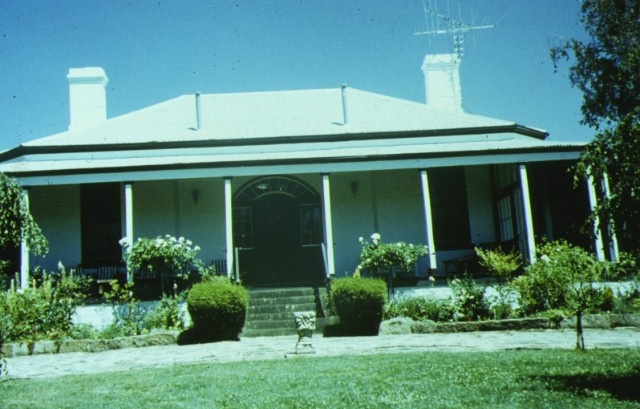 Habbies Howe pastoral run, originally known as Kobyboyn, was established by pastoralist George Taylor in 1841. Gideon Stewart, who acquired the run in c1843, was from Scotland. The later name of Habbies Howe was apparently derived from a district close to Edinburgh. Stewart arrived in Port Phillip with 500 pounds and 500 sheep via Van Diemens Land. After running several other stations he finally settled at Habbies Howe.

The precise date of the single storey house is not known. The date has been variously estimated between 1847 and 1852. It is constructed of bricks fired in a kiln on the run, pit-sawn timber and shingles. The shingles to the roof survive beneath a later cladding of corrugated iron, and are still visible beneath the verandah. Tradition states that the house was designed along the lines of an Indian bungalow, but this claim remains unsubstantiated. Internally the principle rooms are arranged around a central, top-lit octagonal shaped living room. Two wings at the rear of the house create a courtyard area. The kitchen wing to the south was originally detached. It was linked to the house in the 1960s, and was rebuilt following destruction by a falling tree in 1978. The c1870s wing to the north had additions to the design of architect Walter Butler in 1933.

It has been suggested that around 1933 the garden designer Edna Walling was engaged to advise on the redesign of the garden. Butler and Walling worked together on other house and garden developments, for example at Coombe Cottage, Coldstream. At Habbies Howe it is believed that Walling was responsible for the stone paving and walls, a stone seat, and steps down to Stewart Creek at the bottom of the garden.

The garden planting at the front of the house contains an extensive collection of colourful ornamental trees and shrubs under planted with perennials and bulbs. Opposite the front steps are two fine weeping silver birches (Betula pendula 'Youngii') and to the north a fine silver pear (Pyrus salicifolia 'Pendula'). Only one tree, an old pear tree (Pyrus communis) in a shrubbery to the north of the front lawn is thought to remain from the early period of the garden. There is also an interesting L-shaped planting east of the tennis court consisting of eight Purple ?leaved Dutch Elms (Ulmus x hollandica 'Purpuascens') which are uncommon in cultivation and appear to have been planted in the 1920s ?30s. The eastern edge of the garden is defined by Stewarts Creek.

The farm buildings include a large timber woolshed, the earliest part of which dates form the 1850s. There is also a timber stable, thought to date to the 1850s. In the garden there is a small gardener's cottage, with an iron flue, dating to c1870. Adjacent are timber gates and ornamental posts, marking the original vehicle entrance to the east side of the house. Along the northern garden boundary is an early picket fence.

Part of Kobyboyn was surveyed for a township in the 1850s. Only a very few buildings were erected, and the remains of a weatherboard building, Ryan's Hotel, was relocated in the nineteenth century to Habbies Howe.

How is it significant?
Habbies Howe is of architectural, historical and aesthetic significance to the State of Victoria.

Habbies Howe is of architectural significance for the highly unusual design of the house. Only one other house in Victoria is known to have a similar plan, Byramine Homestead at Yarrawonga, built in the 1840s. There is not known to be any connection, but Byramine is also claimed to be designed along the lines of an Indian bungalow.

Habbies Howe is of historical significance for its associations with the pastoral industry of central Victoria. The stables and shearing shed are early examples of their type. They are clearly shown in an early painting of Habbies Howe, c1850s, which hangs in the house. The painting has been passed on to successive owners. The gardener's cottage and shed located to the north side of the garden is an unusual building. The killing and meat hanging sheds are located close to the shearing shed, and are representative of their type.

The Habbies Howe garden is of aesthetic significance. The extensive granite stone paving in the courtyard, the walls and pillars, iron gate, and a seat referred to as the Walling Seat, are of a form and style associated with Walling's garden designs. The rich variety of ornamental trees and shrubs, roses and perennials and sweeping lawns provide an attractive setting to the house.