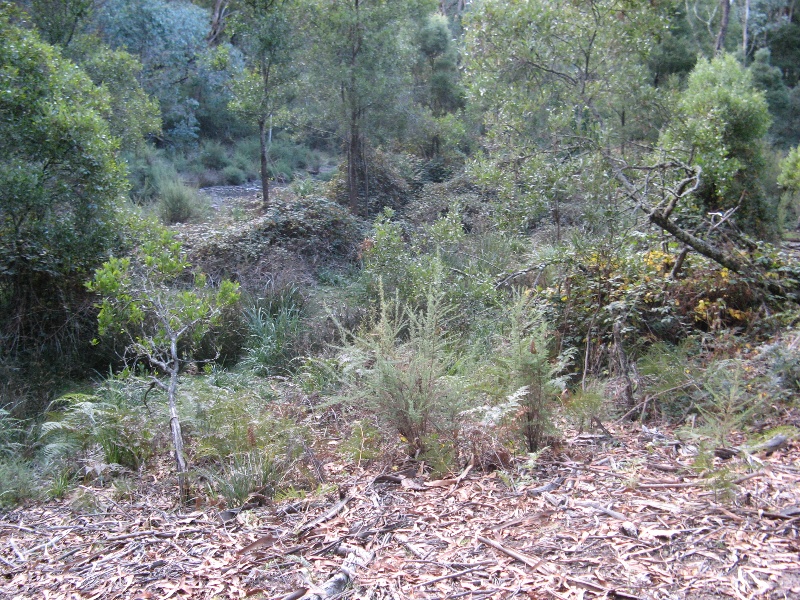 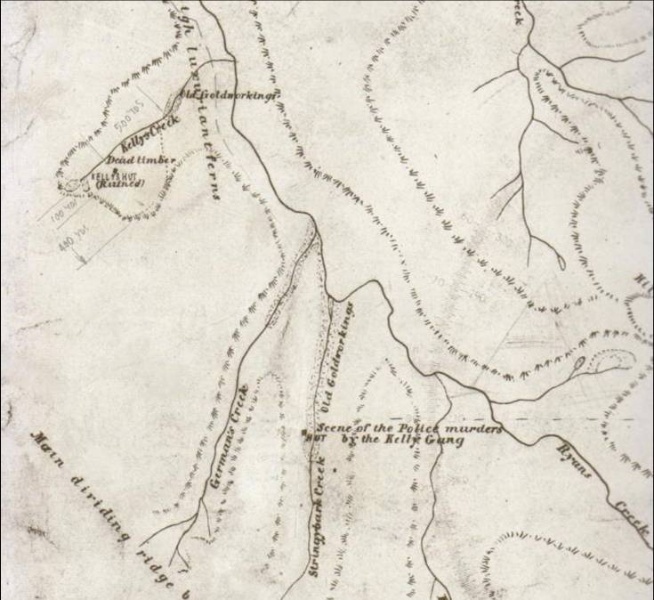 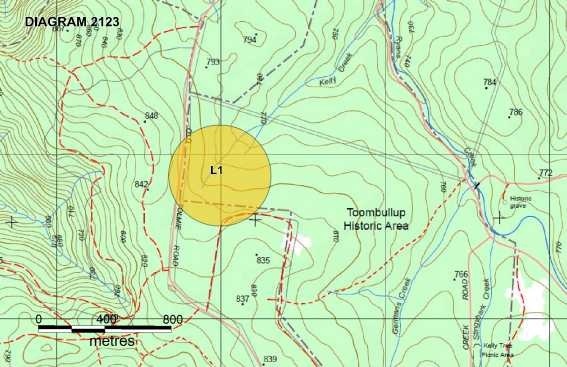 The camp at Kelly Creek (formerly Bullock Creek) was used by various Kelly Gang members as a remote bush hideaway from late 1876 until October 1878. The Kellys regularly made use of the site, where they occupied, rebuilt and fortified a derelict log hut, cleared the nearby bush for use as horse paddocks, panned and sluiced for gold in the creek and constructed a whisky still.

A number of historical documents exist which provide evidence for the location of the Kelly Gang camp site, on a small creek in the heart of the Wombat Ranges. The site location is shown on an 1884 surveyor's plan, marked "Kelly's Hut", and a Land Act file from 1885.

The site is located in a closed, steep-sided ravine that provided protection for the gang members. A small creek runs through the ravine and joins Ryans Creek to the northeast. Trees and scrub were cleared from around the hut to prevent any unnoticed approaches to the camp. Targets were drawn onto the trunks of gum trees for target practice.

A saw mill was constructed at the site around 1930 and it is likely that the hut and many of the site features may have been disturbed by the works associated with the mill, or covered beneath sawdust mounds. It is possible that some remnants from the camp are buried beneath the mounds that now cover the site.

One tree, known as the Kelly Target Tree, was not felled by the saw-millers and remained standing until approximately 1950. It is believed that this was one of the trees used by the gang for target practice. Part of this tree was removed from the site for storage by DSE in January 2004.

The Kelly Gang camp site is of historical and archaeological significance to the State of Victoria.

The Kelly Camp site is historically significant as the remote bush location where the Kelly Gang avoided capture in the late 1870s. On the morning of Saturday 26 October 1878, the Kelly Gang travelled from the camp to Stringybark Creek, where three police officers were shot and killed by Ned Kelly.

The landscape and setting of the place is significant because it explains why the site was chosen. The site is located in a closed, steep-sided ravine that provided protection and seclusion for the gang members.

The Kelly Camp site is archaeologically significant for its potential to contain archaeological artefacts and deposits that relate to the occupation and activities of the Kelly Gang members.