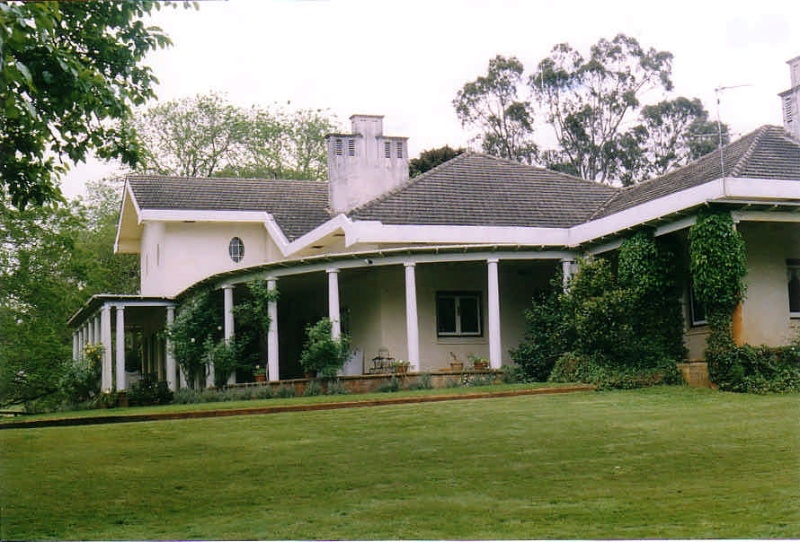 Allanvale Homestead 1334 Western Highway at Great Western, has significance as a moderately intact example of a 19th century sheep station with the evolution of the property reflected in the various building developments dating from the mid 19th century until the early-mid 20th century. Taken up by John Sinclair in 1841, the property was originally known as Sinclair's Run and soon after as Allanvale during the occupation of John Allan. A legacy of this period is possibly the outbuilding built of drop slab construction. Allanvale has significance for its long-term associations with three generations of the Kilpatrick family. In 1919, W.A. and Helen Kilpatrick commissioned the eminent Melbourne architect, Harold Desbrowe-Annear, to design the main house, which survives as a highly intact legacy of his architectural achievements. Other buildings that contribute to the significance of the place include the stables, woolshed, shearers' quarters and the rammed concrete motor garage that reflects the wide use of concrete construction at Allanvale in the early 20th century.

The main house at Allanvale is architecturally significant at a STATE level. It demonstrates several original design qualities that include the two prominent gables (having boxed eaves) forming two major axes, and the lower hipped roof forms that project from these gables. Other intact or appropriate qualities include the predominantly single storey height, roughcast brick wall construction, tiled roof cladding, stepped rectangular stuccoed Art Deco-like chimneys, oval windows, Serliana under the entrance gable, Tuscan porte cochere, and the wide eaved colonnade that curves around the perimeter of the western and southern sides of the house. Internally, the small hall and the double-height living room panelling to the door tops in local timber are also significant. Other significant internal qualities include the long, low fireplace dominated and built-in display cases and drawer in the living room, banks of sash windows with separate fly-screens, timber stairs that lead to the room above the hall, dining room panelled passages, and the bedrooms fitted with timber circular built-in corner cupboards.

The stables, woolshed, drop slab outbuilding, motor garage, and shearers' quarters are architecturally significant at a STATE level. These outbuildings demonstrate original and early design qualities for Victorian, Late Victorian and Interwar Vernacular styled farm buildings. They are a legacy of the architectural development of the homestead complex between the mid 19th and early 20th centuries. The landscaping, including the post and rail fencing, grassed paddocks and mature trees, and the immediate landscaping surrounding the main house, also contribute to the aesthetic significance of the place.

Allanvale Homestead is historically significant at a STATE level. It is associated with some of the earliest farming developments in the Great Western area, dating from the 1840s. In particular, Allanvale has associations with John Sinclair, original owner of the land holding then known as Sinclair's Run from 1841. The property also has associations with John Allan from the early 1840s, when the homestead was named Allanvale. There are also associations with Samuel Davidson, owner in the 1890s who had built the eight-stand woolshed which was one of the first in the western half of Victoria to use machine shearing equipment. It is especially the associations with the Kilpatrick family where the property bears its foremost historical significance. Three generations of the Kilpatrick family, particularly William Kilpatrick and W.A. and Helen Kilpatrick, have played a critical role in the establishment of Allanvale. It was W.A. and Helen Kilpatrick who commissioned the eminent Melbourne architect, Harold Desbrowe-Annear to design the main house in 1919, after the first house was destroyed by fire. The small cemetery on the property is also historically significant for its associations with Sarah Ann Boundy, whose grave is marked by an engraved timber paling. She died in 1848 aged four years, the daughter of John and Mary Boundy.

Allanvale Homestead is scientifically significant at a LOCAL level. The use of concrete construction of the counting pens near the woolshed, fence posts and the building of the motor garage, represent an innovative technique for the early 20th century in a rural farming situation.