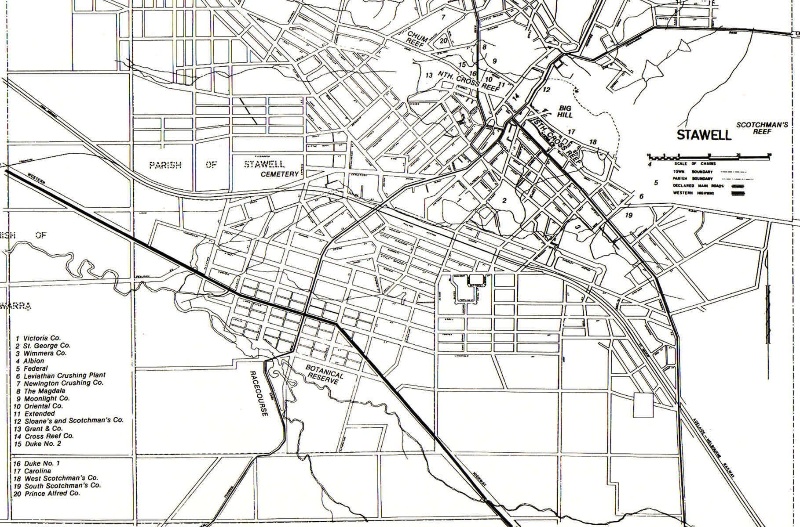 In December 1868, Stawell's mining registrar reported that there had been four years of successful quartz mining on the field. This record had been achieved not by any one company but a host of small claimholders, eg. in March 1867 there were 71 claims being worked on 11 reefs. The uninterrupted success of the small claimholders, according to the mining registrar, was beginning to attract the attention of outside capital, instigating an investment spree. This spree led to the rapid formation of numerous joint-stock (public) companies and the marking off in leases of a very extensive area of country, principally to the north-west of the worked reefs. The investment spree, which saw £12,000 invested in machinery in three months, proved to be unsuccessful. The field's fortunes was quickly reversed when two of the old established mines - the Pleasant Creek North Cross Reef and the Oriental - commenced producing rich gold from below the 600-ft levels. The North Cross, and to a lesser extent, the Oriental Company, were to dominate the field's gold production through the 1870s. Their success on the deep formations encouraged others: such as the Magdala, Prince Patrick, Prince Alfred, Carolina, Great Northern and Newington & Pleasant Creek companies.

The Oriental Mine site is historically and scientifically important at a LOCAL level as a substantially intact example of an important gold mining technique. Gold mining sites are of crucial importance for the pivotal role they have played since 1851 in the development of Victoria.

Overall the Oriental Mine site is of LOCAL significance.