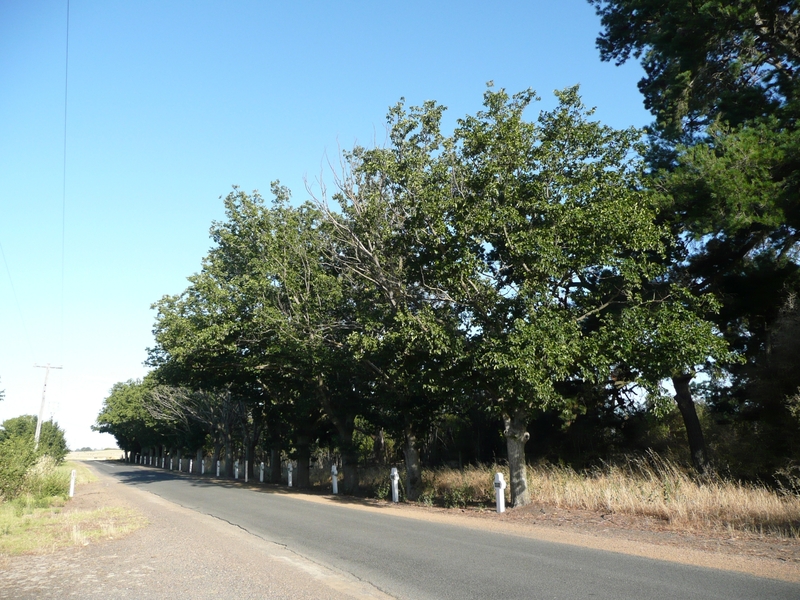 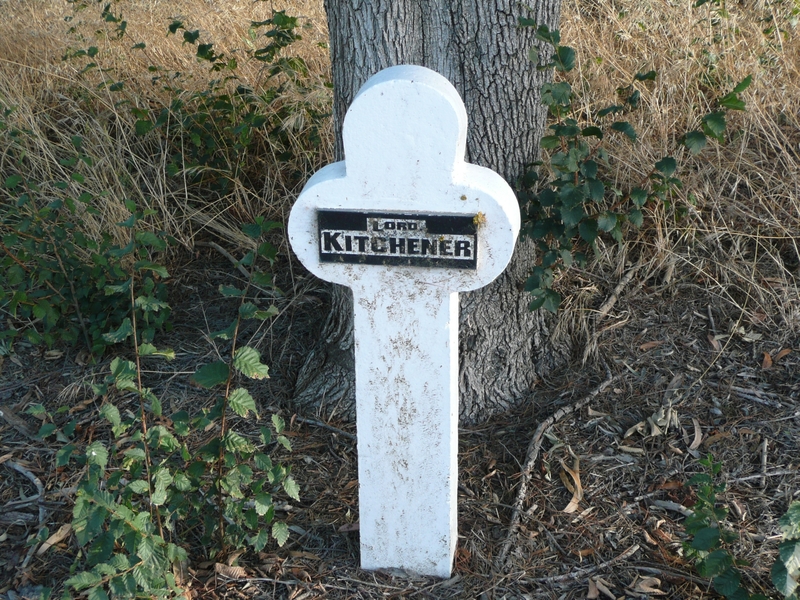 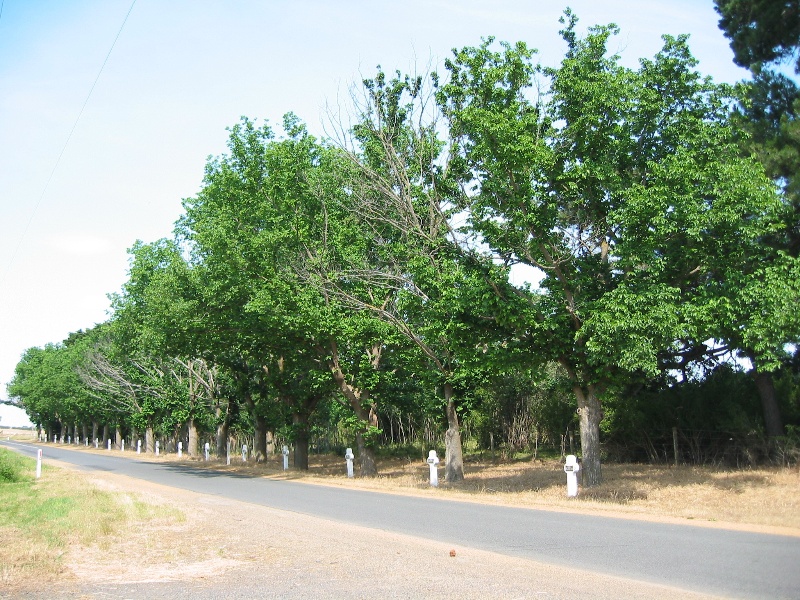 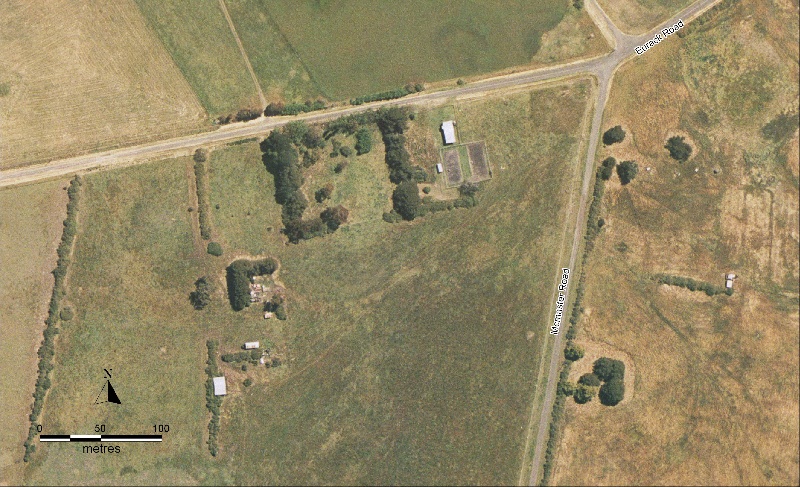 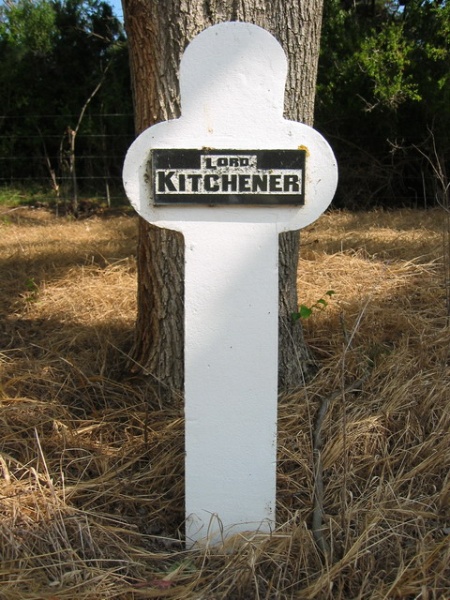 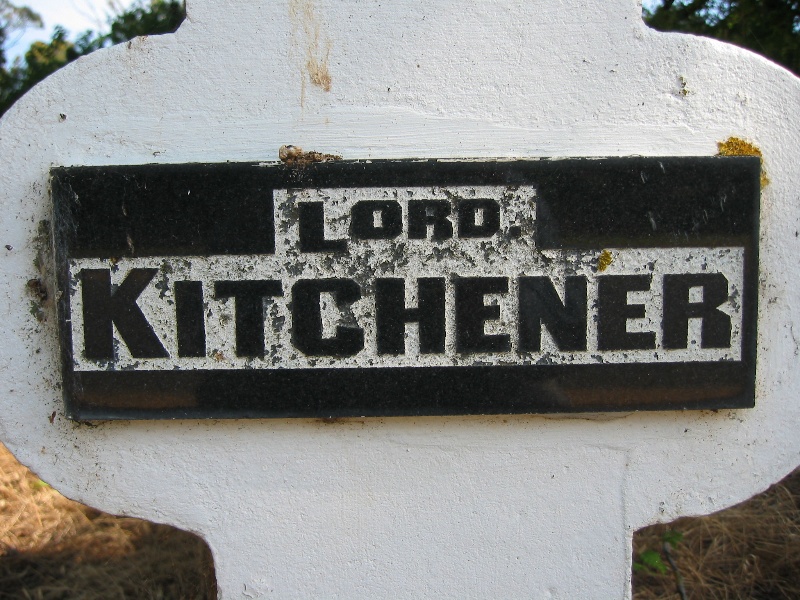 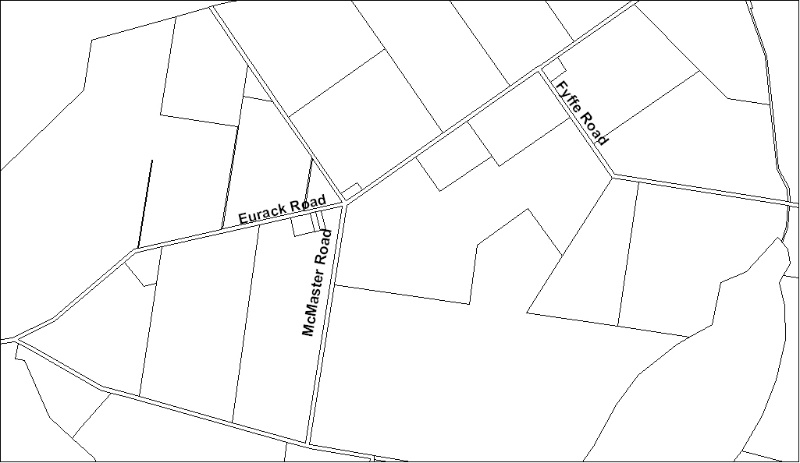 The Eurack Avenue of Honour is a World War I memorial on Eurack Road commemorating the 26 soldiers from the district who enlisted for the war. The planting of the Avenue commenced as an Arbour Day project for the Eurack School in May 1916 on the initiative of Lieutenant George Pentreath, then head teacher of the school who enlisted in July 1916. The Avenue was planted on Arbor Day, Friday 28 July 1916 in front of the Eurack School, general store, post office and church, the centre of the small settlement that sprang up after the Eurack Estate was subdivided for closer settlement in 1891. The memorial is a single row of 20 Ulmus x hollandica (Dutch Elm) planted along the south side of Eurack Road. Each tree is marked with a stylised white painted concrete cross bearing the name of the soldier/s it commemorates inscribed on a black marble plate. Six of the trees are dedicated to brothers. One of the crosses commemorates Lord Kitchener, the British Secretary of State for War who was killed in 1916 when HMS Hampshire struck a mine en route to Russia.

The Eurack Avenue of Honour is of historical, aesthetic and social significance to the State of Victoria.

The Eurack Avenue of Honour planted on 28 July 1916 is historically significant as one of the earliest known of this form of war memorial in Victoria, followed by memorial plantings in Maldon, August 1916 and Ballarat, 1917. It is also significant for exemplifying rural Victoria's reaction to World War I. It is representative of plantings that first appeared in Australia during World War I commemorating all those who enlisted for service in an egalitarian form where each individual, regardless of rank, was equally recognised for their service. The Avenue has significance for its commemoration of Lord Kitchener and has no known comparison in Victoria.

The Eurack Avenue of Honour is of aesthetic significance as an intact and distinctive commemorative planting. The uniform plantings of the trees and the stark concrete crosses in their isolated surroundings combine to create an imposing cultural landscape.

The Eurack Avenue of Honour is of social significance for its relationship with the community as a memorial to those who served in World War I and for its continuing commemorative importance. The Eurack Avenue of Honour and dedication plaques remain as an indication of the involvement of Victoria's small communities in commemorating the sacrifices of their volunteers, along with the loss and sorrow experienced by small rural areas like Eurack.
Show more
Show less
All information on this page is maintained by Heritage Victoria. Click below for their website and contact details.