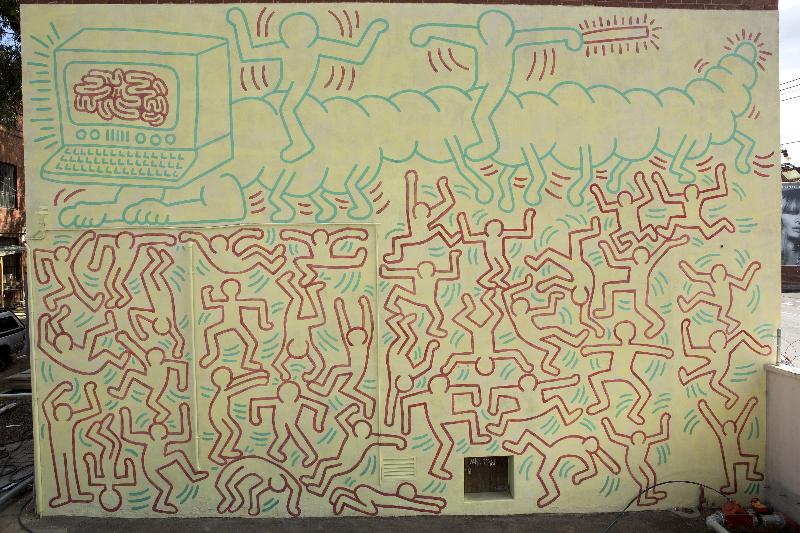 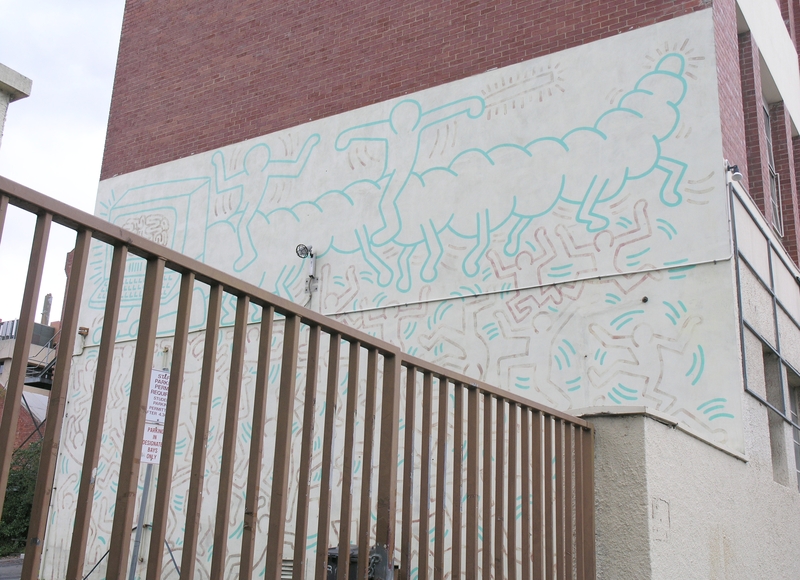 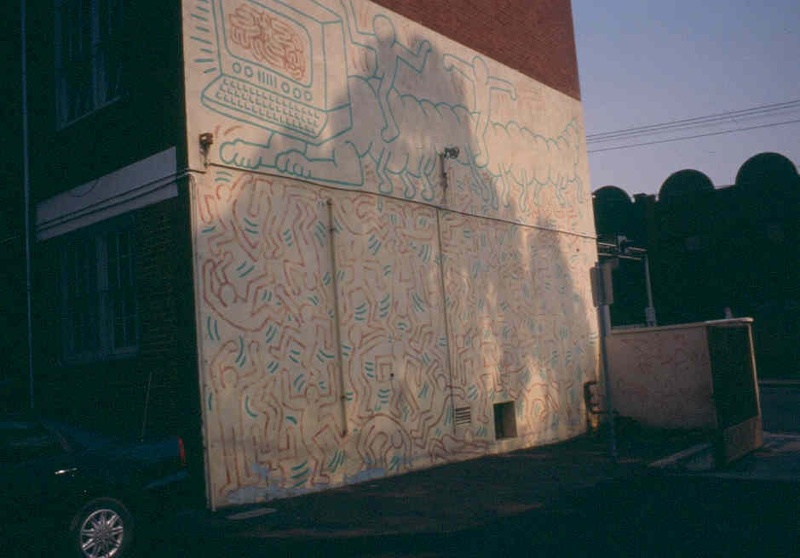 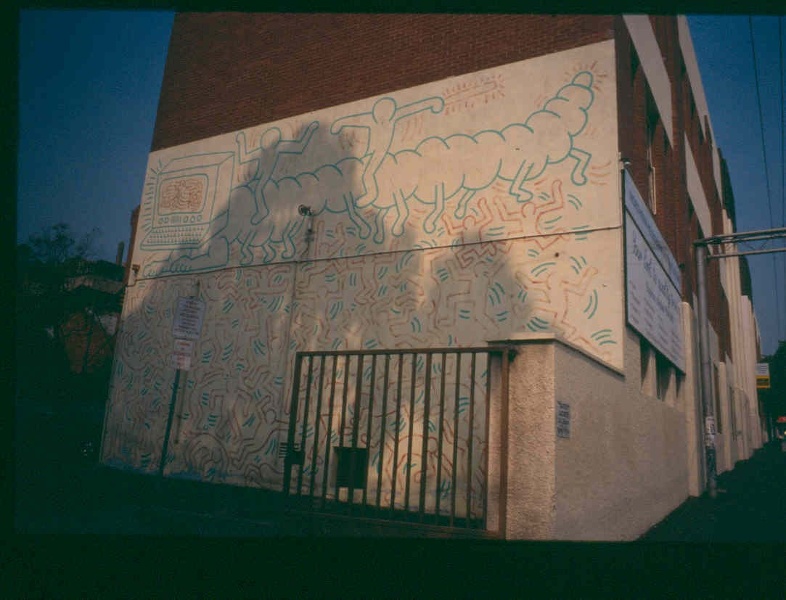 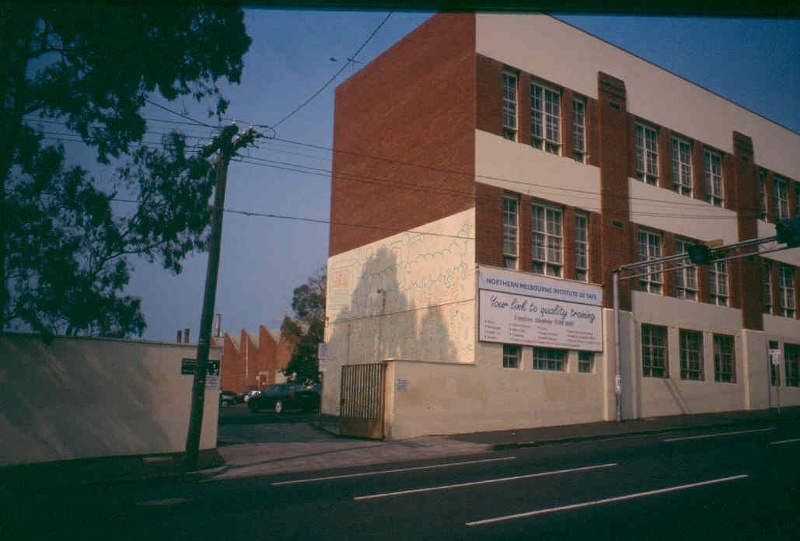 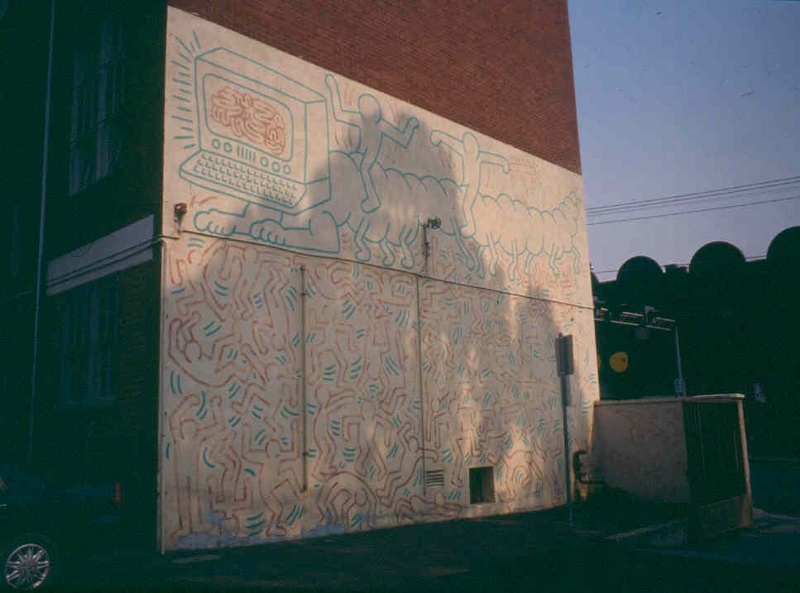 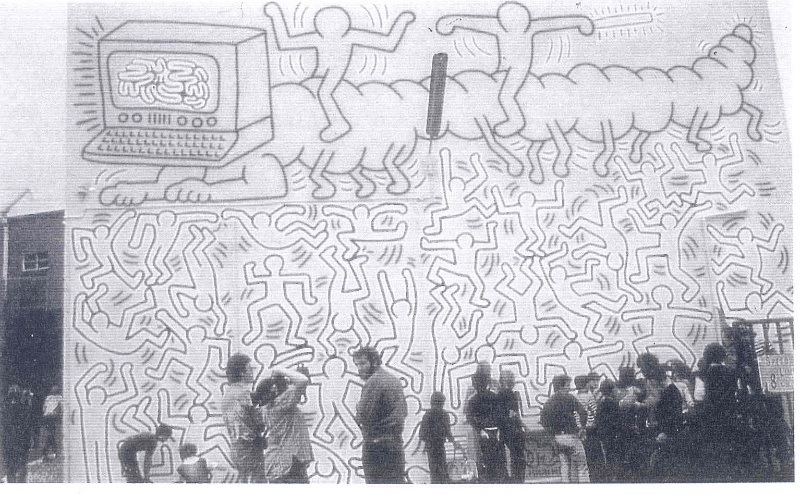 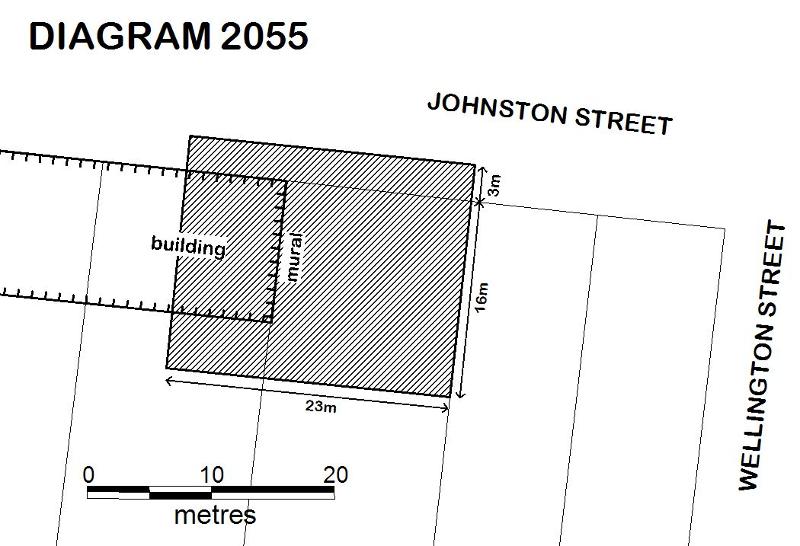 The Keith Haring Mural is a large work of art by Keith Haring. It is painted onto a cement panel which is located on the bottom half of the red brick wall at the eastern end of the former Collingwood Technical School. The cement panel and mural measure 7.4 x 11.5 metres. The mural has a yellow background and depicts moving red and green figures of people and a large creature. Three metal conduits and a pipe attached to the wall (three vertical and one horizontal) are also part of the composition (a fifth metal pipe and light which were originally part of the composition are no longer present). A small wooden door (measuring 70cm wide and 65cm high) has the artist's signature and baby symbol painted on it.

The New York based artist Keith Haring (1958-1990) visited Melbourne between February and March 1984. During this time he created a number of works, the largest, most enduring and visible of which is the mural on the eastern wall of the former Collingwood Technical School. While Haring painted, he played hip hop music on his Kenny Scharf painted ghetto blaster, and spoke and danced with pupils from the Technical School.

From the early to mid 1990s the mural began to appear faded. The pale appearance was caused by a layer of white pigment which had migrated to the surface. The red paint was also peeling. Following several public campaigns, the vibrancy of the original paint was returned by conservation treatment, a technique which preserved Haring's artistic hand, or what he referred to as his 'line' later in his career.

The mural is painted onto a cement panel which is located on the bottom half of the red brick wall. The yellow background of the mural was painted using rollers by students of the Collingwood Technical College on 5 March 1984 using a colour believed to have been chosen by Haring. Keith Haring painted the red and green figures with a brush by hand on 6 March 1984.

The whole background of the mural is a bright yellow. The upper half depicts a green hybrid sphinx/caterpillar monster with a computer monitor for a head. The monitor has a red brain or intestines inside it. The monster is ridden by two faceless green human figures holding red radiating 'power' sticks. The lower half of the mural consists of vibrant dancing figures in red with green emphasis lines around them to create the effect of movement. A small wooden door has the artist's signature and baby symbol painted on it.

The Keith Haring Mural is of historical, aesthetic and social significance to the State of Victoria. It satisfies the following criterion for inclusion in the Victorian Heritage Register:

Criterion A: Importance to the course, or pattern, of Victoria's cultural history.

Criterion B: Possession of uncommon, rare or endangered aspects of Victoria's cultural history.

Criterion G: Strong or special association with a particular community or cultural group for social, cultural or spiritual reasons. This includes the significance of a place to Indigenous peoples as part of their continuing and developing cultural traditions.

Criterion H. Special association with the life or works of a person, or group of persons, of importance in Victoria's history.

The Keith Haring Mural is significant at the State level for the following reasons:

The Keith Haring Mural is historically significant because Haring's visit to Australia profoundly affected the course of Australian art. He influenced Australian artists, and in the time before mass media Haring brought the New York style of graffiti to Australia. The mural's popular culture themes, including an early warning about the effects of technology on humanity and the depiction of modern dance movements, remain relevant. [Criterion A]

The Keith Haring Mural is the only large scale and publically accessible work to survive from Haring's visit to Australia in 1984 and one of the very few of his outdoor murals worldwide which is still in his hand and has not been fully or partially repainted. [Criterion B]

The Keith Haring Mural is aesthetically significant as an excellent example of 1980s public art associated with popular music and dance culture. It is an outstanding extant example of Haring's work and demonstrates his strong confident lines, bright vibrant colours and kinetic figures. [Criterion E]

The Keith Haring Mural is socially significant for the diverse Victorian communities which feel attachment, associations and ownership of it. These communities include artists, the gay community, the general public, the Collingwood and Fitzroy communities, former staff and students of the former Collingwood Technical College, international visitors, people living with HIV/AIDS, contemporary art curators, conservators and heritage professionals. Little vandalism, graffiti or tagging has ever occurred on the mural also indicating, without words, the importance of Keith Haring's original work to the graffiti and street art communities. [Criterion G]

The Keith Haring Mural is historically significant as a rare work of Keith Haring (1958-1990) located in Australia. It is a rare example of an exterior mural by one of the most influential artists of the 20th century which is still in his own hand. Haring was is an internationally renowned Pop artist and was integral to the development of the now international phenomenon of street art. As a role model and advocate for gay artists, public and graffiti artists, and for his AIDS activism, Haring's influence was far reaching. [Criterion H]

The Keith Haring Mural is also significant for the following reasons, but not at the State level:

The mural is significant for its prominent inner city location and is indicative of the changing physical and social landscape of a former working class suburb. It has become highly valued by the residents of the City of Yarra and inner Melbourne.

The mural has just been restored - looks amazing now.