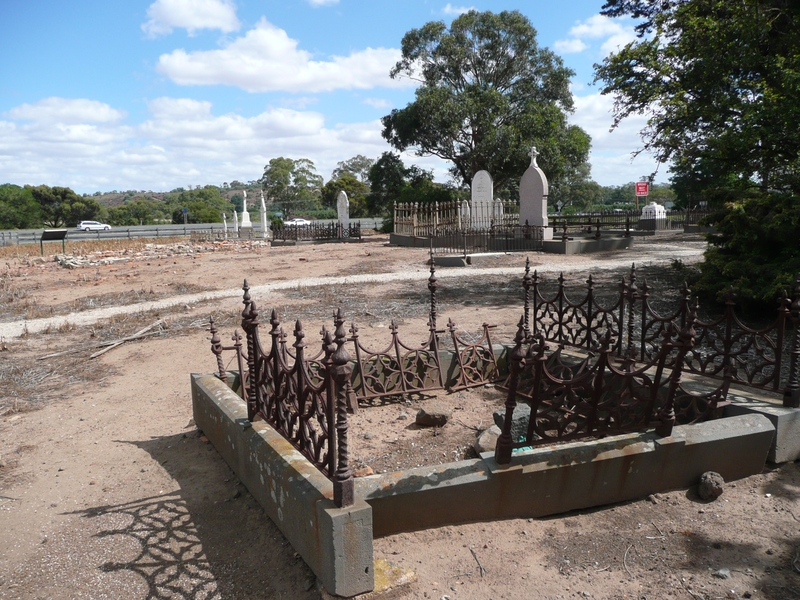 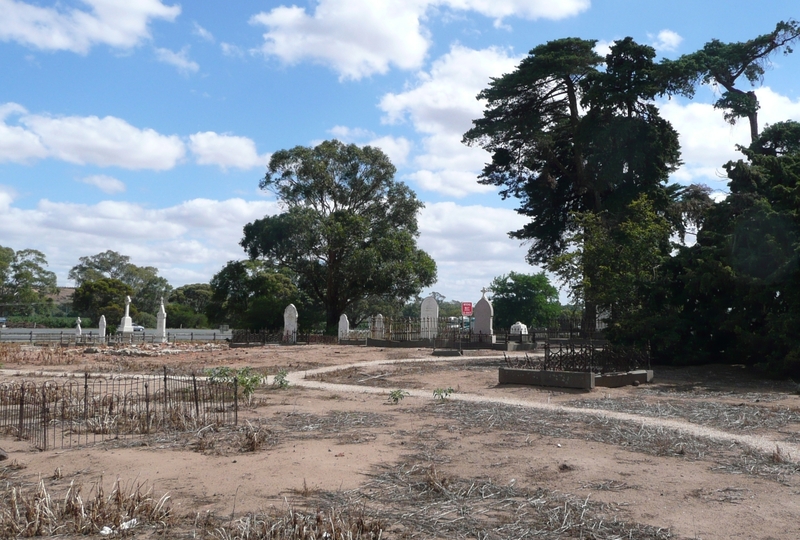 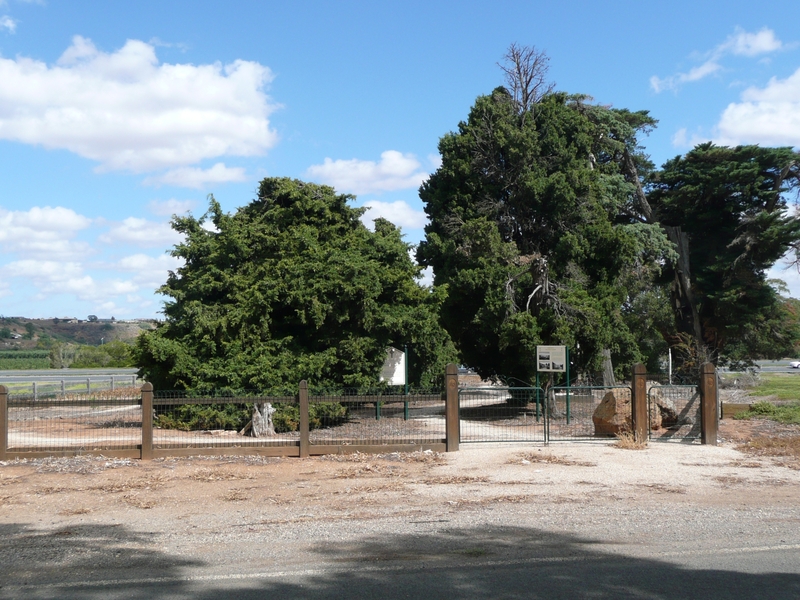 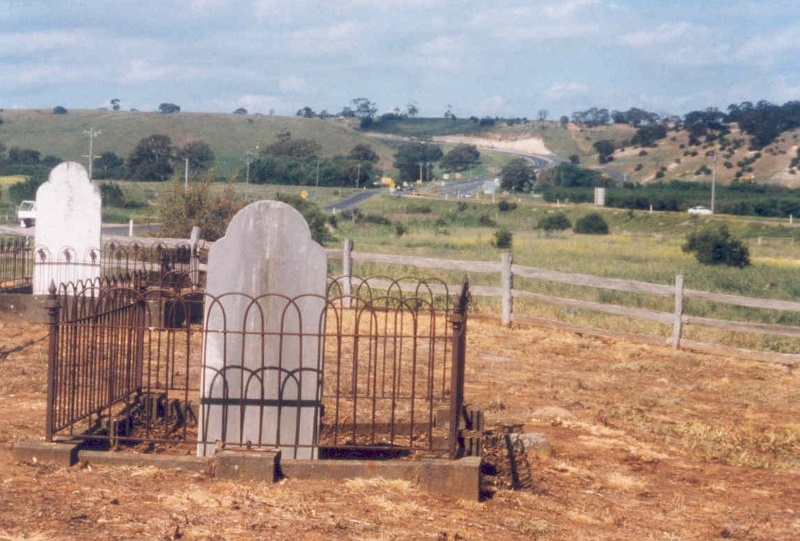 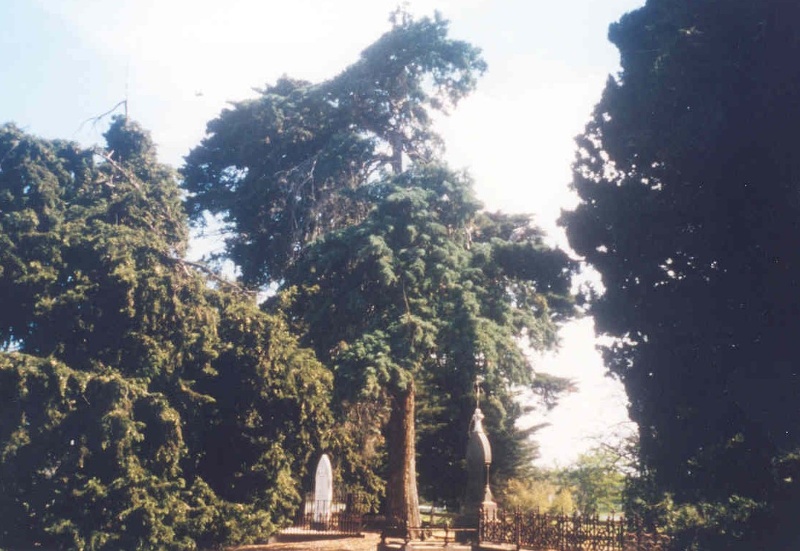 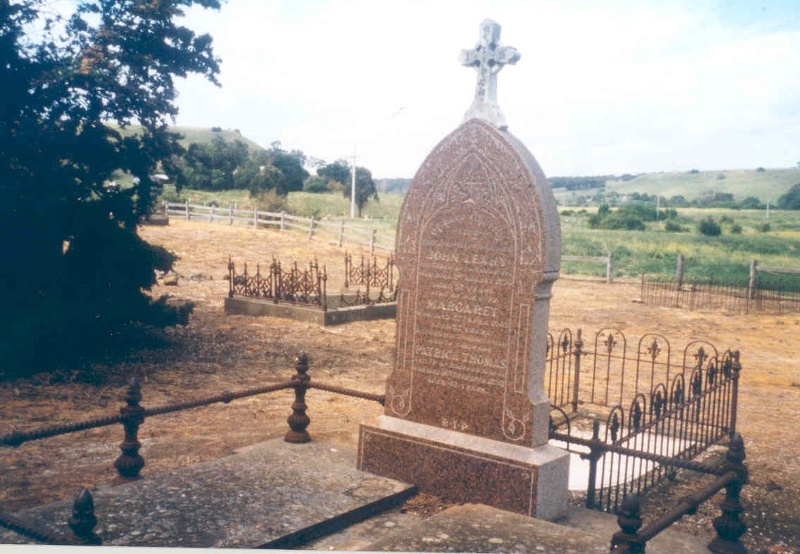 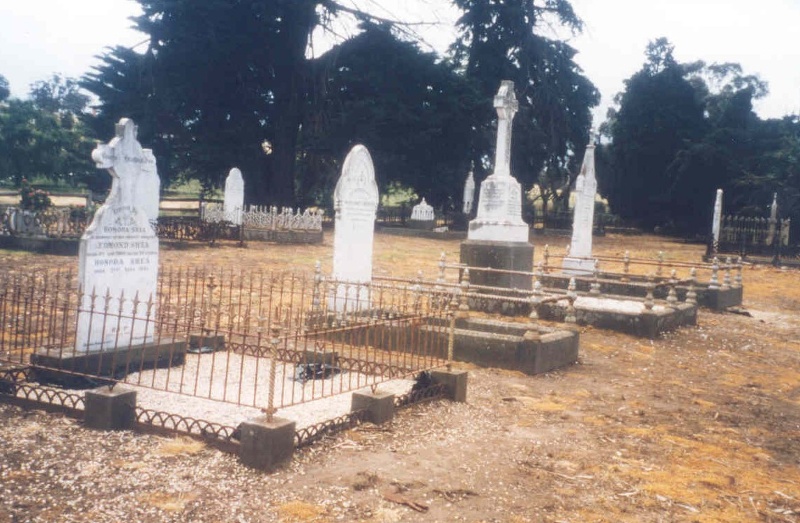 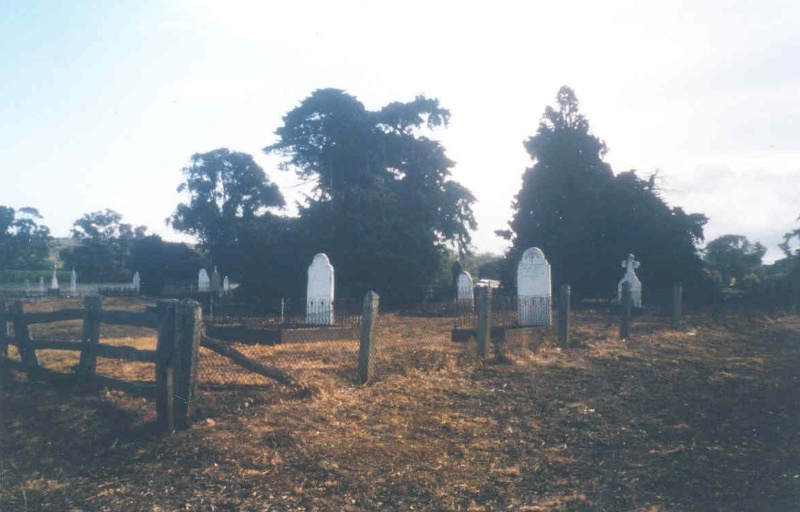 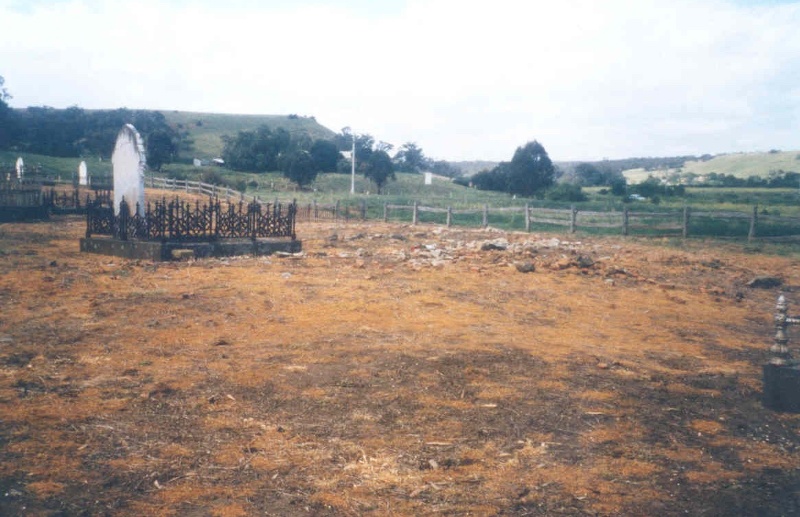 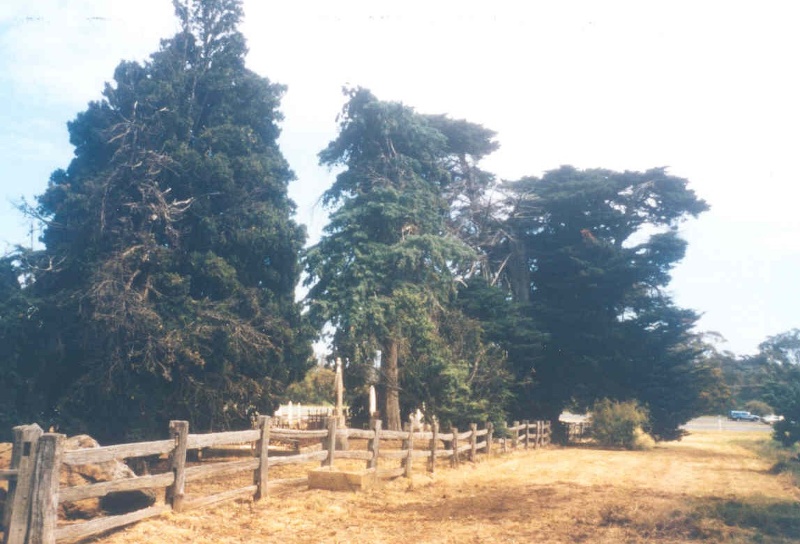 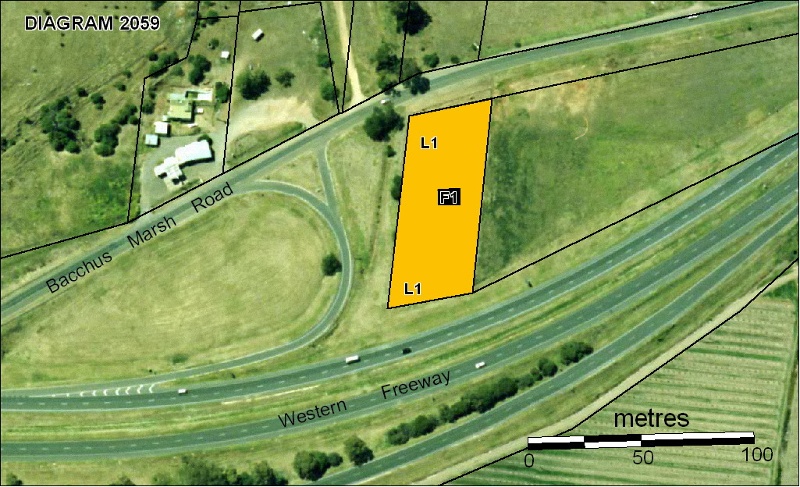 What is significant?
The Hopetoun Catholic Cemetery is situated in a rural setting approximately 4km to the east of Bacchus Marsh, at the foot of a slope overlooking the junction of the Werribee and Lerderderg Rivers. It is about 0.4 hectares in area, and situated within an irregularly-shaped four-sided block. The cemetery is fenced with a post-and-rail fence rebuilt in 2002-2003.

The site was established on land donated by Messrs Leahy, Egan and Egan in 1850, to the Roman Catholic Church for the erection of a chapel/school. The chapel known as the Church of St Laurence O'Toole was made of locally produced hand-made bricks, the foundation stone laid by Bishop Goold on October 16th, 1850. Used as both a house of worship and school by the Irish immigrants who settled the area it served first as the Hopetoun Catholic Denominational School (1851-1861), then later as Merrimu Common School No. 988 (1869-1874) finally closing in 1874. The building survived until c1876 and was then demolished. The chapel/school remains can be seen as stone footing and brick scatters that remain in situ in the centre in the cemetery.

The cemetery was closed in 1894 by the Board of Public Health as it did not adhere to the Cemeteries Act of 1890. it kept no records and had no Trustees. New Burial Rights were issued by the Board and burials continued at the cemetery until c1950. The layout of the burial plots is common for small cemeteries, best assigned as a crude axial grid. The Hopetoun Catholic Cemetery contains 23 legible headstones, relating to 58 burials, with family burial plots representing a visible feature of the cemetery. The earliest identifiable headstone in the cemetery dates to an 1854 burial, and all others date to the period 1870 to 1909. However, the inscriptions relate to burials from as early as April 1851 and many had later inscriptions added, up to 1941. There is evidence of many unmarked graves. Estimates of the total number of burials range from 150 to 250 persons. Most of the marked and unmarked graves are in the northern and central areas of the cemetery. All remaining monuments face east, except that of John Leahy, donor of the land, which faces west.

The Hopetoun Catholic Cemetery site features several maturecypress along the western side, English Hawthorn hedge remnants, a Blue Gum and seedling Tree Violet. Amongst the graves are 6 Italian Cypress. The site's value isincreased by its survival in its original rural context, its archaeological potential, its prominent position, and its relationship to other important heritage places, notably the adjacent residence of John Leahy (VHR 907).

How is it significant?
The Hopetoun Cemetery is of historical, archaeological and scientific (botanical) significance to the State of Victoria.

Why is it significant?
The Hopetoun Cemetery is historically important as the earliest known Catholic cemetery in rural Victoria. The Cemetery represents a complex and multi layered site and is important for the visible evidence it demonstrates of a pre-goldrush European settlement, particularly relating to the Irish farming community, reflected in the cemetery grounds and the ruins of the schoolhouse/chapel. The predominantly Irish names on the surviving headstones, and several inscriptions relating to Ireland, reflect the Irish-Catholic community that settled in the area, established the chapel/school and used the cemetery. The relative simplicity of the monuments and the unmarked graves reflect the working class origins and simple tastes of this hard-working farming community. Rural cemeteries like the Hopetoun of the pre-gold rush era are rare. Of the churchyard cemeteries in Victoria only Hopetoun's chapel, albeit now in ruinous condition is of the pre-goldrush period.The Hopetoun Catholic Cemetery tells of a community that had grown to a point where it required a school for its children, a chapel for its faithful, and a resting place for its dead.

The Hopetoun Catholic Cemetery is important for its archaeological potential to illuminate the pre-goldrush period settlement of regional Victoria. Hand-made brick and stone scatters relating to the construction of the chapel/school and the presence of metal, glass, and ceramic artefacts including fragments of writing slate demonstrate the site's archaeological value reflecting the range of different activities represented at the site. The site has the ability to illustrate our knowledge and understanding of the early Irish Catholic farming community which existed in the area as well as the conditions of this period.

The Hopetoun Catholic Cemetery is scientifically (botanical) important for the landscape values represented in the nineteenth century conifer plantings some of which are rare. The use of dark evergreen conifers is typical on nineteenth-century cemetery planting, and they were used for their symbolic associations. The dark evergreen foliage, narrow upright forms and the failure of pines and cypress to re-shoot from old wood are symbolic of everlasting life, reaching towards heaven, and death. The only flowering shrubs are four red roses growing on the 1890 Ryan grave. The rose cultivar is Rosa La Reine (1842 Laffay, France). It is multi-petalled, highly scented and appears to be of considerable age. The rare Mexican Blue Cypress (Cupressus lusitanica Glauca Pendula) is one of only three specimens of its type known in Victoria and the broad forms of Cupressus sempervirens are well developed and rare within the State.