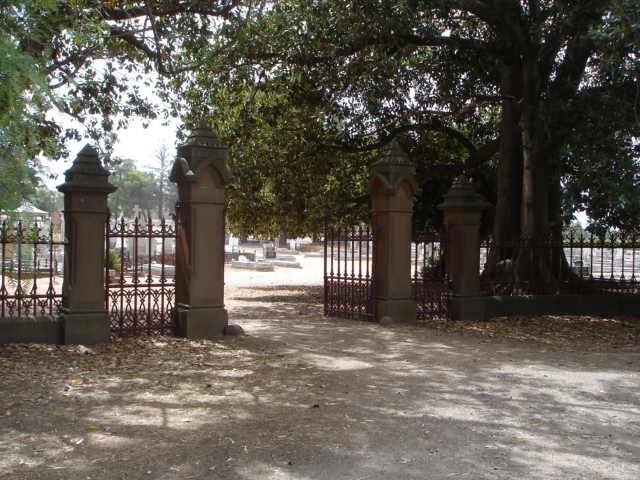 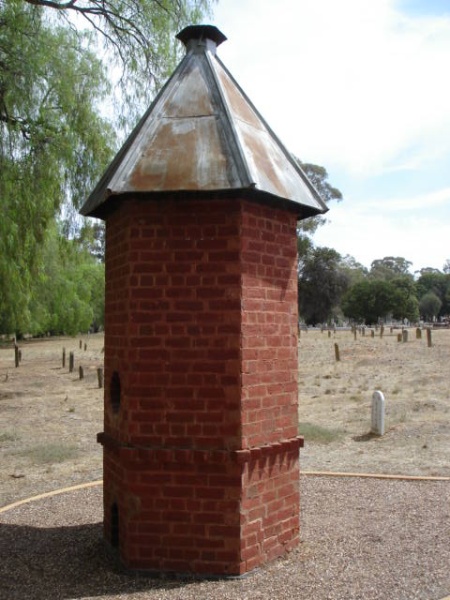 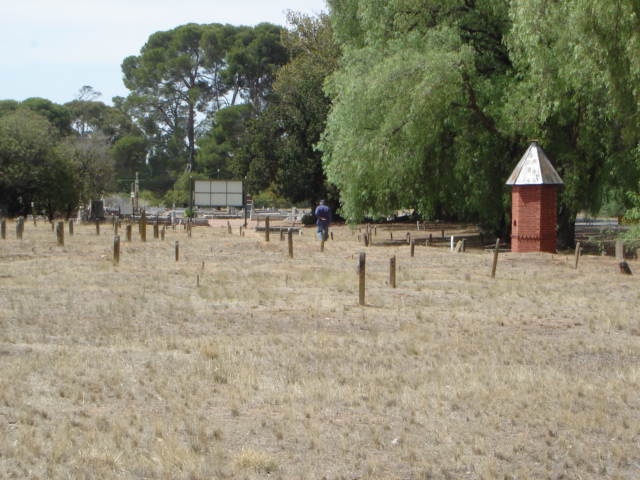 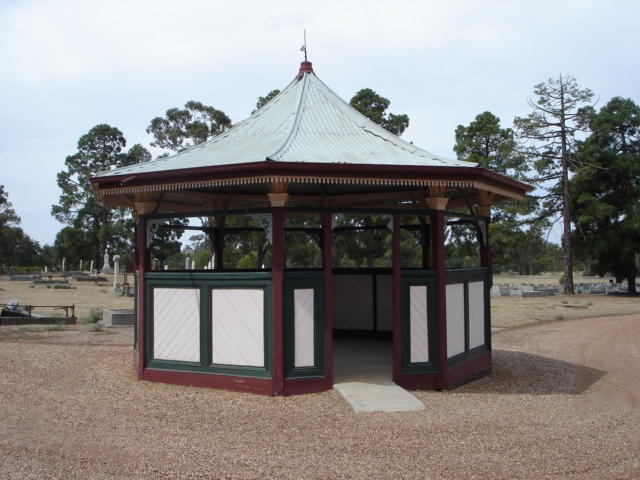 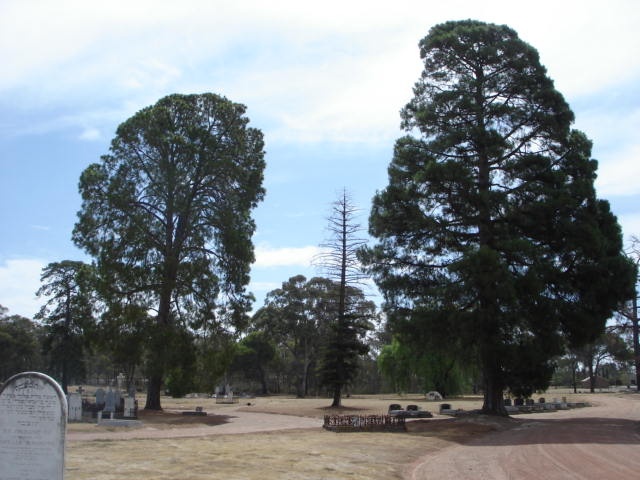 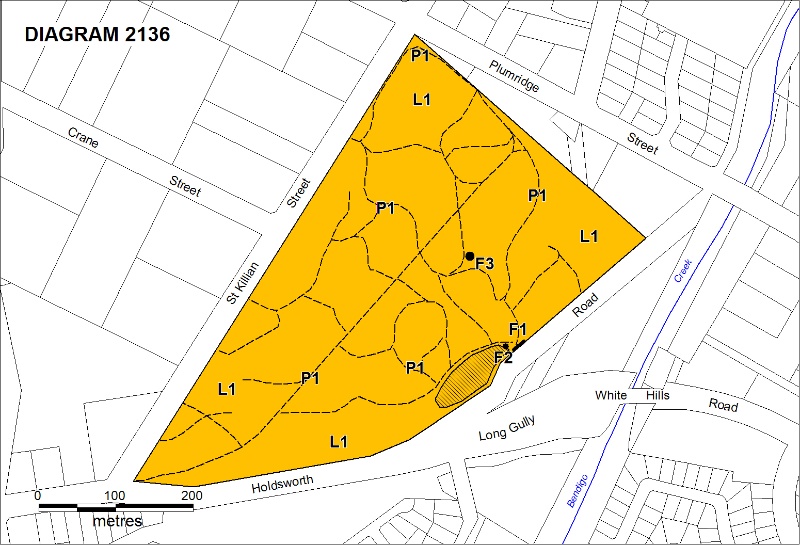 The earliest burials at White Hills Cemetery which was formerly known as Lower Bendigo Cemetery or Junction Cemetery, took place in November 1853 in an unconsecrated non-denominational burial ground close to the Bendigo Creek. The site of approximately 10 acres was shown on a government survey as 'burial ground' in 1854 and an undated layout plan of 'Cemetery Reserve Near The Mouth of Iron Gully' appears to show the same site. A later plan dated 1857 shows a much larger cemetery which allowed for further expansion to the south-west and north-west. The cemetery is roughly triangular and is bounded by Holdsworth Road, St Killian and Plumridge Streets, and slopes from the high point on St Killian Street down to lower land along Holdsworth Road.

The entrance to the cemetery was originally located at a point which is now deep within the grounds, and a sexton's cottage (demolished 1950s) was situated here. The cemetery was divided into denominational sections including Independents, Society of Friends, Wesleyan,Church of England, Presbyterians and Roman Catholics. The Chinese and 'Other Denominations' occupied the rear sections. The wide, triangular-shaped grounds were ornamentally laid out with a sinuous path system with individual loops, and the paths and brick gutters delineating the denominational boundaries of the cemetery. It is estimated that up to 1000 Chinese burials took place here, and about 260 footstones survive dating from1854. A brick hexagonal funeral tower built 1877-78 stands within the Chinese section. This funeral tower is still used by the Chinese Association at Ching Ming (sweeping of the graves around April 5th). The main entrance is from Holdsworth Road where the gates and cast iron and brick winged fences designed by Vahland in c1881 are erected. The cemetery features an octagonal rotunda built in 1898 and there are many fine headstones and monuments. The cemetery is planted with a variety of specimen trees including two Long-leaved Indian Pines, a large Canary Island Pine and an avenue of Canary Island Pines, Stone Pines, Aleppo Pines, a Monterey Pine avenue, Irish Strawberry Tree and a Phillyrea latifolia. The eastern boundary is screened by a row of Pepper Trees and framing the main entrance are a pair of very large Moreton Bay Figs and next to these a pair of Carob trees. To the north and south the boundaries are more open and permit long views into the cemetery, and the western side retains remnant bushland, including a few fine Eucalyptus tricarpa (Ironwood) trees.

The White Hills Cemetery is of historical, aesthetic, scientific (botanical), and architectural importance to the State of Victoria.

White Hills Cemetery is historically significant as a substantially intact example of a mid nineteenth century goldfields cemetery. The cemetery has associations with Victoria's rich goldfields from 1853, particularly with Bendigo and the gold diggings to the north of the city. The cemetery has significance for its links with Chinese migration to Victoria in the 1850s and the presence of the Chinese on the Bendigo goldfields which is demonstrated by the large number of burials. The cemetery holds the largest number of footstones in Victoria and a rare 1877-78 funerary tower. The cemetery graves are important for the information they provide about burial customs and patterns of deaths in the colony.

White Hills Cemetery is aesthetically important as an early example in Victoria of a cemetery influenced by Romantic and Picturesque ideals which gained worldwide popularity in the early to mid nineteenth century, which are demonstrated in the layout and design with straight and broad sweeping roads framed by trees enclosing denominational compartments, brick lined gutters, and focal architectural features, tree, shrub and bulb plantings in the large triangular site. The aesthetic quality of the cemetery is further derived from the undulating landscape, avenues and specimen trees, remnant bushland and the vistas within the site.

White Hills Cemetery is architecturally important for its collection of structures which include representative examples of typical nineteenth century cemetery features such as entrance gates and fence designed by Bendigo architect W C Vahland in 1881, a 1898 rotunda, and headstones. The funerary burner reflects Chinese religious customs and building traditions practised in the colony, and is an outstanding example of a rare building type. The cemetery memorials, headstones, footstones and funerary art are collectively important for their design characteristics and craftsmanship.