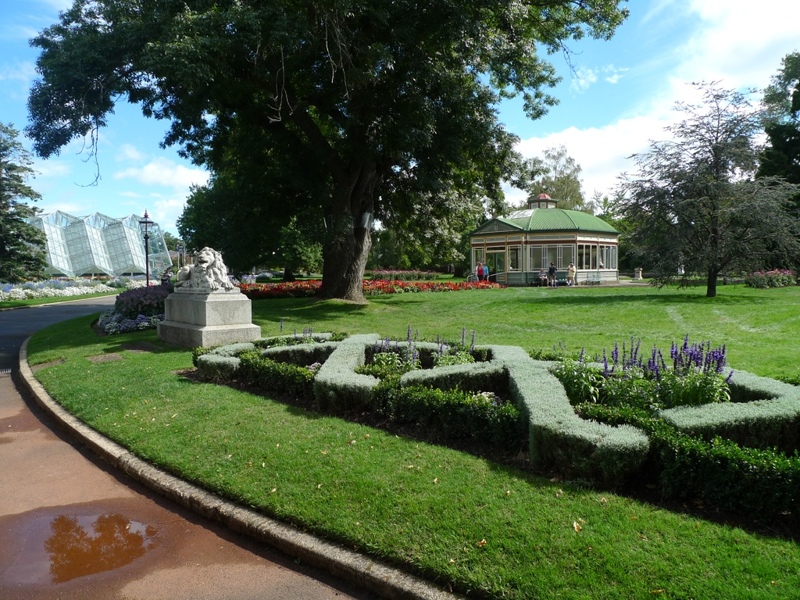 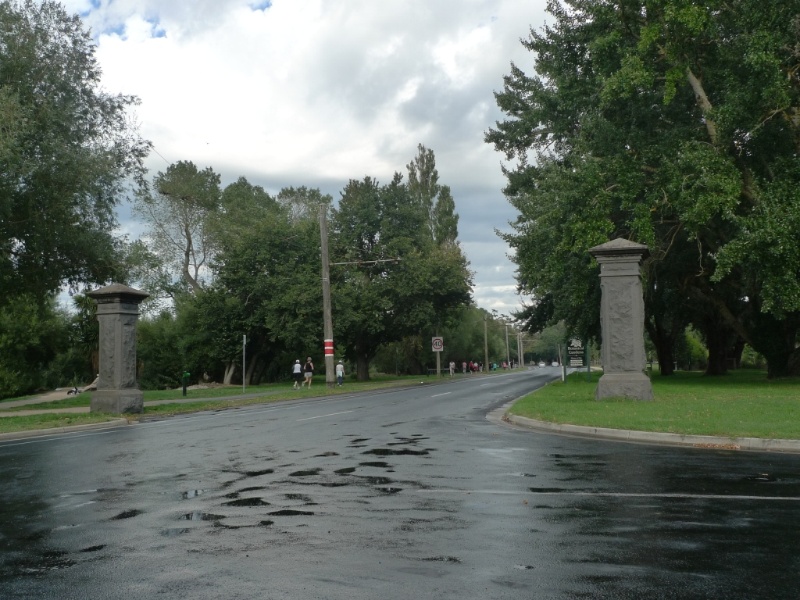 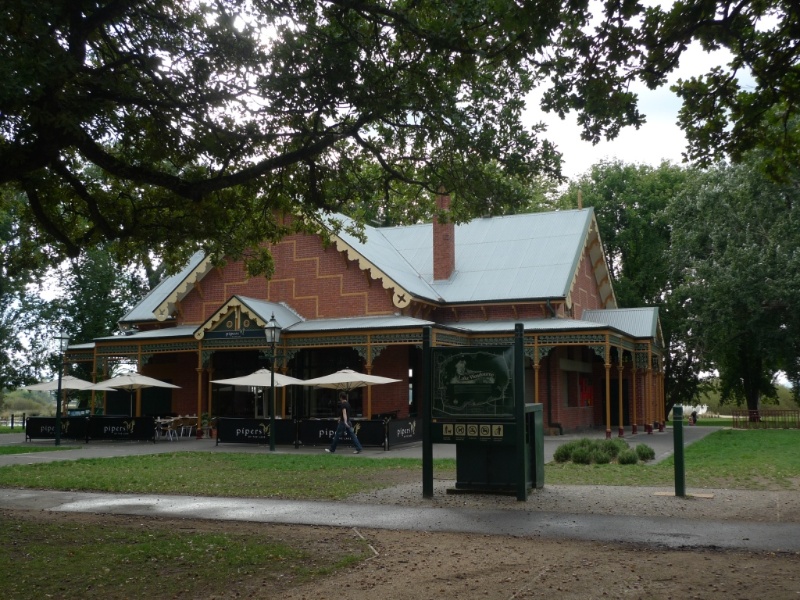 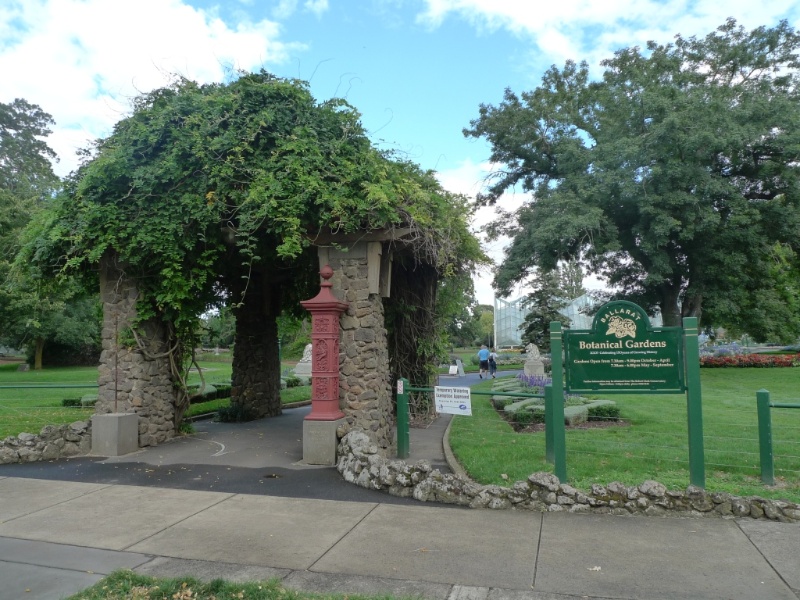 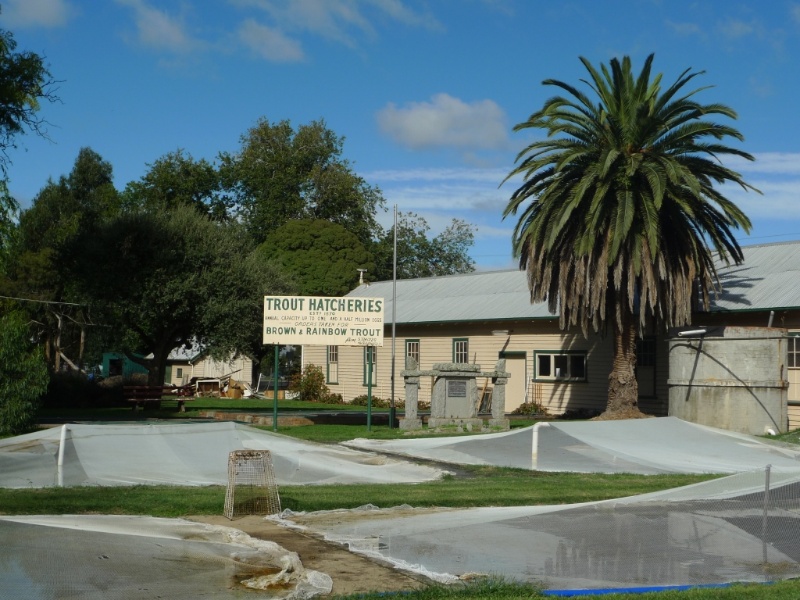 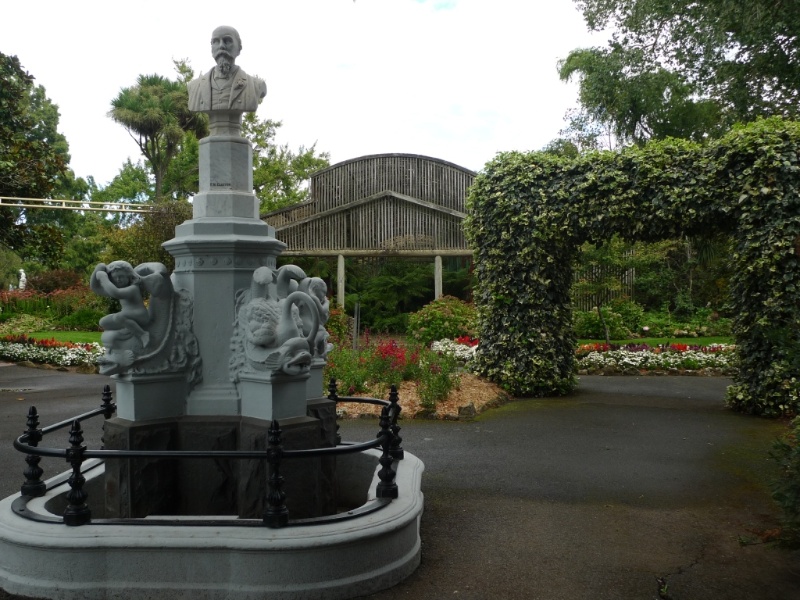 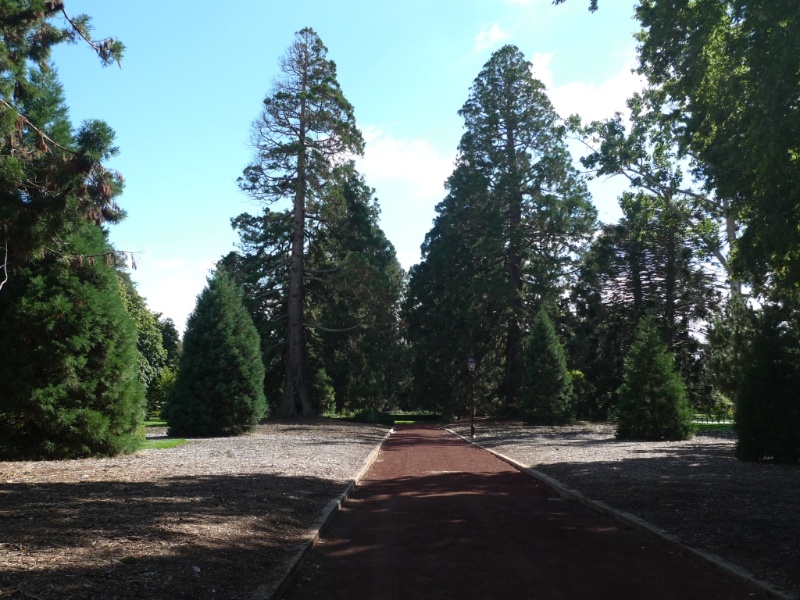 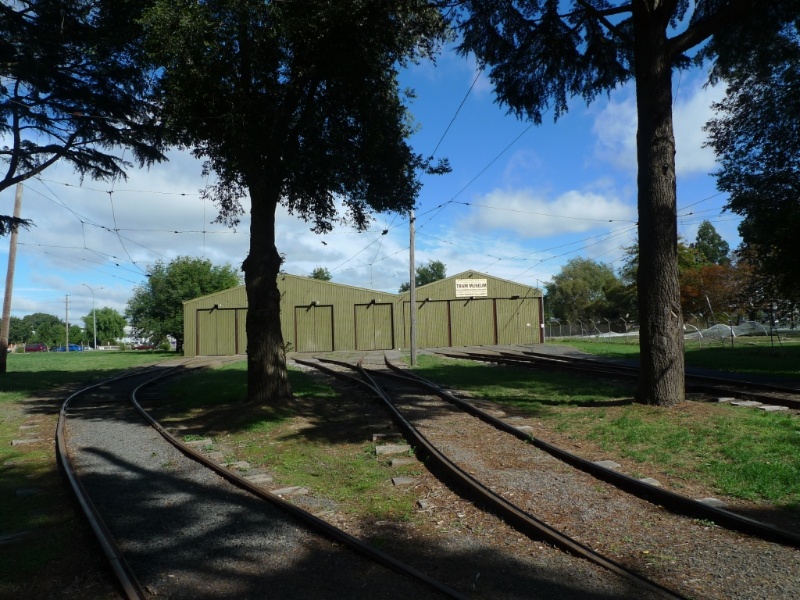 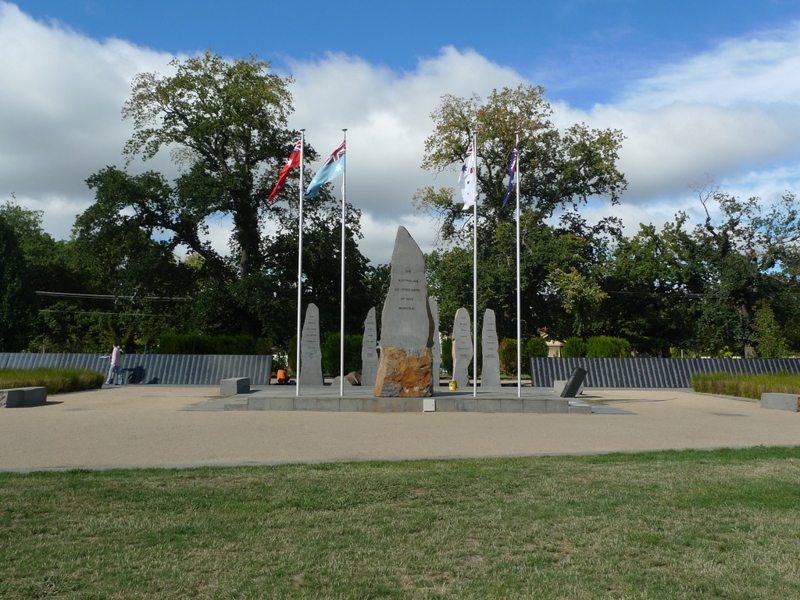 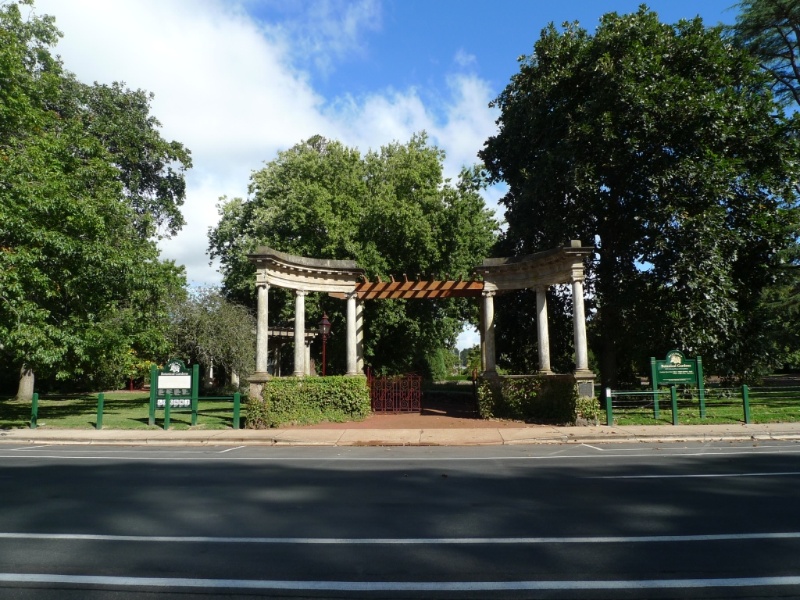 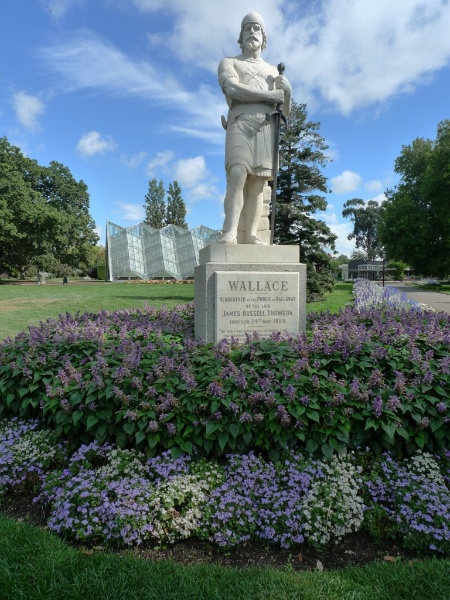 The Ballarat Botanical Gardens, gazetted in 1857 and developed from 1858 on the old Police paddock site, is an outstanding example of a botanical garden. The large 40 hectare site is bounded by Lake Wendouree (originally Yuille's Swamp) to the east, the northern extension of St Aiden's Drive, The Boulevarde, Gregory Street, Gillies Street and Carlton Street along the south. Although the area between Wendouree Parade and the lake is considered to be part of the lake surrounds, this section is integral to the gardens and was included in the original 1885 reservation. This site is part of the traditional land of the Wathaurung people now known as the Wadawurrung..

In 1858 a design competition was won by Messrs Wright and Armstrong and the inaugural curator, George Longley, was appointed to implement the planswith early plant materials supplied by Baron von Mueller from the Melbourne Botanic Gardens and by Daniel Bunce from the Geelong Botanic Gardens. The main entrance on Wendouree Parade features the ornate cast ironwork Morey gates (1894) with timber pergola (1934) and two marble lions (c1894) either side of the path leading to the statue of Scottish hero Sir William Wallace (1888). The south-eastern McDonald gates (1921) feature a semi-circular form and ionic colonnade.

The site is divided into three distinct sections: the central botanic gardens and two areas of open parkland known as the north and south gardens with a pair of remnant bluestone gateposts marking the original entrances at either end of Wendouree Parade. The strong linear design of the central garden features four main north-south axes: Wendouree Parade, the Giant Redwood Avenue (Sequoiadendron gianteum) planted 1863-1874, the avenue of Horse Chestnuts (Aesculus hippocastanum) accommodating the Prime Ministers' Avenue (1940 -present) and a path along the western boundary.

By 1862 the first maze was built, but later removed, close to the site of the first fernery (1887), which after several alterations and additions, is still an outstanding feature of the gardens and enhanced by an adjacent water lily pond (1916). With the donation in 1884 by local stockbroker Thomas Stoddart of twelve Italian marble statues located throughout the gardens, and the construction in 1887 of the Statuary Pavilion to house the 'Flight from Pompeii' and four accompanying statues donated by James Thompson, the Botanical Gardens became a centrepiece of civic pride for Ballarat. From 1889 tuberose begonias were introduced into displays, beginning a tradition highlighted by the annual begonia festival from 1953 until the present.

Developments catering for increasing tourism adjacent to the lake shore included the Lake Lodge (1891) for refreshments, adjacent cannons, Almeida Pavilion (1907) housing amusement machines and shelters such as the Picnic shelter (c1910) and replacement bandstand (1921). 'Fairyland' a wooded grove with bridges, ponds and walks on the western shore of Lake Wendouree, became a popular feature and a zoological section (1915-1959), replacing an earlier menagerie, was established in the northern gardens with the Adam Lindsay Gordon Cottage relocated nearby in 1934. Large and small bequests continued to enhance the gardens in the twentieth century such as the sundial (1912), avenue of Prime Ministers' busts (1940- ), and the Robert Clark Conservatory and Horticultural Centre (1995). The Ballarat Botanical Gardens retain an exceptional collection of conifer and exotic deciduous trees and a tradition of bedding and floral displays, a fernery and potted plants.

Other additions to the northern gardens included a Pavilion (1904), Sound Shell (1962), and a Wetland (2001). The boundary between the southern gardens and the main botanical gardens is marked by the old display glass house (1972), the Ballarat Fish Acclimatisation Society's trout hatchery (1873) and the Ballarat Vintage Tramway Museum. The extensive Australian Ex-Prisoner of War Memorial to honour 35,000 soldiers was constructed in 2004 adjacent to Carlton Street.

Ballarat Botanical Gardens are of historical, scientific, aesthetic, and social significance to the state of Victoria.

The Ballarat Botanical Gardens are of historical significance as one of the best examples of a botanic garden in Victoria. Developed from 1858, they retain typical characteristics of the nineteenth century gardenesque style such as a remnant path layout, open lawn areas planted with mature specimen trees, formal avenues, bedding displays, horticultural buildings such as the fernery and conservatory, embellishments such as garden buildings, Lake Lodge, picnic shelters, fountains and statues, and a location in proximity to a township developed during the mid-nineteenth century.

The Ballarat Botanical Gardens are of historical significance for the association with Baron von Mueller who supplied initial plant materials from the Melbourne Botanic Gardens.

The Ballarat Botanical Gardens are of historical significance for the 1887 octagonal Statuary Pavilion, designed by local architect T.E. Molloy, one of the oldest surviving structures in the gardens. Featuring a segmented domed roof with top-lit central lantern, it continues to house the 'Flight from Pompeii' statue and four other statues.

The Ballarat Botanical Gardens are of scientific significance for the close link with the acclimatisation and zoological gardens movement demonstrated by the earlier menagerie and zoo sections, of which remnant cages remain, and the continuous activities since 1873 of the Ballarat Fish Acclimatisation Society, the oldest in Victoria.

The Ballarat Botanical Gardens are of aesthetic significance for the mature avenues which enhance the linear layout of the gardens, particularly the Giant Redwood (Sequoiadendron giganteum), the Horse Chestnut (Aesculus hippocastanum) and English Oak (Quercus robur) avenues.

The extensive collection of statues is also of aesthetic significance as they are a major feature and focal point in the design of the gardens set among colourful bedding displays. These include the five within the Statuary Pavilion, the twelve statues in the Stoddart collection scattered around the gardens, the twenty-six busts along Prime Ministers' Walk and several other single statues such as Sir William Wallace close to the main entrance gates.

The Ballarat Botanical Gardens are of aesthetic significance for the setting adjacent to Lake Wendouree and the relatively open areas to the north and south which act as a buffer to the central area of the gardens. This setting also provides contributory views from, and vistas within the gardens, as well as making a significant contribution to the broader Lake Wendouree landscape.

The Ballarat Botanical Gardens are of social significance as one of Victoria's best known and most visited regional botanic gardens, enhanced by events such as the Begonia Festival (since 1953). The location adjacent to Lake Wendouree provides a strong recreational link with the surrounding foreshore areas and, since the 1870s, has been a popular place for leisure activities for locals and visitors.

The Ballarat Botanical Gardens are of social significance as a reflection of the civic pride and prosperity of Ballarat, originally derived from the gold rush, particularly expressed through bequests such the Stoddart bequest (twelve sculptures), the Thompson bequest (statuary Pavilion and five statues), McDonald bequest, (bandstand, entrance gates and pergola) and the Robert Clark Conservatory and Horticultural Centre.