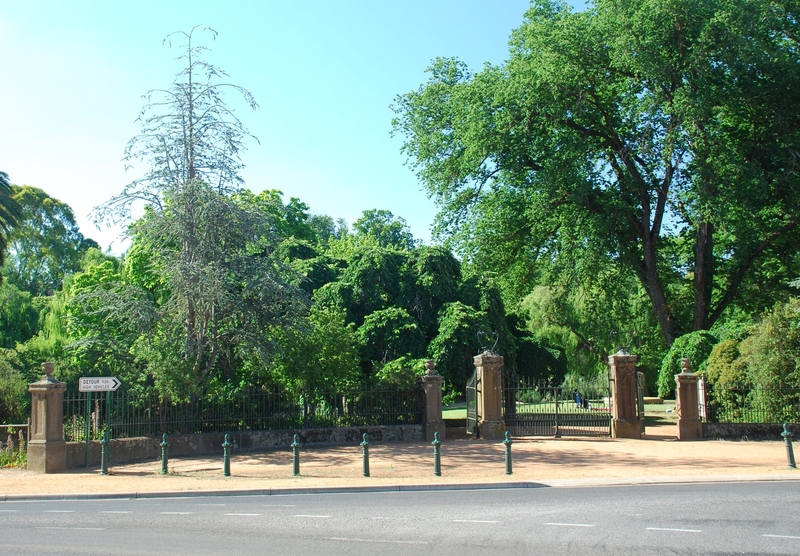 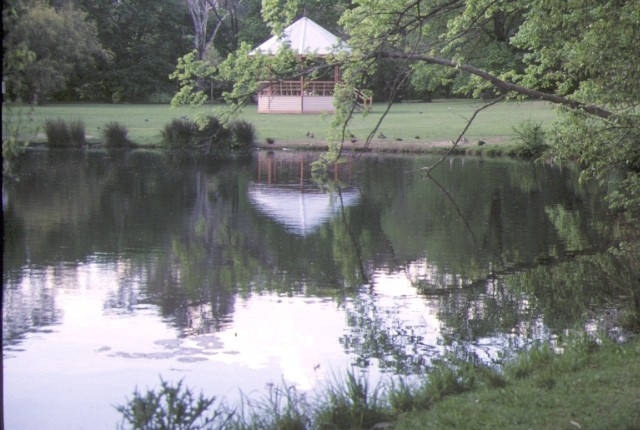 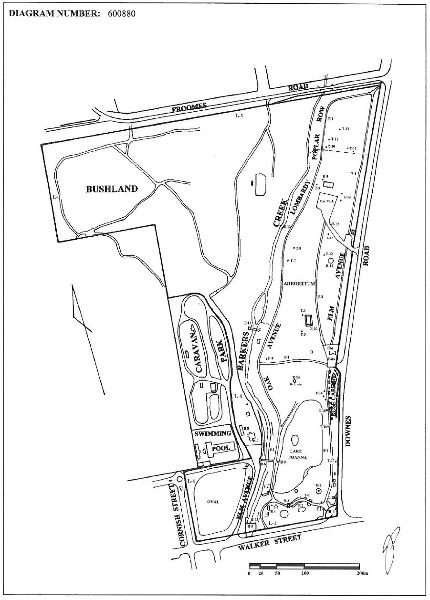 The Castlemaine Botanic Gardens were gazetted on 21 February 1860 and is believed to be laid out by the first curator Phillip Doran (1830-1913) who occupied this position for 47 years. Doran was previously an apprentice to Joseph Paxton at 'Chatsworth', Derbyshire, England. Ferdinand Mueller, Government Botanist provided many hundreds of plants for the gardens as did Daniel Bunce curator of the Geelong Botanic Gardens. The gardens are entered through an impressive set of cast iron gates erected in 1877-78 by local engineering firm Thompson & Co and completed by local monumental mason George Redfearn. At the same time a decorative fountain was erected near the gates, and a year later Lake Joanna with its naturalistic island was officially completed. Beautification works continued; in 1884 a second lake, Lake Augusta was constructed, and in the 1890s a rustic bridge, conservatory, fernery, shelter shed, rotunda (designed by Angus Cornish), and grotto were added, bringing the gardens to their peak of development. Doran remained curator until he died on 29 September 1913. After Doran a number of changes occurred to the gardens; the tearooms (1919) (now pipe band hall), and glasshouses (1920; replaced 1960) were added. However, Lake Augusta was drained and converted to an oval in the 1930s, the summerhouse, bridges, ferns and grotto disappeared by mid-century, and the rotunda by the 1970s. A portion of the gardens were set aside for a caravan park and swimming pool in the 1940s, and two further portions were annexed by the Alexander Hospital in the 1950s and 1960s.

The Castlemaine Botanic Gardens are of historical, scientific, social and aesthetic significance to Victoria.

The Gardens are historically important as one of Victoria's oldest regional botanic gardens. The scale of these major gardens and degree of plant specialisation reflect Castlemaine's gold rush prosperity and the local community's desire to draw attention to their success and accomplishments. The gardens have further historical significance for their long association with inaugural curator Phillip Doran who enabled the gardens to develop under the continuity of his vision. An English Oak planted on the 26 May 1863 is of historic significance for being amongst a small number of similar plantings and the oldest commemorative plantings in Victoria.

The Gardens are of aesthetic importance as an outstanding example of a regional botanic garden created in colonial Victoria. Typical characteristics of a nineteenth century garden which are demonstrated at Castlemaine include; the formal entry having gates and monumental pillars, carriage drive, the informal park layout, Lake Joanna and other water features, such as the fountain and weir, decorative structures, especially the entrance gates, and areas of intense horticultural interest that contrast with open lawns planted with specimen trees. The gardens have further importance for their picturesque, nineteenth century design and layout, which continues to be reflected in the informal arboretum, the surviving path system, elm and oak avenues, and in the placement of major features.

The Gardens have scientific significance for their collection of plants, particularly trees and shrubs and the Buddleja collection. Many of these specimens are characteristic of late nineteenth century gardens and are representative of the more specialised scientific role of a botanic garden. The gardens have an outstanding collection of mature trees, including a preponderance of conifers, many of which are rare in cultivation and the finest of their species in Victoria. Such trees include, Ulmus glabra 'Camperdownii', Ulmus minor 'Sarniensis', Quercus canariensis x Q. robur, Quercus macrocarpa var. oliviformis (removed 2010), Quercus robur, Tilia platyphyllos, Pinus ponderosa, Pinus sabiniana, Pinus torreyana, Platanus orientalis, Catalpa bignonioides, Eucalyptus longifolia, Schinus polygamus var. ovatus, Myrica faya and Pinus pinea. The Acacia farnesiana and Rhus undulata are the only examples in Victoria and Pittosporum sahnianum is a new introduction.

The Gardens is socially significant because of its long association with the citizens of Victoria, and its use for picnicking, family reunions, and social events. The community continue to use the Gardens and is a major venue for the Castlemaine Arts Festival, and music activities, including Thompson's Foundry Band. The Gardens are highly valued for their landscape and horticultural education.