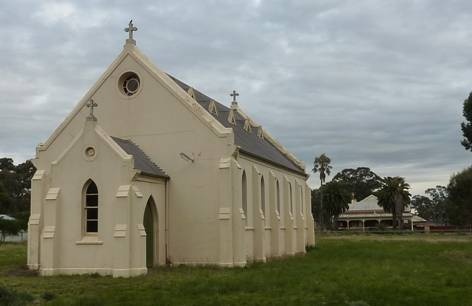 East elevation of St Patrick's, with presbytery visible at rear. 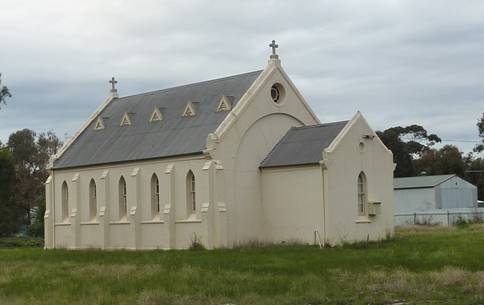 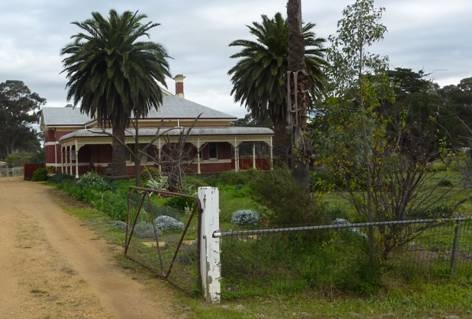 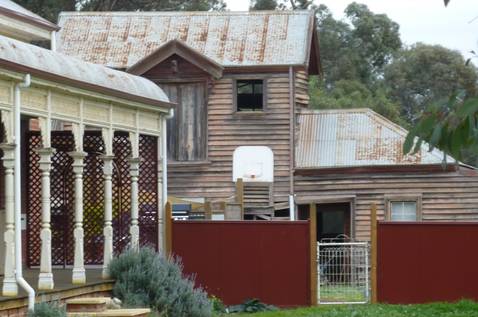 St Patrick's Catholic Church (1877) is located on a deep, broad site running east-west between Cathcart and High streets, Marong. It is a small Gothic Revival stuccoed church with a gabled roof, porch to the east end and a sanctuary and vestry to the west end. There is a cross at the top of each gable end, and another over the porch; windows and doorways are lancet arched and the gable ends have oculus windows and motifs. The nave has five bays, expressed externally by two-step side buttresses, and gablet roof vents. The nave corners each have angled buttresses intersecting just below the gable kneelers. A corbelled effect is gained from stubby cyma recta moulds jutting out between the upper buttress insets and the kneeler elevations. The nave, porch and vestry windows are all original timber-framed double-hung sashes of similar size. The substantial church grounds are not formally landscaped.

The presbytery (1905), set back from Cathcart Street behind generous garden with mature palm trees and vestiges of an early garden layout, is a Federation design with a symmetrical gable-hip roof clad in corrugated galvanised steel, with boxed eaves, bracketed on each side by gabled wings, which also frame the return verandah. The latter is bull-nosed and timber-posted with a timber frieze rail supporting a cast iron lace infill and cast iron lace fans. The walls are white tuckpointed red brick with cement-rendered courses at window sill height. There are symmetrical window bays and half timbering to the gable ends. A trailing wing projects from the south-east of the house, terminated by a chimney similar to those in the main house. The majority of the windows sit at the rendered course line and are double-hung timber sashes with clear panes.

The timber framed stables (presumed to date to 1905) at the rear of the site comprise a central three stall stables with loft, carriage room to the south and two roomed quarters, kitchen, laundry and shower alcove to the north. Inside, the mangers, stalls and brick pavement remain. The loading doorway to the loft retains its surmounting beam and gables with decorative brackets. The walls are clad in weatherboard, and the roof is clad in corrugated galvanised steel.

St Patrick's Catholic Church (1877), presbytery and stables (1905) are of local historical and aesthetic/architectural significance. The church is also of local social significance.

St Patrick's Catholic Church (1877) and the presbytery and stables (built 1905) are historically significant (Criterion A). The Catholic faith was well represented in the Marong area by the 1870s, and is presumed to reflect the presence of Irish settlers in the district. The Catholic Church is also an expression of the development of Marong from the 1860s to the 1880s. The presbytery (built in 1905) is significant for its association with both the church and the formation of the Marong Parish following the First Diocesan Synod of December 1901. It provides evidence of the living conditions of the parish priest and, through its substantial size, fine detailing and execution, reflects on the apparent affluence of the parish in this period. Reverend Father J O'Carroll, the first parish priest to take up residence, was well liked and long serving; he is buried at Marong. The stables also contribute to the former ecclesiastical complex, and through their scale and the facilities provided (for a stable hand) again reflect on the relative affluence of the church. Collectively, the church, presbytery and stables demonstrate the evolution of Catholic parish facilities in Marong from the 1870s to the early twentieth century. St Patrick's Catholic Church is also of social significance as the focus of Catholic worship and the parish community of Marong, since 1877, and is valued locally as an expression of the importance of the faith and its ongoing presence in the community (Criterion G). The church is additionally associated with Bendigo architect Joseph M Brady who, in partnership with the mining engineer Robert Moffat, ran a successful practice in the Bendigo region (Criterion H). The architect was involved in a number of local developments including Dunedin House in Kangaroo Flat; the Crusoe waterworks near Kangaroo Flat; the 'Bendigo Independent' offices in Bendigo; and the former 'Golden Eagle' flour mill in Bendigo. Brady's involvement in St Patrick's Church may have come about through his reputed position as the Sandhurst Diocesan architect for the Catholic Church, where he was also involved in designing the former Bishop's Palace in McCrae Street.

St Patrick's Catholic Church is of local aesthetic/architectural significance as an example of a small Gothic Revival stuccoed church of the 1870s. It is largely intact as designed, having never been extended or substantially modified. Details of interest include the asymmetrically placed sanctuary and vestry of the church; the spur cyma recta moulds between the buttresses; and the gable kneelers. The church is prominent in its context by virtue of its location in a large and informal open landscape, with unimpeded views from Cathcart and High streets. The presbytery is also of aesthetic/architectural significance as an imposing Federation period dwelling with a handsome verandah, albeit relatively conservative in design. Modifications to the building have generally been concentrated to the rear, allowing the property to present as originally designed in its garden setback, which retains vestiges of its early layout. The c.1905 timber stables are also significant as a rare example of a virtually unaltered stables building (Criterion B). The survival of the stables in association with a church and presbytery, including a stables of this size, is additionally a rare surviving combination. For the church building, the spur cyma recta moulds between the buttresses and the gable kneelers also occur very rarely in Victoria, if at all.