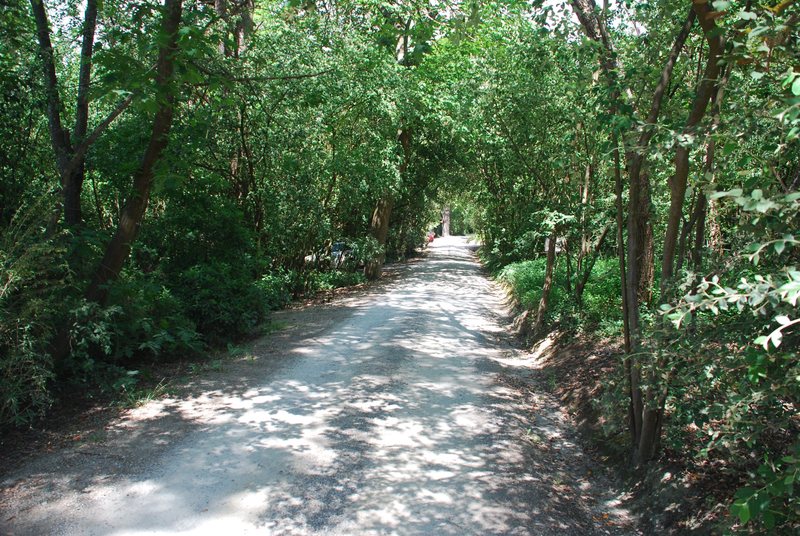 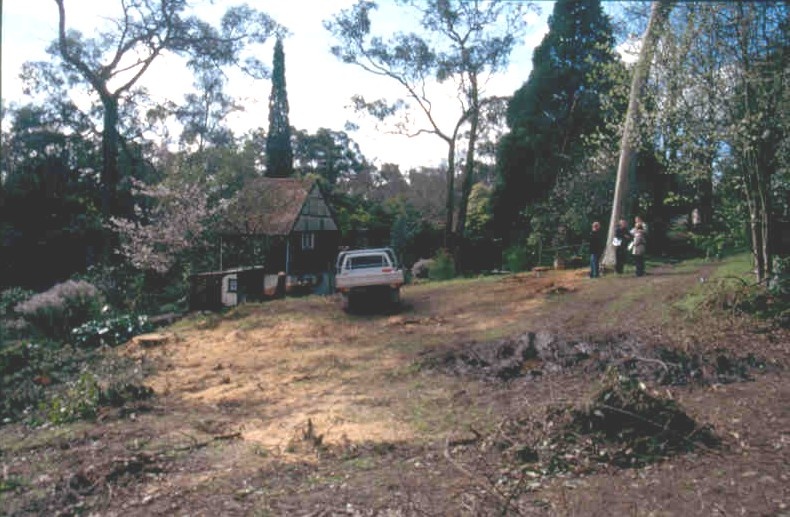 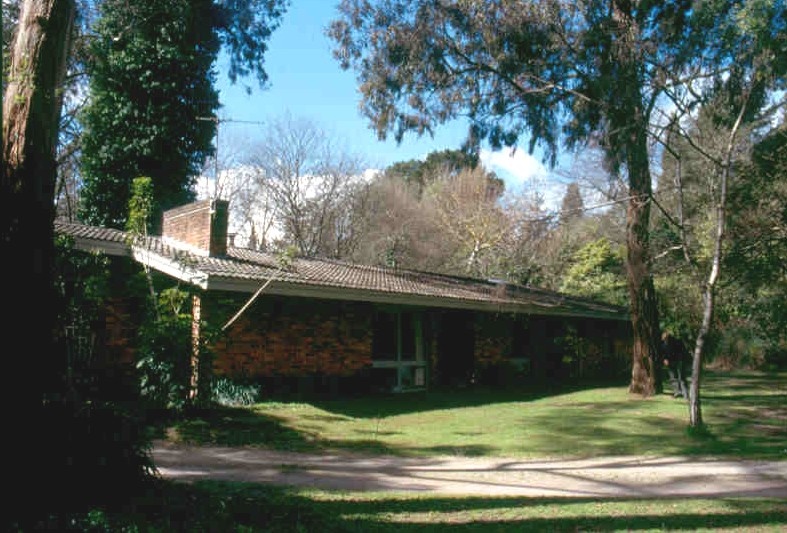 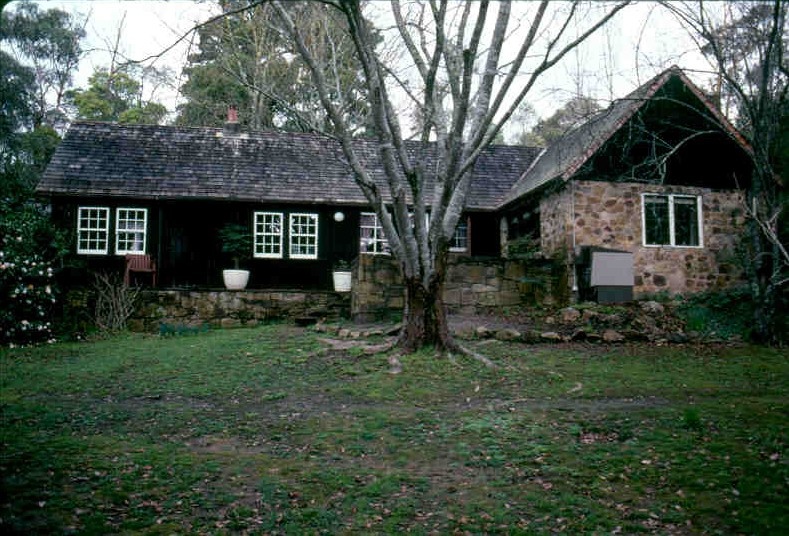 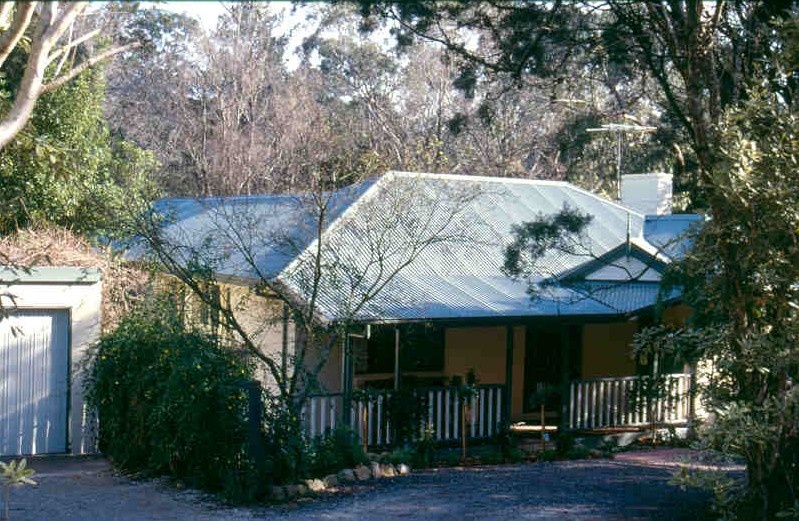 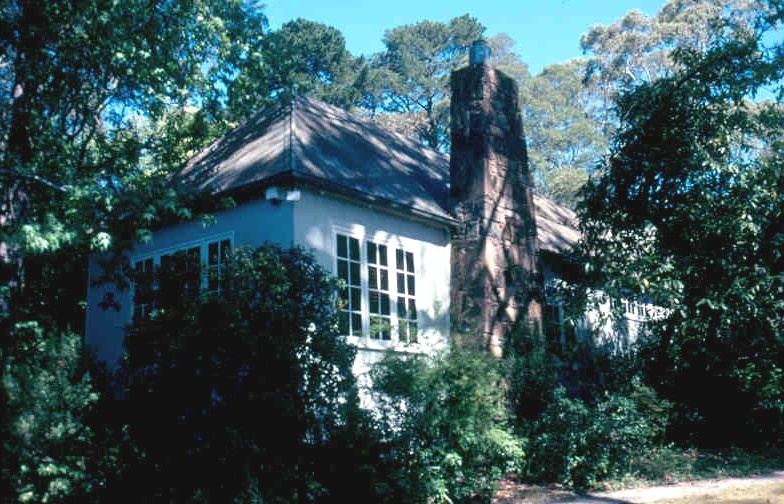 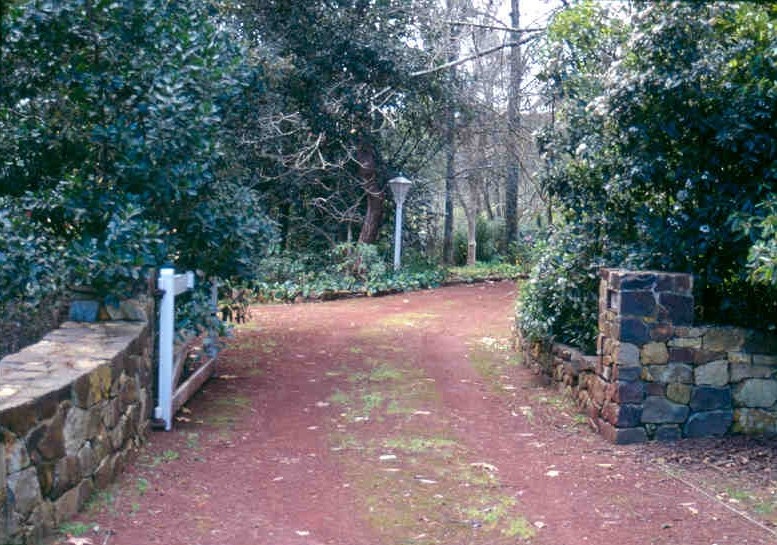 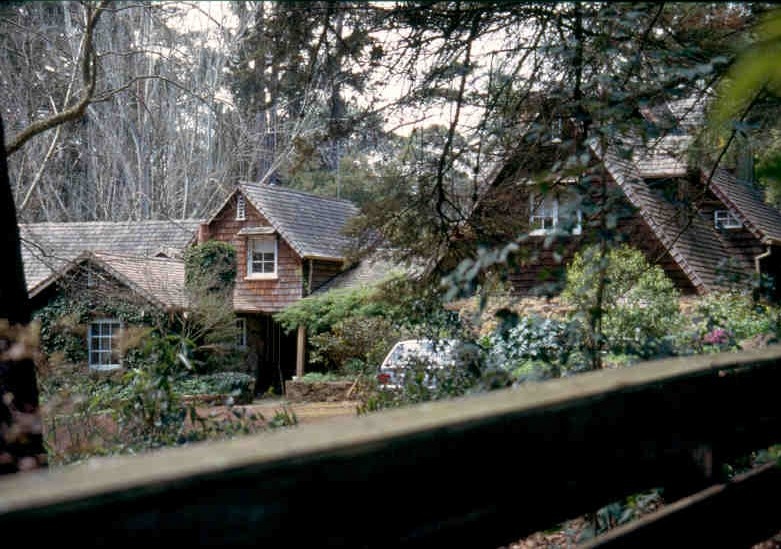 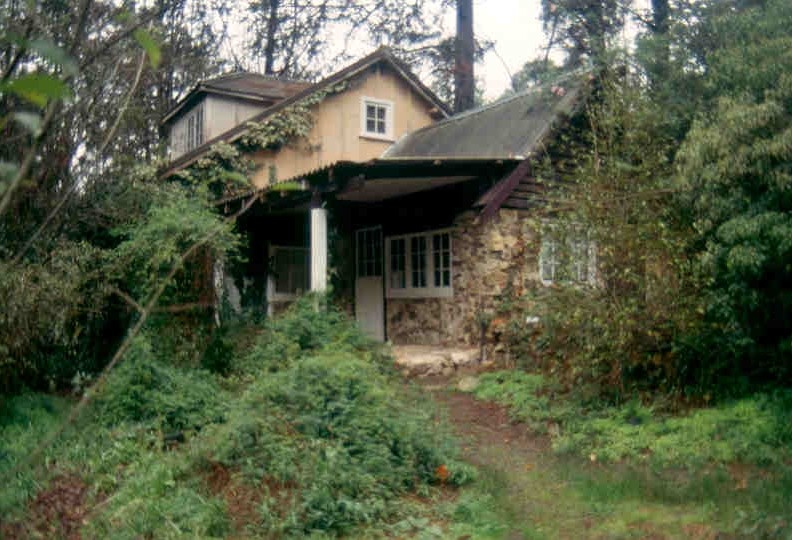 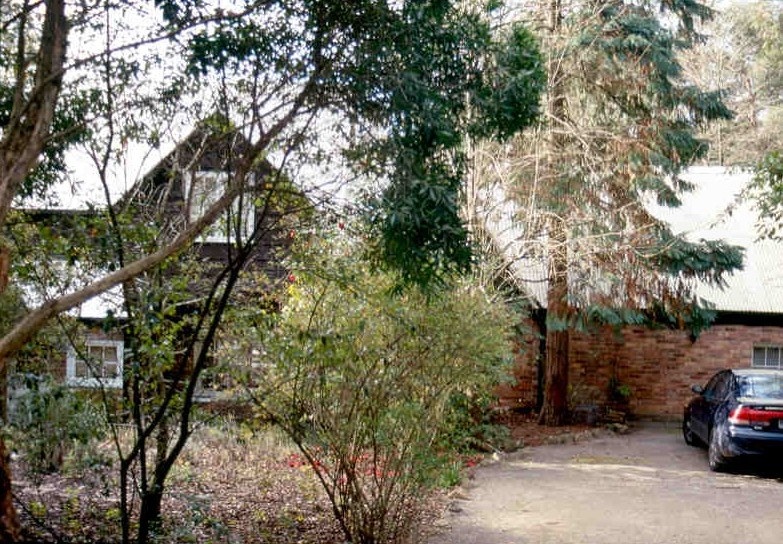 What is significant?
Bickleigh Vale is a landscaped village of approximately 10ha created in the 1920s by leading Australian landscape gardener and designer Edna Walling (1895-1973). Bickleigh Vale was developed around Walling's own residence, 'Sonning' built in 1921 and her studio 'The Cabin'. Walling lived in the village for most of her working life, moving from 'Sonning' to 'The Barn' in 1951, before moving to Queensland in 1967. Bickleigh Vale was named after the village in Devon, England where Walling was raised.

The village was developed from the 1920s in a consistent style by Walling and a group of likeminded purchasers until the 1950s, whilst subsequent subdivision has created more than 30 properties. The design of all allotments in the first few decades was closely controlled by Walling, and part of the 'Sonning' garden was used by Walling as a nursery from which plants were supplied to purchasers. Many of Victoria's most influential landscape designers including Eric Hammond, Ellis Stones and Glen Wilson gained experience working in the village.

The landscape character is of densely planted trees and shrubs across the gently undulating topography into which cottages and roads have been constructed. The mature enclosed landscape allows only glimpses of the cottages and houses behind the plantings and sloping land. The planting is diverse and includes old remnant gums, and introduced evergreen trees and shrubs that provide contrasts of leaf and flower colour, and form and texture throughout the seasons. The landscape design includes stone walls, steps, ponds, arbours, flagstones and gravel drives, and richly planted gardens. Low front fences of timber, stone or wire occur, and some properties have place names fixed to gates or fences. An important feature of the village is the use of wire fences covered in shrubs and climbers to provide a continuous uninterrupted landscape amongst the cottages and houses.

The houses and outbuildings that were designed or approved by Edna Walling in what she termed 'the English style' include her own home 'Sonning' which was rebuilt in 1936 following the destruction of 'Sonning I' in a fire, 'The Cabin' (now 'Sarn'), 'Lynton Lee', 'Cornerways', 'Mistover', 'The Barn', 'Downderry', 'Hurst', 'The Sheilan', 'Glencairn', cottage at 11 Bickleigh Vale Road, 'Badgers Wood', 'Wimborne', 'Braemark', guest cottage and workshop at 138 Cardigan Road (formerly part of 'Braemark'), 'Winty' and 'Bena Lodge'. All have a harmonious combination of design elements such as rustic stone on lower levels, dark stained shingles on upper gable ends, simple multi-paned casement windows, dormer windows, prominent stone chimneys, and French doors opening onto patios with attached stone and timber pergolas.

How is it significant?
Bickleigh Vale is of aesthetic (landscape), scientific (horticultural), historical and architectural significance to the State of Victoria.

Why is it significant?
Bickleigh Vale is of aesthetic (landscape) significance as the major work of its creator, the gifted and single-minded landscape designer Edna Walling. Walling received her certificate from Burnley Horticultural College at the end of World War One and was one of the first women to establish a successful garden design practice. Her reputation was enhanced by her regular gardening column in the Australian Home Beautiful which popularised her ideas about gardens and their designs. The village survives as her largest single creation, and is significant for the retention of much of the landscape character as planned by Walling, and the survival of many cottages created or approved by Walling, as well as garden plantings inspired by Walling's writings and designs. The aesthetic quality of the landscape includes the apparently casual nature of the internal lanes, the character of the mature plantings, the continuous nature of the landscaping which permits glimpses of carefully sited cottages, and the complementary relationship between exotic and Australian plants.

Bickleigh Vale is of scientific (horticultural) significance for its many outstanding trees and plantings, including stands of rare oaks and other deciduous varieties. Numerous plants occurring at Bickleigh Vale were popularised by Edna Walling. Individual properties have plantings of horticultural and landscape value. This includes the following outstanding or rare oaks; two Quercus bicolor at 'Sonning' and another tree at 'The Barn', Quercus macrocarpa and Q. acutissima at 'Glencairn', a rare Quercusstellata at 'Sonning' and a very large Quercus ilex at 'The Barn' and 2 Quercus rubra at 'Winty'. In the 'Lynton Lee' garden are Quercus 'Macedon', Q. rubra, Q. macrocarpa, Q. nigra and Q. canariensis. Other outstanding deciduous trees are wide spreading Golden Elms (Ulmus glabra 'Lutescens') at 'Badgers Wood', an outstanding Zelkova serrata at 'Glencairn', an Algerian Oak (Quercus canariensis) at 'Locharden', and a large Hornbeam (Carpinus betulis) at 11 Bickleigh Vale Road. Both 'Sonning' and 'Lynton Lee' have impressive stands of Silver Birch (Betula pendula), and 2 Amelanchier canadensis at 'Winty', both popular Walling plantings. 'Lynton Lee' also has an uncommon Himalayan Pine (Pinus wallichiana), and at 'Badgers Wood' there is a wide spreading Hawthorn (Crataegus sp.) and at 'Locharden' a large stand of Tea-tree (Leptospermum sp.)'

Walling's own garden at 'Sonning' is significant for being largely intact with a wide variety of trees and shrubs including Sequoiadendron giganteum, Sequoia sempervirens, and Cupressus torulosa, beside the entrance gate, Pseudotsuga mensiezii and an outstanding Chamaecyparis funebris. 'The Cabin' has an impressive Callitris glaucophylla, and at 'Wimborne' there is a fine Chamaecyparis lawsonniana. Of horticultural significance are the Malus x purpurea 'Sonningensis' a crabapple selected about 1936-40 by Edna Walling from her garden 'Sonning' and planted at 'Lynton Lea' and 'Mistover'. There is a fine example of Rosa 'Edna Walling', a rose named in her honour, growing over the front of 'Glencairn'. 'Glencairn' also has an unusual moss lawn.

Bickleigh Vale is of historical significance for being conceived and developed some years before Walling gained recognition and achieved commercial success as a gardener. The subdivision plan, influenced by Walling is largely retained and is reflected in the spatial disposition and generally low density of residences, the major boundary plantings and fence lines, and the boundaries of roads and lanes. Bickleigh Vale attracted a small community of her female friends who lived at various times in the different cottages and houses. The Village is an extraordinary experiment in urban design and was during and beyond her lifetime an inspiration for her followers.

Bickleigh Vale is of architectural significance for the design of the cottages and houses, particularly for the harmonious combination of materials. Also of architectural significance are the hard landscape elements including ponds, stone walls, paving and other works which complement the design of the cottages and which together with the cottages exemplify Walling's individual and original approach to a unified and integrated cottage-village design ideal. Although many of the original cottages have been extended or altered, all retain significant Walling influence.