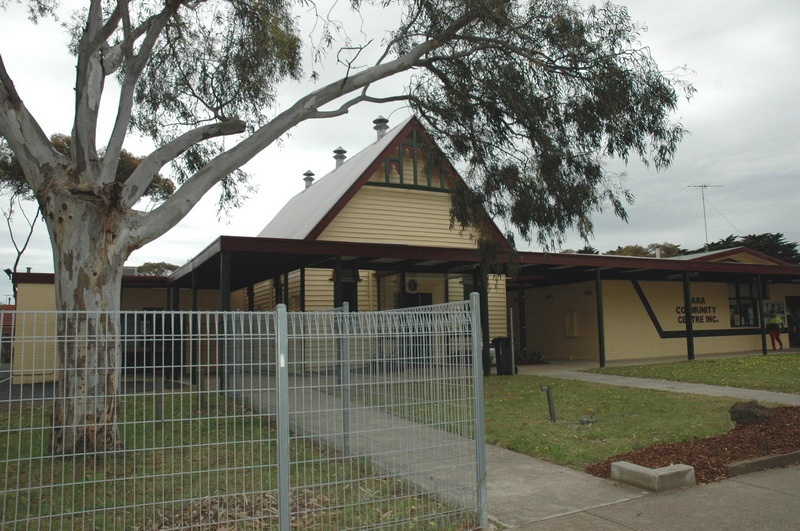 The Lara Community Centre (comprising the former Presbyterian Church building) at 11-15 Waverley Road, Lara, has significance as a physical legacy of the life and development of the local Presbyterian Church between 1909 and 1980, and as part of the Lara Community Centre from 1982. The significant fabric includes the Federation Carpenter Gothic styled former Church building characterised by a steeply pitched gable roof, narrow eaves with exposed timber rafters, timber weatherboard wall cladding, three metal ventilation stacks on the roof ridgeline, timber framed pointed-arched windows with projecting timber label moulds, front door opening (but not the doors), and the timber fretwork decoration in the front gable end. Also contributing to the significance of the place is the commemorative plaque to the lives of George Patrick and Mary Fairbairn who were tragically killed in 1935. The plaque is situated on an introduced stainless steel stand, having originally been located on the front Church gate (or fence) and now removed.

The former Presbyterian Church is architecturally significant as moderately intact example of a Federation Carpenter Gothic styled Church and the more intact surviving example of this design for a Church building in Lara (Criterion D). Although altered and extended, the original design of the building is clearly discernible from the front and much of the introduced fabric (when viewed from the front) appears to be reversible.

The former Presbyterian Church is historically significant for its associations with the evolution and development of the Presbyterian Church at Lara between 1909 and 1980 and with the establishment and growth of the local Community Centre from 1982 (Criteria A & H). The building also has associations with the Geelong architects, Laird and Buchan, and it represents one of a small number of Federation Carpenter Gothic styled Church buildings designed by them in the late 19th and very early 20th centuries.

The former Presbyterian Church is recognised and valued by sections of the local community for its past contribution to Presbyterian faith and faith education in Lara. It is also especially valued today as an important social hub for community groups and organisations (Criterion G).

The Fairbairn Memorial plaque is historically and socially significant as a marker commemorating the lives of George Patrick and Mary Fairbairn (nee Robertson) of Wooloomanata Homestead, who were tragically killed in an plane accident in 1935 (Criteria H & G).