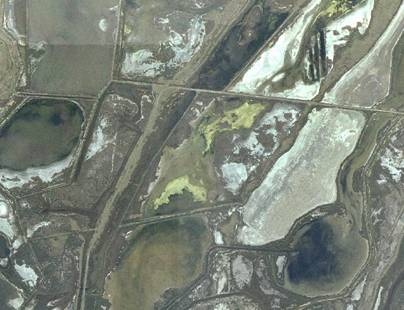 The Cheetham Salt Works (former), established in 1924 and operating until 1990, at Point Cook Road, Laverton.

The Cheetham Salt Works (former) is of local historic, technical and aesthetic significance to the City of Hobsons Bay.

Historically, it is significant for its strong associations with Richard Cheetham and Andrew W Cunningham, two important industrial entrepreneurs of the late nineteenth and early twentieth century and reflects their particular vision as well as the firm's expansion in the 1920s and 1930s. Cheetham Saltworks is the only remnant of this once major industry in this area and is now one of only two major saltworks surviving in the State. (AHC criteria A4, B2 and H1)

Technically and Scientifically, it is significant as perhaps the best surviving example in Victoria of an evaporative saltworks that is able to demonstrate the process as it was designed to operate using evaporative pans and manual harvesting, which was pioneered in Victoria by Richard Cheetham and reached its highest level in his Laverton and Geelong works. This is illustrated by surviving fabric and other elements include the evaporative pans, timber sluice gates, timber walled crystallizing pans (partly reconstructed), pumps and pump houses, earth channels and drains, remnants of narrow gauge tramways, workshops and refinery buildings. Although no longer used as an operating salt works the regime of maintaining variable water levels throughout the complex system is still maintained by Parks Victoria in its present role as a wetland environment and hence the original processes can still be interpreted today. (AHC criteria B2 and F1)

Aesthetically, Cheetham saltworks is significant as an evocative cultural landscape which is the result of the modification of the original salt marsh environment to include large still evaporation ponds, a labyrinth network of channels and levee banks covered in mostly indigenous vegetation with some exotic planting such as pine rows.