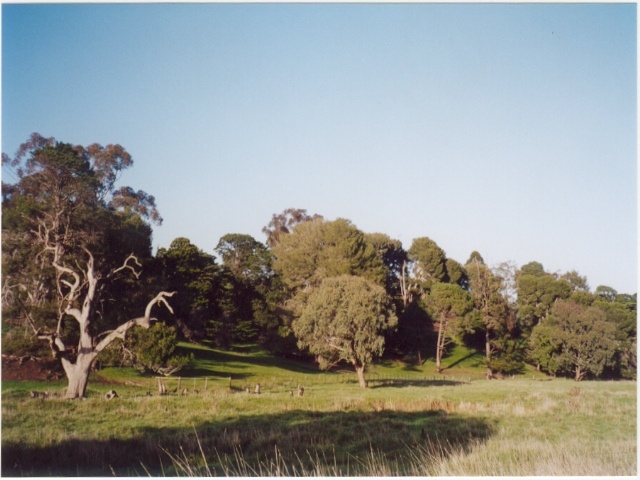 What is significant?
Konongwootong Creek Homestead site is a large ten acre site on the side of Red Bluff Hill, four kilometers north of the township of Coleraine. The site is roughly circular. There are several different plantings throughout the garden, including an unusually large and diverse conifer collection. Many of the plantings are mature or senescent, and in very poor condition. There is a large amount of dead plant material which is important as a record of species, type and density of planting. The footings of an extremely large homestead and servant's quarters are located in the eastern section of the garden. The ruins of smaller service buildings are located outside the garden perimeter to the north. A rare, gravity fed irrigation system survives throughout the garden, with associated dams, channels, pipes, cisterns and wells. The archaeological remains of a primitive gasworks are located a short distance west from the homestead footings.

How is it significant"
Konongwootong Creek Homestead site is of historical. scientific, aesthetic, and archaeological significance to the State of Victoria.

Why is it Significant.
Konongwootong Creek Homestead site is of historical significance to the State of Victoria as a representation of the rise and fall of the Western District pastoral aristocracy and the decline of pastoral dominance. Historically, it is important for its association with the Whyte Brothers, one of the earliest pioneering squatters in the area, and as a small part of the much larger run Konongwootong. It is of historical significance because of its close associations with the important McConochie family, particularly John McConochie who was heavily involved in the development of Coleraine as a township, and a Justice of the Peace.

Konongwootong Creek is of scientific significance to the State of Victoria for its rare examples of adaptation to harsh climates and remote locations. The development of gravity fed irrigation system complete with reservoirs, channels, cisterns, wells and pipes to adequately water a very large garden is highly innovative and scientifically significant. The archaeological remains of the gasworks are of scientific significance as they are a rare example of a primitive gasworks located on a pastoral homestead site.

Also of scientific significance is the botanical collection which the garden at Konongwootong Creek represents. Such a large and diverse collection is very rare for the period and remote location of the garden. The use of Australian specimen plants within the garden is also uncommon. All of the plant material (surviving or destroyed) within the garden is of scientific significance to the State of Victoria. Rather than representing a typical nineteenth century pleasure garden, the overall shape is unusually circular, and the plantings are in loose genus based groups, indicating an informed, sophisticated and possibly professional approach to plant collection.

Konongwootong Creek Homestead site is of aesthetic significance, as the former homestead was placed within the landscape to see and be seen, creating a prominent landmark, which is accentuated by the circular design of the garden, located on an otherwise bare steeply sloping hill. Also of aesthetic significance for its rarity in nineteenth century gardens is the carriage-way, which encircles the garden.

Konongwootong Creek Homestead is of archaeological significance to the State of Victoria for its important archaeological remains. These remains include the homestead, the kitchen, the servants quarters and courtyard, the outbuildings, the tennis court, the gasworks, the conservatory, the hothouse and all other structures which are either ruinous or demolished. The homestead itself is particularly important as one of the largest, most architecturally important homestead in the Western District. Also of archaeological significance are the ruinous stables and other outbuildings to the north of the garden perimeter.
Show more
Show less
All information on this page is maintained by Southern Grampians Shire. Click below for their website and contact details.