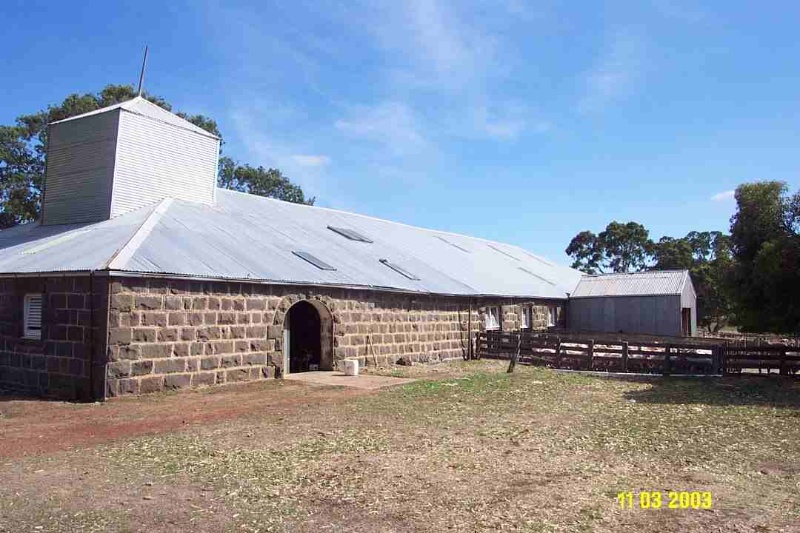 The South Mokanger Woolshed complex is located on the south side of Mokanger Road about 8.0kms east of the township of Cavendish and opposite the continuing Mokanger property. The bluestone woolshed was built in 1864 after the original timber woolshed burnt down. No architect or builder has been associated with the construction, although architects and engineers did design substantial woolsheds in the district at that time. It is said that the stonemasons were Scottish. There is nothing particularly unusual in its design, as at Kolor and Banemore. Rather, the woolshed is typically conservative and well built. The nearby stone cookhouse, which probably dates from before 1864, and the later men's quarters, are standard. Thomas and Andrew Chirnside, two of the earliest, most important and most successful squatters in Victoria, owned Mokanger at the time. Edward Barnett had taken up the Mokanger run in the early 1840s. The Chirnsides obtained the squatting licence in 1846 and held it until 1876. The Chirnside family was based at Werribee Park, Wyndham but visited Mokanger and used it to raise thoroughbreds as well as to grow wool. Mokanger, Mount William and Mount William Plains were known as their Wannon runs. In 1885, Alexander McEdward, another absentee landlord, purchased Mokanger. When his widow Alexandrina died in 1900, the AML&F Company took over the freehold land. In 1910, John William and Alice Gardner purchased Mokanger. The homestead block was sold in 1876 but the Gardiner family retains the 1864 woolshed and continues to use it. The three buildings retain a high degree of integrity and are in good condition.

How is it significant?
The South Mokanger Woolshed complex is of historical and architectural significance to the southern Grampians Shire.

Why is it significant?
The South Mokanger Woolshed complex is of historical significance for its direct associations with Thomas and Andrew Chirnside, two of the most important pastoralists in Victoria. The South Mokanger Woolshed complex is of architectural significance as one of the finest and best surviving woolsheds in the Western District, reflecting the values, interests and capacity of the Chirnsides, notwithstanding their absentee landlord status.