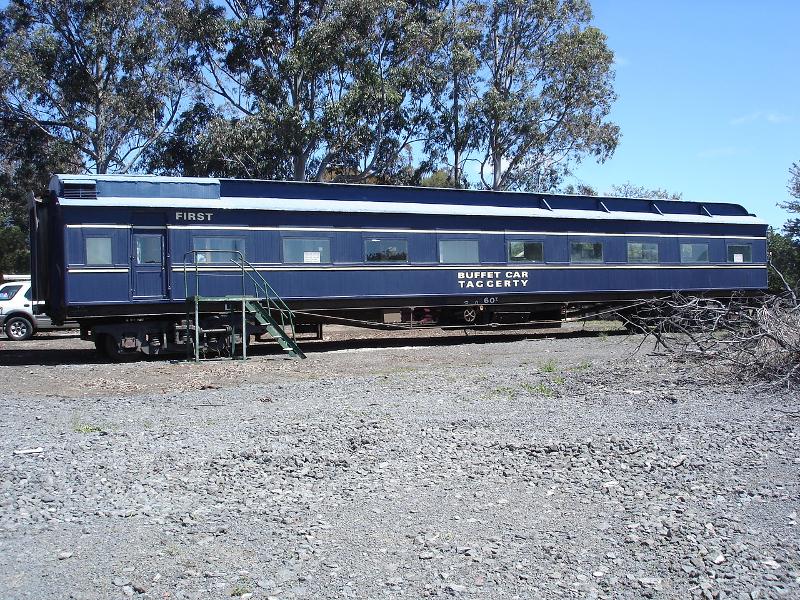 The air-conditioned, timber, composite buffet/sitting car named Taggerty which was used on the trains running between Melbourne and Bendigo from 1937 to 1981, and on other lines to 1987. It is currently located at the Donald Railway Heritage Park.

The Taggerty Buffet Car was originally built for the Victorian Railways (VR) in 1910 at the Newport Railway Workshops as the timber first class sitting car 34 AE. Passenger carriages were given numbers not names unlike special carriages such as buffet cars. Car 34 AE (now The Taggerty Buffet Car) was destroyed by fire in 1912 and rebuilt in 1914. In 1937 it was converted to a composite Buffet/Sitting Car with three compartments of first class seating and a long buffet counter. 'Composite' refers to a carriage that has both passenger seating and dining facilities. The converted carriage was named Taggerty, after the Victorian river in 1939.

The Taggerty Buffet Car was attached to the midday Bendigo - Melbourne and the evening Melbourne - Bendigo services. It operated on this line from 1937 to 1981, except for 1942 to 1949 when all buffet and dining cars including the Taggerty Buffet Car were removed from Victorian trains in order to save fuel during World War 2 and through postwar coal shortages. The inclusion of a buffet service on the Bendigo train permitted the elimination of refreshment stops reducing the trip time from over three to two and a half hours.

The Taggerty Buffet Car was never converted to standard gauge. The passenger section was designated first class also until 1981. From 1981 Taggerty was used on other lines besides Bendigo, and the first class seating for 18 passengers was changed to economy seating for 24 passengers. The Taggerty Buffet Car was withdrawn from service on 21 December 1987 and given to Steamrail Victoria Inc. who then sold it to the Donald Lions Club for display at the Donald Rail Heritage Centre in 2004.

The Taggerty Buffet Car is a timber clad composite buffet/sitting car on a steel underframe strengthened with paired truss rods and is approx. 23 metres long. The carriage is painted blue with gold (yellow) trim and lettering. It consists of a buffet area with a small kitchen in the present northern section of the train and three sitting compartments. The windows consist of fixed single panes of glass to stop passengers opening the windows when the air-conditioning was operating.

Stone's electro-mechanical air-conditioning system was installed in the carriages and the temperature and light indicators and switches are located in the electrical control panel. The pipes and some of the air-conditioning equipment is located in the clerestory roof at the compartment end, making the roof contour unusual and irregular, with a square shape at the widened equipment end, and exhaust louvres over the kitchen. The wheel mounted generator drum is missing.

The intact food preparation and serving benches, kitchen, dish washing area, grill, hotplate, Windsor oven, cupboard doors and refrigerated cabinets are stainless steel. The small kitchen is separated from the publicly visible area by a low screen. The shelves inside the cupboards are unpainted timber. Under the buffet counter the exteriors of the cabinets are painted teal blue.

There are three sitting compartments, which were designated first class and seated 18 passengers for most of the working life of Taggerty. In 1981 the first class seats were replaced with economy seats which accommodate 24 passengers across the three compartments. This is the current configuration. The compartments have blue upholstered seats and orange varnished timber with brass and mesh hat racks above the seats. The sitting compartments and corridors have varnished timber panelling, original pink linoleum flooring and new white painted ceilings.

The current site of display is part of the traditional land of the Dja Dja Wurrung Clans.

The Taggerty Buffet Car is of historical and scientific significance to the state of Victoria. It satisfies the following criterion for inclusion in the Victorian Heritage Register:

Criterion B Possession of uncommon, rare or endangered aspects of Victoria's cultural history.

The Taggerty Buffet Car is significant at the State level for the following reasons:

The Taggerty Buffet Car is significant for its association with the development of faster rail travel just prior to the introduction of the Spirit of Progress in November, 1937. The provision of food on trains allowed the elimination of stops at railway refreshment rooms. [Criterion A]

The Taggerty Buffet Car is the earliest surviving, largely intact composite buffet and sitting carriage in Victoria. It was introduced on Victorian rail services, mainly the Bendigo line from early 1937. [Criterion B]

The Taggerty Buffet Car with its largely intact interiors is significant for its capacity to evoke the age of rail passenger travel and tourism in Victoria for much of the twentieth century. [Criterion D]

The Taggerty Buffet Car is significant as one of the earliest examples of an air-conditioned railway carriage and the earliest surviving air-conditioned timber carriage in Victoria. Air-conditioning was an important and popular innovation in train travel and its presence encouraged more people to catch trains. [Criterion F]

The Taggerty Buffet Car's use as a test vehicle for the later air-conditioning systems for the later Spirit of Progress Buffet Cars is an example of the practical way that VR engineers designed, installed and tested new systems. [Criterion F]

Taggerty Buffet Car is also significant for the following reasons, but not at the State level:

Taggerty Buffet Car is significant to Bendigo and surrounds on account of its association with the trains which travelled between Bendigo and Melbourne from 1937 to 1981.