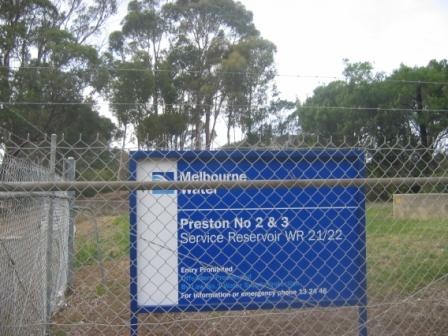 What is significant?
The Preston Reservoir complex was established in 1864 as part of the Yan Yean water supply system, which was Melbourne's first engineered water supply system. It originally comprised one reservoir, which is now known as Reservoir No.1, which was designed to regulate the pressure in the pipes, and provided a daily supply close to Melbourne. As Melbourne grew and the Maroondah system came on line additional storage capacity was needed and two new reservoirs were constructed in the early twentieth century. Preston reservoir No.2, constructed by John Monash's company, the Reinforced Concrete & Monier Pipe Construction Co., was completed in 1909. It measured 476 feet (166.6 metres) by 516 feet (157.4 m) and 17 feet (5.2) deep and had a capacity of 24.5 million gallons (111.5 megalitres). Unlike earth and massed concrete reservoirs, the inner walls were perpendicular, with the outer walls sloping. They were constructed in vertical panels rather than built up horizontally in courses, like puddle core or massed concrete. This meant that the building up of the earth embankment behind the reinforced concrete wall could not proceed evenly as the wall was raised, resulting in more cracking of the concrete than usually occurred with massed concrete. Edgar Ritchie, the Board's Engineer of Water Supply, later gave this as his reason for preferring massed concrete for service reservoirs and this was to be the only service reservoir to be constructed using this method. Preston Reservoir No.3, constructed of massed concrete, was completed in 1913. It measured 516 feet (157.5 m) by 502 feet (153.1 m), with a depth of 17 feet (5.2 m), and capacity of 26.3 million gallons (119.6 megalitres). The cost was £29,190. As the reservoirs were originally uncovered trees, mainly pines and cypresses, were planted around the perimeter to prevent dust and debris from blowing into the water. Both reservoirs have now been covered.

Other infrastructure and features are not significant.

How is it significant?
Reservoir Nos. 2 and 3 at Preston Reservoir complex are of local historic and technical significance to Darebin City.

Why is it significant?
Historically, Reservoir Nos. 2 and 3 at Preston Reservoir complex are significant as representative examples of the service reservoirs associated with the development of the Melbourne's water supply system in the early decades of the twentieth century. The reservoirs form an important part of the Preston Reservoir complex various components of the complex illustrate how the system was developed to improve the quality and quantity of supply and meet the demands of Melbourne as it grew in population. Other features of the complex that are of interest include the trees, which illustrate the use of vegetation to protect the water supply from effects of dust and debris. The reservoirs are important for their associations with the Melbourne Metropolitan Board of Works and provide evidence of the major works carried by the MMBW to secure Melbourne's water supply in the early twentieth century. Reservoir No.2 is also notable as an example of a reservoir constructed by John Monash's Reinforced Concrete & Monier Pipe Construction Co. (AHC criteria A.4, D.2, H.1)

The complex is technically significant for its demonstration of nineteenth and early twentieth century engineering technique and practice and illustrates the increasing use of concrete as a construction material. Reservoir No.2 is particular significance as perhaps the only example of a reinforced concrete service reservoir in Victoria. (AHC criterion F.1)