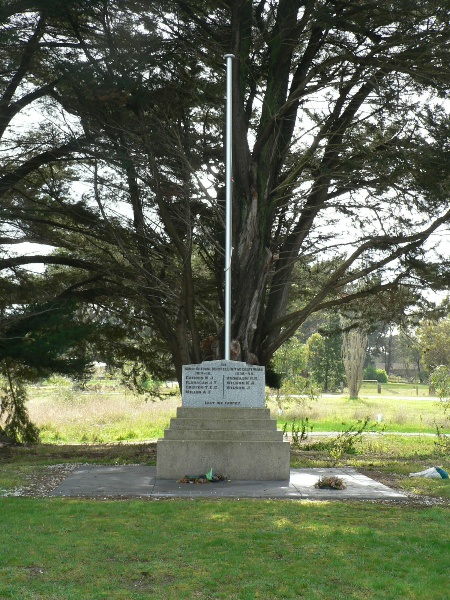 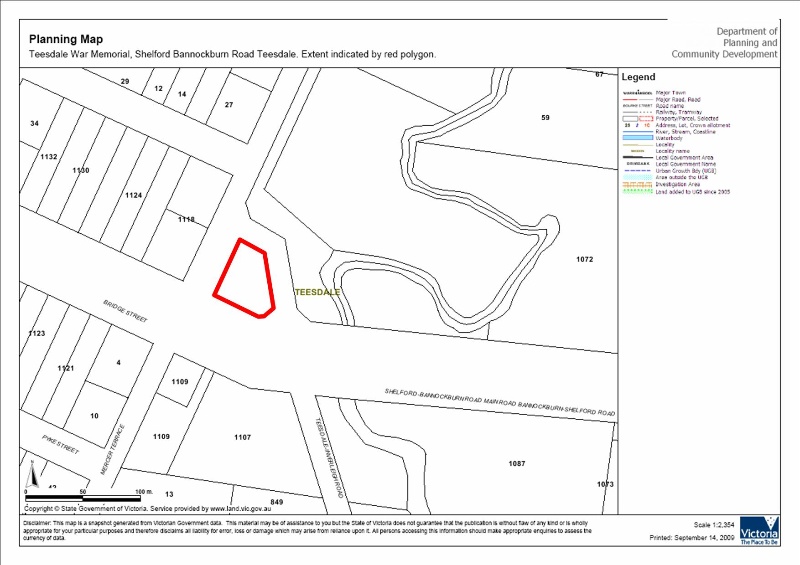 The Teesdale War Memorial is located on a triangular road reserve at the intersection of the Teesdale-Inverleigh Road and the Shelford-Bannockburn Road. It is set within a large grass verge which features a perimeter planting of seven Cupressus macrocarpa (Monterey Cyprus). It is situated adjacent to the crossing of the Native Hut Creek and the original settlement of Native Creek (now Teesdale). The war memorial consists of a single marble tablet mounted on top of a four-tiered concrete plinth. The names of the four soldiers who fell in the First World War, along with the names of three soldiers who fell in the Second World War are affixed onto the polished face of the marble tablet. The Teesdale War Memorial was erected by the Teesdale community in 1949 as a tribute to those who fell in each of the great wars.

The Teesdale War Memorial is of historic, social and aesthetic significance to the Teesdale Community and the Golden Plains Shire.

The Teesdale War Memorial is of historic significance for demonstrating the commitment of the Teesdale community in commemorating, at a local level, some of the most important events in the national history of Australia. The memorial is especially significant as a tribute to the roles of those from the local community who served, and particular those who fell in each of the great wars.

It is of social significance as the focus of acts of commemoration such as Anzac Day and Remembrance Day, and as a place of homage for the community.

It is of aesthetic significance for its form, style and iconography, as an expression of deep meaning and reflection. This significance is enhanced by its setting and location, in particular its proximity to the crossing of the Native Hut Creek, the nucleus of the original Teesdale settlement.