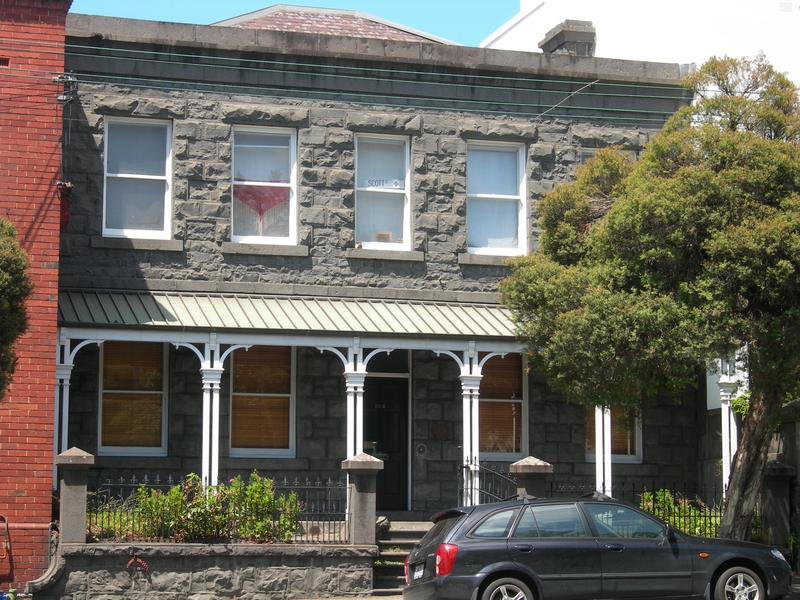 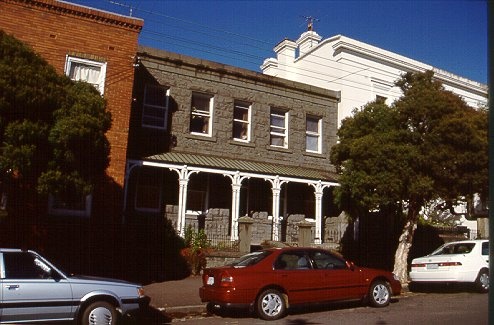 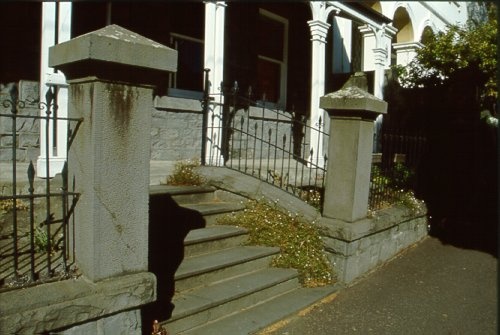 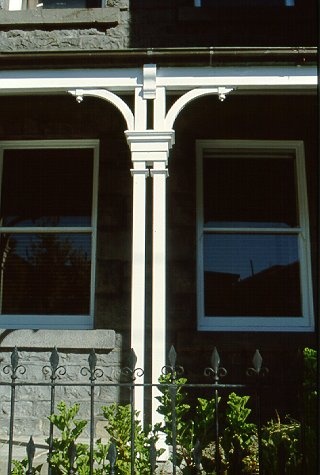 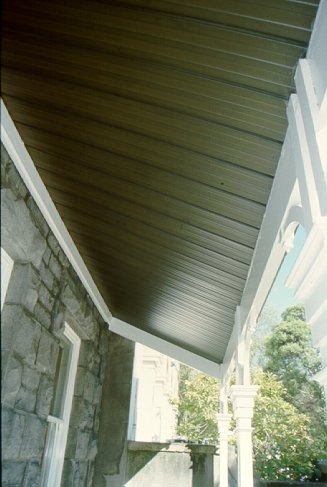 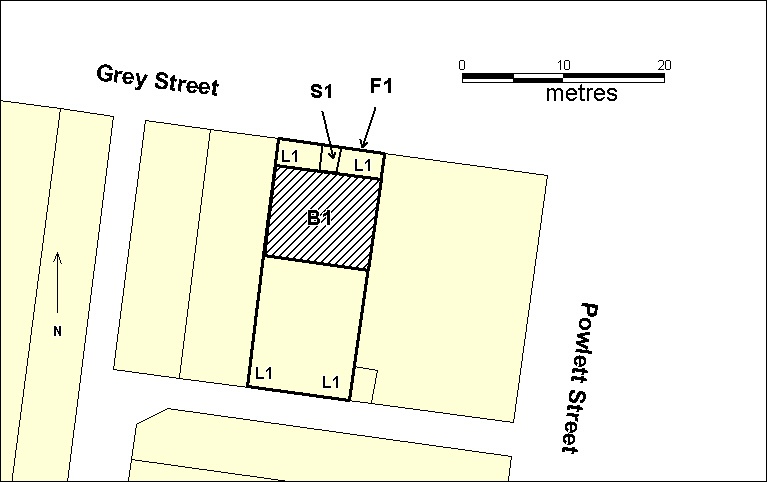 115 Grey Street is a two storey house built in early 1854. It was constructed only two years after the first Crown Allotment sales in East Melbourne. The walls are constructed of bluestone and the simple hipped roof is covered with slates. The symmetrical main facade is arranged as five bays with a horizontal emphasis. Masonry is ashlar quarry-faced bluestone with dressed quoins to all the openings and the wall returns. The main entrance is reached via bluestone steps which are flanked by a low bluestone wall with four pillars supporting a cast iron palisade fence. The fence complements the house although it is unlikely to date from 1854. The verandah is supported by six timber posts, each post comprising a pair of slim squared columns with simple capitals and quadrant bracket arms. The bracket arms terminate with delicate ornamental newel drops. The verandah roof is constructed from ribbed steel decking, an unfortunate replacement for what was originally corrugated iron sheeting. A small parapet completes the main facade. The rear facade of the original house is also symmetrical although composed of three rather than five bays. The rear stonework is irregular with thick mortar joints. Internally the house is simply arranged with four rooms to each floor about the central passageways running from the front to the rear. The layout from 1854 has been retained minus the internal stairs. A c1969 two storey breezeblock rear addition abuts the original structure.

115 Grey Street is of historical and architectural significance to the State of Victoria.

115 Grey Street is historically significant as one of earliest houses in East Melbourne. The house had a long association from 1854 to 1907 with the family of its builder and first owner, that of successful grain merchant Thomas Wilson.

115 Grey Street is architecturally significant as an unusual example of the survival of the Georgian style in domestic Melbourne architecture of the early 1850s. Contributing to the restrained styling is the unadorned ashlar stonework, plain parapet and the quoins to the windows. The internal plan is intact, its symmetrical layout emulating the facade. The form of the house, set back from the street but built right up to the side boundaries is unusual for a single residential unit. The form contrasts to the fashion for speculative terrace housing which became prevalent in East Melbourne in the 1860s.

115 Grey Street is architecturally significant for its bluestone construction, unusual for an East Melbourne town house. Brick and weatherboard types were considerably more prevalent in the 1850s. Very few residential properties were constructed entirely of stone because of the relative expense, and the use of ashlar bluestone in 1854 clearly identifies the house as the home of a successful owner. The regular coursing of the stonework contrasts to nearby Bishopscourt which was built at a similar date but whose random stonework was clearly meant to be stuccoed over.

115 Grey Street is architecturally significant for its verandah. The verandah is unusual as an example of timber frame construction before the fashion for cast iron in the early 1860s.