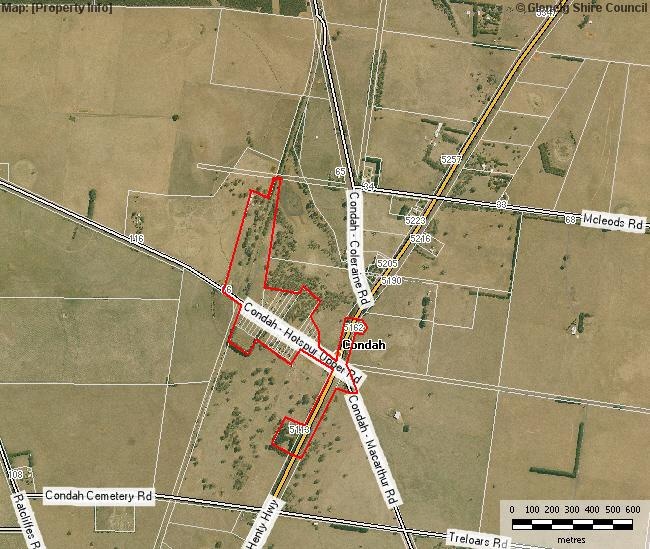 What is Significant?
The village of Condah formerly called Green Hills after a nearby squatting run, takes its present name from Lake Condah. It is located at the intersection of the Portland-Hamilton Road (the Henty Highway), the Condah-Hotspur Lower Road and the Condah-Coleraine Road. It also is located at the meeting point of the three most important runs in the area in the nineteenth century - Crawford, Bassett's and Whittlebury. All these runs date from the early 1840s and by 1844 Robert Taylor had a licence for the Fleece Inn at Green Hills. The town probably grew as a result of sub-division for Selection in the late 1860s and especially from the opening of the railway in 1876. The town may also have been boosted by the establishment of the Condah Co-operative Butter and Cheese Factory Company Ltd well to the north-east of the town in 1909. The route between the pubs and the station seems to have become the de facto main street, with its stores, post office and the Catholic Church. The two other churches, Anglican and Methodist are located on the highway, beyond the precinct. There was a branch of the Commercial Banking Corporation at the south-west corner of the highway and the main street. The banking chamber and manager's residence survive. The railway station is mostly gone but the water tower and a plantation of mature pines remain and some smaller buildings which were relocated closer to the town's centre. An important part of the town's heritage value is the space between buildings. The town is widely dispersed and its form is organic rather than being planned, in contrast to most of the townships in Glenelg Shire. The general store, owned by Clive 'Curly' Pettingill and his wife Daisy Emma Pettingill, operated until his death in 2000. The town retains much of its integrity and character with little intrusion but some of the buildings are in only fair condition.

How is it Significant?
The Condah Village Precinct is of historical, social and architectural significance to the Shire of Glenelg.

Why is it Significant?
The Condah Village Precinct is of historic significance as a township dating from the mid 1860s, and as the focus for the pastoral properties surrounding the township from as early as 1840. The disparate arrangement of surviving structures and archaeological sites is part of what makes it significant, as it represents the early, unchanged form of small rural towns from the nineteenth century. The range of buildings which survive are interesting in that they represent the various 'boom' periods of Condah, dating primarily from the mid 1850s, the late nineteenth century, and the early twentieth century. It is of social significance as the focus for the community's education, religious life and recreation, roles that it continues to fulfil. The architectural significance of the town lies in the range of buildings constructed from local materials over a long period of time, ranging from the larger religious buildings through to the humble timber cottages which remain.