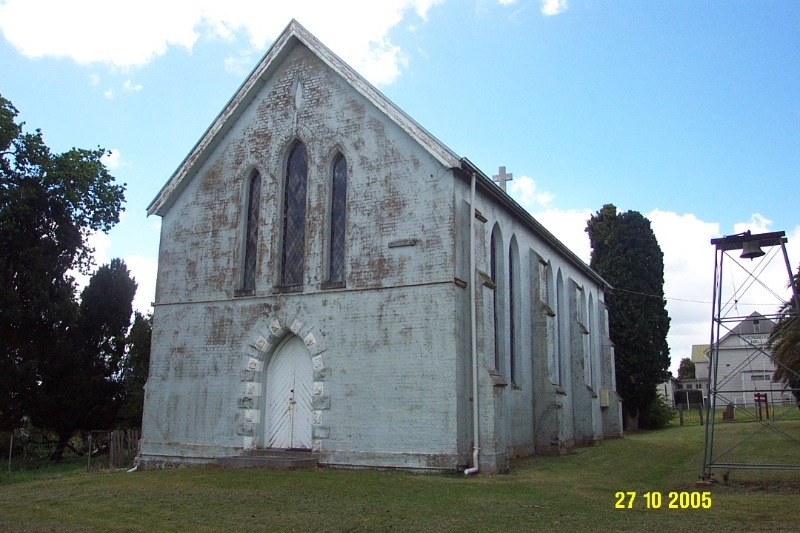 What is Significant?
St. John the Evangelist Anglican Church is a small but fine brick church in the Early English Gothic Revival style. It is situated on the west side of the Portland-Casterton Road, Digby on a sloping site overlooking the Stokes River (or Emu Creek) and is surrounded by mature exotic trees. It was the first of many churches commissioned by Rev. Dr. F.T.C. Russell, an influential clergyman in the early history of Glenelg Shire. Construction commenced in 1861 and, although the architect is not known, it may have been James Fox of Hamilton. The builder was a Mr. Jolly. The church is built of locally made red brick, now painted, and timber cut from local forests. It has a steep gable roof of early short-sheeted corrugated iron. The rectangular plan has three bays but with no apse or porch. The church has lancet windows with significant stained glass made by Fergusson and Urie of Melbourne and installed in 1864. The timber front doors are surrounded by an unusual Gothic arch framed with rock-faced stone quoins. The interior fittings and furnishings are particularly fine and reflect the Low Church values of its founder. They include a marble font, handwritten framed scripts (in Gothic lettering) and timber furnishings such as the pulpit, pews and font cubicle. The Church remains in very good condition with a very high degree of integrity.

How is it Significant?
St. John the Evangelist Anglican Church is of historical, social and architectural significance to the State of Victoria and the Glenelg Shire.

Why is it Significant?
St. John the Evangelist Anglican Church and its setting are of historical significance for representing the early influence and importance of the Anglican Church in Digby and the district generally. It demonstrates the dedication of the local congregation and its clergymen to establishing and consolidating religious order in the far Western District of Victoria. It is of particular historical significance for its direct association with Rev. Dr. F. T. C. Russell and as the first of his many commissions. St. John's Anglican Church is of social significance as the continuous focus for the congregation of Digby for over 140 years. The church is of architectural significance for its simple, almost austere use of the Gothic Revival style and the interiors are of particular architectural significance for reflecting the values and prosperity of the congregation.
Show more
Show less
All information on this page is maintained by Glenelg Shire. Click below for their website and contact details.