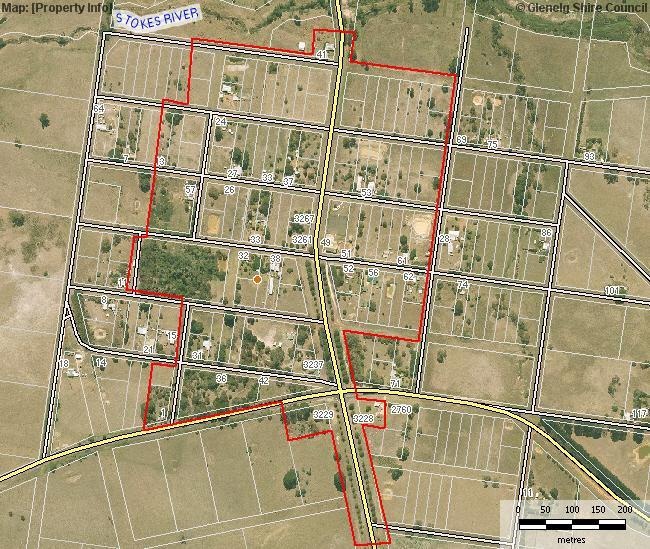 The present township of Digby, located on the Portland-Casterton Road, dates from the early 1860s and appears to have pre-empted the closer settlement afforded by the Land Selection Acts by several years. The first buildings were Lewis' Inn and Ottey's General Store, located on the southeast and southwest corners of Clarke and Crawford Streets, both dating from the early 1840s. These and a few other scattered buildings are noted in the plan of subdivision of the land, dated 1852. The town soon developed as a service centre for the timber getting district. There were no mills in the centre of the town, but Eldridge and Rice operated a steam saw mill at Digby from 1862, and many of the timber commercial and residential buildings are constructed of locally milled timber. The important commercial and civic buildings and heritage inventory sites relating to commerce are located in Clarke Street. These include the two churches, the Mechanics Institute, the Digby Hotel, the former Butcher's shop and the site of a number of important archaeological sites. The site of the former State School is located in the south west corner of the precinct, and is a large site with mature plantings. While the school has gone, the teacher's residence and the original school gatepost survive. Digby's fresh water springs is on the western boundary of the precinct. This historic area has a natural fresh water spring within it and was used initially as a source of fresh water, and later as a recreational place. The apparently vacant land along Stokes River is an important archaeological area. Until the 1940s, when a large flood cleared the area, there were a number of crude timber huts located in this area, believed to have been constructed as early as 1841. The huts were washed away in the floods of the Stokes River in the 1940s, but the land retains the potential to yield interesting material. The remainder of the precinct is residential, or residential with several subsistence allotments, traditionally used to keep animals and grow fruits and vegetables. Digby's housing stock follows the three main periods of development within the township - the very early settlement from 1840-1855, of which it appears little or no above ground fabric remains. The second period of development occurred between 1855-1875, when the timber industry expanded rapidly, as the influx of settlers created demand for timber construction in south west Victoria. There are a few examples of small cottages which were constructed in this period, the most intact being 1 Coldham Street, a small timber cottage with a substantial garden surrounding it. The third period of development was the interwar period, between 1918-1939, when a number of small timber shops were built, as well as simple timber dwellings. Many of these survive in varying degrees of intactness. World War One had a devastating effect on the population of Digby and district with almost half of the population enlisted. The Avenue of Honour along Clarke Street was planted to honour those men in August 1917 and is the earliest avenue in the Shire. In addition, a Soldiers Memorial Hall was erected in 1926, with funds raised from the community. Digby's private and public plantings are unique within the municipality. There are many mature specimens of Oak, Pine and Elm on private land within the township. Many of these appear to be between 90 - 120 years old, and are in very good condition. These trees add to the established historic character of the small village. Overall, the precinct retains a high degree of integrity and is in good condition.

How is it significant?
The Digby Village Precinct is of historic, cultural, social and architectural significance to the Glenelg Shire.

Why is it significant?
The Digby Village Precinct is of historic significance as one of the earliest settlements within the municipality. Its contributory elements (including a range of archaeological sites) are varied, and exhibit three distinct phases of development, which co-incide with pastoral and industrial development throughout the municipality. It is of further historical significance to the Shire of Glenelg as one of the chain of small settlements between Portland and Casterton, which developed as the major centres in the area, and for representing the emergence of various aspects of agriculture and timber getting in the area. Another historically significant aspect of the precinct is the layout of the village, and location of buildings which allows us to see a previous way of life, namely the way in which households participated in subsistence agriculture and horticulture in the nineteenth and early twentieth centuries.

It is of cultural significance as a predominantly Anglican and Wesleyan settlement, represented in its churches, their associated plantings and memorials. Of further cultural significance is the physical evidence of how the First World War affected the community of Digby, and the way in which the community honoured those who served in conflict. The Avenue of Honour and the Soldiers Memorial Hall are strong indicators of the community's values in this respect. It is of social significance as the focus for the community's education and recreation, roles that continue to the present. The architectural significance of the town lies in a range of commercial, civic and religious buildings constructed from local materials (particularly locally got timber) over a long period of time, ranging from the finer religious buildings through to the humble timber cottages which remain.